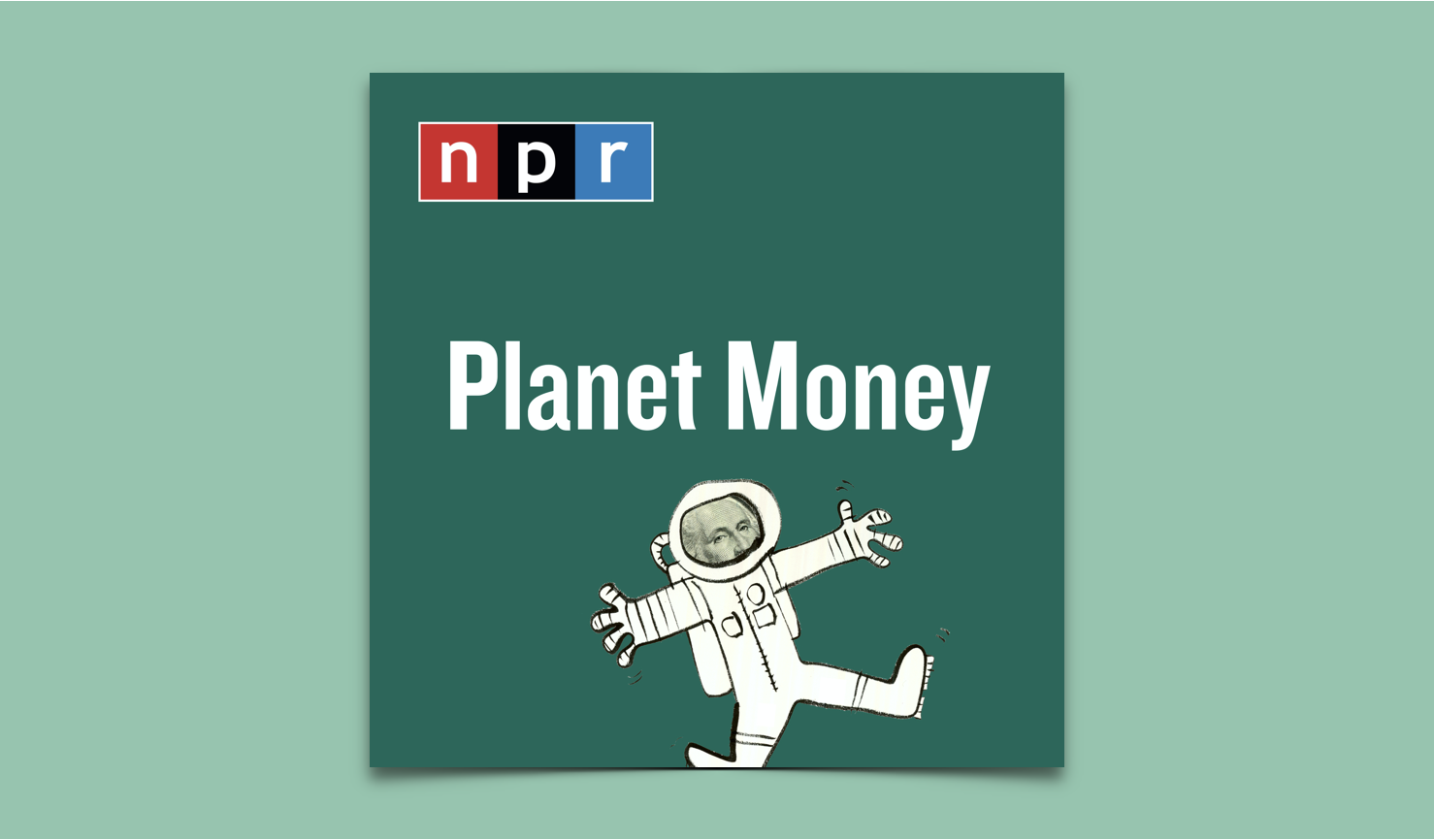 How does Planet Money, a decade-old, sometimes wonky show about the economy, remain one of the most downloaded podcasts in the world? Like other popular podcasts that sprang from public radio, the secret is in its storytelling.

The strength of Planet Money’s storytelling ties back to the granddaddy of narrative radio, This American Life, where the podcast’s ideas were first tested. In 2008, Alex Blumberg and Adam Davidson ran a story on This American Life called “The Giant Pool of Money,” which explained in great detail how the U.S. got itself into a housing crisis. The episode was an immediate hit, and the hunger for more knowledge around what the heck is going on led Blumberg and Davidson to create Planet Money, a show that explores how the economy really works.

The podcast’s approach to teaching economics is the antithesis to that of a dry economics textbook. You won’t hear or remember many definitions recited on Planet Money, but you’ll remember the people and the ideas that each story covers. Ultimately, the genius of the show is that the economy encompasses so much that it can be used as an almost infinite lens with which to explore the world. And who doesn’t want to understand the world a little better?

Narrowing the best episodes of Planet Money down to twenty was a surprisingly difficult task, but I found that the most compelling episodes were often those that took a concept that could be considered boring and instead made it exciting and relevant. As Planet Money approaches its 1000th episode, here are the podcast’s 20 best episodes listed in chronological order:

This episode explores the absurd prices that bizarre items can go for in the art world. Like a dead shark suspended in formaldehyde selling for $12 million when it’s from one artist but barely a fraction of that when it’s from another. Like so much of the economy, the art world is propped up by storytelling just as much as anything else.

Edgy high schoolers like to point out that money isn’t even real, man, but this episode illustrates that they actually do have a point. We take for granted how much our societies are built on collective beliefs that are, when you boil it down, completely made up. This was witnessed firsthand in Brazil in the 90s when this shared belief and confidence in the power of money was completely eroded. Inflation skyrocketed and the economy was in freefall. The actions taken by some economists to fix Brazil are an excellent lesson in just how psychological money and the economy are.

If I could sum up Planet Money’s opinion on the Dow Jones Industrial Average, it would be this: It stinks and we don’t like it. The Dow only covers 30 companies and they aren’t necessarily representative of the economy overall. A better option is look at the S&P 500 or total stock market instead, and to do so over a long period of time.

The “economy” was not something anyone talked about until the mid-20th century. It wasn’t until the invention of GDP that there was an ability to effectively compare economies and boil them down to one big number. In typical Planet Money fashion, this is an interesting and brief answer to a question most of us wouldn’t even think to ask.

One of the best rebuttals to the notion that women aren’t meant pursue math or programming. I think of this episode whenever people push back against initiatives meant to help diversify the field of computer science. The earliest programmers were almost entirely women and there is an explanation for why the participation of women in the computer science world took a sharp dive in the 80s while it continued to climb for other technical disciplines.

A concrete example of how understanding economics and psychology can prevent a textbook example of a bubble from popping. The company behind Magic: The Gathering actively and successfully managed their way through the same economic phenomenon that took out the Beanie Babies—and so many others.

Endicott Johnson was the largest shoe manufacturer in the world throughout the early 20th century and provided benefits to their employees that would seem over-the-top by the standards of today’s richest companies. This extreme level of welfare capitalism was a boon for employees if they were happy, but there was an anti-union, employee control component some felt as well. This episode is a partnership with Radio Diaries and is a fantastic look into the heyday of early U.S. industrial powerhouses.

I remember going and buying a Honey Crisp right after listening to this episode. It’s a fascinating look into the competitive and surprisingly trial-and-error-based world of creating new apple varieties. This is my favorite quote that sums up how easy it is to take for granted the huge variety of apples we now find in supermarkets: “When I was a kid, apples were garbage. They were called Red Delicious, and they were red. They were not delicious.”

650: The Business Genius Behind Get Out

Jason Blum created Blumhouse Productions and is responsible for the smash hit horror movie Get Out. His main strategy is similar to that of a venture capitalist, where a high volume of low-budget movies is produced in the hopes that one of them will blow up huge at the box office. This atypical approach for a movie studio combined with a bluntly honest personality and a policy of never allowing directors (no matter how big) to go over budget all lead to a compelling snapshot into the future of independent movies.

A farmer tries to do the right thing and embraces a more organic approach to farming. He changes how he does everything, including adding free range chickens to help naturally fertilize the grass instead of relying on the synthetic options. Unfortunately, Bald Eagles live in the area and they really, really like to eat chickens. This episode was an instant classic that has been replayed on the feed many times.

The world is moving increasingly faster and faster at a pace never seen before. Right? Well, it turns out, not really. This episodes makes a compelling argument that the industrial revolution brought on changes that make the last fifty years seem pretty minor in comparison.

This episodes tells the wild story of Oneida, a silverware company that was once a household name across the U.S. It involves a commune, free love, and borderline cult behavior. Who said economics is boring?

If you’ve have seen the Nosedive episode of Black Mirror, the new social rating system in China that is detailed in this episode is eerily similar. The U.S. has credit scores and many different forms of social control, of course, but the scale of China’s new system is unprecedented and alarming to hear about from one of its victims.

Reporter Kenny Malone happens to be related to Jeopardy master James Holzhauer and as listeners we get to reap the benefits of this happy coincidence. Even though Holzhauer’s rein is over, this light-hearted episode contains some deep insights into sports betting and game strategy.

932: Deep Learning with The Elephants

One of the best explanations of machine learning and neural nets comes from a podcast episode about economics that features elephants, of all places. This is a great example of multiple disciplines working together to solve problems in ways that wouldn’t have been possible even a few years ago.

This episode ties many dynamics together in a beautiful way. Incentives, pharmaceutical development timelines, entrepreneurial spirit, the science of anti-venom, and pure luck. Also, terrifying snake bite statistics. Like that millions of people are bitten by snakes every year and over a hundred thousand die.

962: Advanced Fairness at The Marathon

Among the things I can thank Planet Money for teaching me over the years is, to borrow a quote from Office Space, what exactly an economist would say they do here. If you asked me what an economist does a decade ago, I probably would have run out of ideas after saying they teach economics. This episode is an excellent peek into the types of questions that economists were born to answer. Namely, how do you set up the acceptance into the NYC marathon in the most equitable way?

Below are three stories that each explore one slice of the economy from start to finish, but which are told in multi-episode arcs:

It started as a simple question: What goes into making a t-shirt? The answer turned out to be anything but simple. In this series, we are taken on a journey deep into globalism itself, where everything is interconnected and where it’s almost impossible to wrap your head around the moving parts for even the simplest of consumer goods. The journey from cotton fields to delivered products provides a view of the economy that is rare in its scope.

What goes into buying a barrel of oil? The team bought a hundred barrels of oil and tracked them through their whole life cycle, from an oil field in Kansas all the way to a gas station. Planet Money gets bonus points for referencing several times one of my favorite movies of all time, There Will be Blood, which is loosely based on Oil! by Upton Sinclair.

Planet Money goes to space! The Planet Money team procured (borrowed) their very own loaf of bread sized satellite (CubeSat) and set on an adventure to learn about the state of the private space economy. They learn the different uses of CubeSats and navigate how to actually get it into orbit. It turns out that SpaceX isn’t the only cool thing going on in the private space sector.