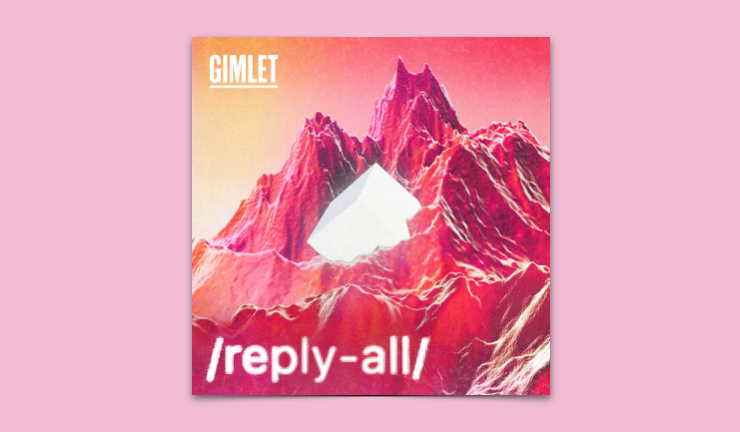 Reply All is one of my safest recommendations for getting people excited about podcasts. When a new episode drops, you never quite know what to expect, but you can count on it being great. Though the show started with the simple premise of being “about the internet,” Reply All has established itself as a consistently excellent, genre-expanding podcast.

Much of Reply All’s success can be pinned on the chemistry between hosts PJ Vogt and Alex Goldman. Their genuine reactions to each other’s stories — Vogt and Goldman often report independently, keeping the other in the dark until late in the recording process — are just as important to the episodes as the stories themselves. I can’t imagine enjoying “The Case of the Missing Hit” as much as I did, for example, without hearing Goldman’s roller coaster of emotions that mirrored my own.

Another highlight of the show is its storytelling. Reply All has made an art out of taking an intriguing but unremarkable incident and turning it into a fascinating mystery. Their winding journeys in search of uncovering “the truth” almost always stick the landing. This is true whether the episode is a piece of serious investigative journalism or a light-hearted discussion about Tide Pod memes.

The best Reply All episodes can easily hold their own in the pantheon of the best podcast episodes ever. Here are the best 15 to start with:

Episode 16: Why is Mason Reese Crying?

This episode was my first introduction to Jonathan Goldstein, who reported the story. I had never heard his beloved CBC show, Wiretap, his stories on This American Life, or his excellent current show, Heavyweight. He speaks in a uniquely self-deprecating tone and always brings an obsessive focus to his stories. This episode is a slightly melancholy exploration of 70’s child star Mason Reese, who is known mainly from popular commercials and talk show appearances. Goldstein finds himself watching one particular clip over and over again, and eventually gets to ask Reese about it.

I was a new father when I first heard this episode, and it’s probably the most emotional I’ve felt while listening to Reply All. It’s about a one-year-old boy who is diagnosed with terminal cancer and his father’s attempt to represent the pain and grief from losing a young child in the form of a video game. Not an easy listen but an incredible story.

A video goes viral of a rat carrying a piece of pizza down a flight of stairs. A rat wakes up a man in the subway after taking a picture with his phone. Are these simply strange occurrences that go hand-in-hand with living in a large city, or is it an elaborate hoax from a mysterious sorcerer? An important episode for Reply All lore and a wild ride.

As with many Reply All episodes, I can remember where I was when I first listened to this one. It was like hearing a great song that rattles pleasantly around your head for the next few days. The title, episode opening, and vague episode description (“To reach a port, we must set sail”) all made me immediately intrigued. The focus of the episode is straightforward: finding out the fate of a boy in a photograph that was the obsession of a late 90’s message board. Making such a riveting episode out of such a simple premise is a testament to the storytelling ability of the Reply All team.

Episode 86: Man of the People

As much as I dislike pseudoscience, there is something compelling in hearing about the persistent huckster-entrepreneurialism that accompanies the most successful peddlers of BS. The star of this episode, John Brinkley, is perhaps the greatest huckster lost to American history. Brinkley made his mark at the dawn of the radio era, the first tool of instant mass communication, hawking a fake impotence treatment, but his story of media manipulation, misinformation and outright fraud feel right at home in contemporary America.

Alex Goldman is tired of phone scammers. Like Liam Neeson in Taken, Alex has just the right skillset to hunt them down. Part revenge tale against scammers and part international thriller, Alex goes on a real odyssey in this episode.

Episode 104: The Case of the Phantom Caller

Reply All specializes in trying to get to the bottom of unexplainable internet phenomena. Someone keeps getting unsettling calls at work of odd recorded noises and needs help figuring out what the scam is. Vogt hits many dead-ends as he talks to journalists and experts who deal with these kinds of issues, and the ultimate answer speaks to the highly creative nature of forging new phone-based crimes.

There is a recurring segment on the show called “Yes, Yes, No.” Vogt and Goldman’s boss, Alex Blumberg, comes to them with a meme-filled tweet he finds completely inexplicable, and asks them to help break it down. Even though this episode is from 2018, an eternity ago in internet culture, it can still be appreciated for the density of meaning packed into this one tweet and the obvious fun PJ and Alex have in enlightening Blumberg.

There is something unsettling about this episode. It’s a peek into the bizarre, drama-filled world of YouTube niches, and of the damaging effects of inviting millions of people into your personal life. Sruthi Pinnamaneni profiles Taylor Nicole Dean, who was a break-out star within the “exotic pets” corner of YouTube. After listening, you’ll probably wince every time you see “YouTube celebrity” as a career goal for upcoming generations.

There’s a certain level of clout that comes from owning a one-word social media handle. The owner of the Snapchat handle “lizard” finds herself on the wrong end of a group of hackers who covet her account. Great reporting on the psychology of hacker behavior and some of my favorite banter between Vogt and Goldman make this episode stand out. Goldman frequently sets himself up for harassment by Vogt, who knows how to mercilessly capitalize on these opportunities. This episode also forever canonized the phrase “weird flex but ok” in the Reply All community.

The Chinese company Foxconn wanted to find a small American town where they could build a factory in exchange for tax benefits. They settled on Mount Pleasant, in Wisconsin. The battle that ensues between the locals who realize they are getting fleeced and the politicians desperate for a win nearly destroys the town. This episode highlights the talents and investigative reporting chops of producer Sruthi Pinnamaneni.

Seeing this title made me expect some kind of crossover episode with 99% Invisible, but I never expected the delightful and completely unplanned nature of this episode’s overlap. A man has a very specific problem while listening to podcasts in his Mazda. Everything works fine until 99% Invisible comes on and bricks the whole audio system. No other show could have made the journey of getting to the bottom of this technology bug so entertaining.

This story starts with a viral tweet from a “rural American” who inserts himself into a Twitter debate about assault rifles with a decidedly novel rationale for owning these weapons. Instead of one more tired entry into the debate on gun control, this episode is a riveting investigation into the invasive, fecund species of feral hogs wreaking havoc across the land. Living in NY, I am sheltered from the feral hogs stampeding across backyards, decimating farms, and rapidly multiplying beyond control in many parts of the U.S., but I am at least aware of one more problem threatening to destroy the country.

Episode 158: The Case of the Missing Hit

PJ hears about a man trying to track down a song from the 90’s that is still stuck in his head. Even though he remembers some of the lyrics, nothing comes up on his Google searches. Knowing too much about this episode does a disservice to the wild ride of listening to it. Go in as blind as you can, but know the episode has an unbelievable payoff.