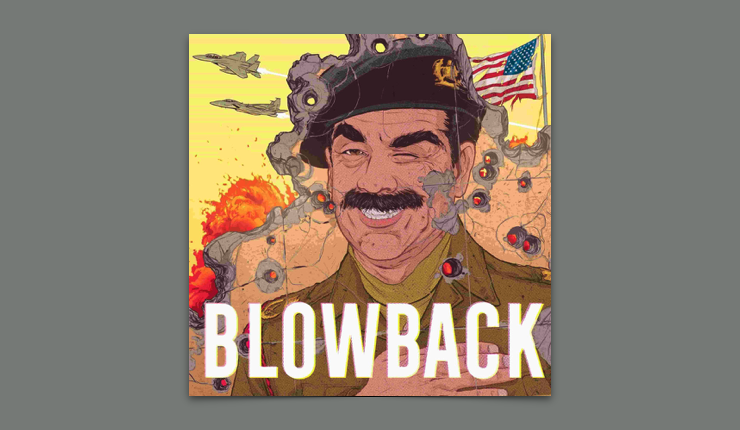 In the most generous retelling of the planning and execution of the Iraq War, the Bush administration’s total incompetence and dedication to faulty intelligence led the US into a multi-year occupation of Iraq, killing hundreds of thousands and devastating quality of life in the region for decades to come. That’s to say nothing of the deviousness of the venture, the deliberate cooking up of the war that took place between September 2001 and March 2003. To learn anything from the Iraq War, you must understand the dueling features of the United States’ failure: unprecedented dishonesty and unprecedented stupidity. Blowback, a podcast from Brendan James and Noah Kulwin, gives a rich history of both.

Blowback, as its hosts explain in their introductory episode, is history with a perspective. 17 years after the initial attack on Baghdad, wondering whether the war was just or executed in good faith is a ridiculous exercise. Blowback instead studies how a war was created out of a patchwork of lies and false connections, and how the most expensive military in the world lost control of its war plans immediately. The whole saga is treated with the absurdity that Bush’s bumbling defense and intelligence teams deserve.

Most importantly, the podcast spends as much time on post-colonial Iraqi history as it does on US politics. The American imagination of Iraq is inseparable from Saddam Hussein, a historical side effect of the narrow War-era depiction of the country as one dominated by a dictator. Blowback takes time to break down the multiple political forces vying for power over the last six decades in the country, and the many different relationships the US had to Saddam.

The 10-part series takes the long view. The goal is to understand the country that existed before US military and economic intervention intensified during the late ‘80s and through the ‘90s, and the devastation the US brought to Iraq long before 2003.

Perhaps the top priority of the podcast is to catalogue the lies that the Bush administration got away with. The big ones we remember — the links between Osama Bin Laden and Saddam Hussein, the presence of WMD in Iraq — are made up of so many individual pieces of false or created intelligence that each deserve attention. A decent amount of these lies came from Ahmed Chalabi, the Iraqi expat and enemy of Saddam whose gift for corruption is a major subplot of Blowback. James and Kulwin have their favorite characters in the saga (Chalabi, Douglas Fife, Paul Bremer), whose ill-will, stupidity, and rotten political instincts receive as much time as George Bush’s. Blowback reminds us of the vast cast of characters that manufactured the war, that it’s not enough to blame it all on the outright evil of Cheney and Rumsfeld.

Kulwin, who writes for Jewish Currents, and James, who used to produce Chapo Trap House, naturally turn their attention to the media’s inadequacy. It remains astounding how little coercion the Bush administration had to practice to get their lies into major newspapers; the publishers were happy to print them. Blowback investigates the push-and-pull between the WMD misinformation that the New York Times and Washington Post took as fact, with the decent, skeptical journalism that regularly appeared buried deep inside those newspapers. Kulwin and James wisely use the mainstream media’s own reporting to disprove the stories those same outlets published on their front pages.

Blowback is at its strongest and most serious when taking toll of the brutality of American intervention. The show dedicates a particularly worth-your-time episode, “American Psycho,” to the war crimes propagated in the first Gulf War, and the economic sanctions that killed hundreds of thousands of Iraqi’s by cutting them off from basic resources. US intervention in Iraq throughout the H.W. Bush, Clinton, and W. Bush administrations is not simply still “felt” today; rather, chemical weapon after-effects in Fallujah and the reduced electrical grid across the country will continue to kill for generations to come.

Blowback’s point is that moral outrage against the War in Iraq must remain in our political consciousness. Its history should not be considered another American military slip-up, but a moral disaster that devastated a country of millions and set new American precedents for deceit and ineptitude.