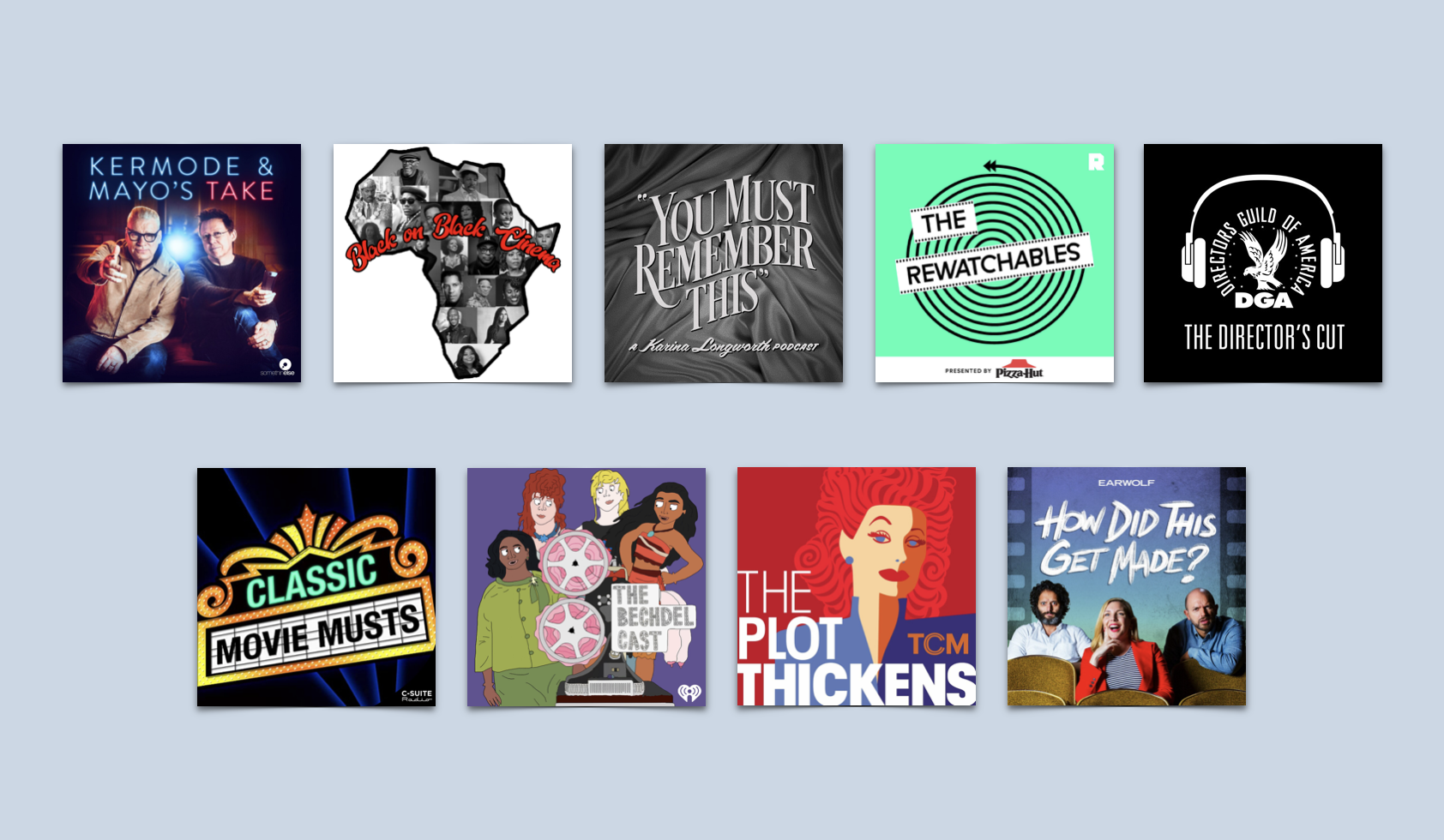 Film is an artform where discussion can be as integral as watching. After all, what do you do after sitting in silence in the theatre for two hours? You go for a drink and talk about the movie. Everyone loves to discuss movies, so it’s no surprise that the film podcast scene is flourishing.

And just like the movies they discuss, film podcasts are full of tropes. There’s the “laugh about how terrible this movie is” trope. The “alienating niche film references” trope. Oh, and the “no-laughing-allowed, let’s talk about how politically insensitive this film is” trope. Any of these approaches can make for blockbuster podcasting, just as any of them can make for a box office dud. It’s like the difference between Goodfellas and John Travolta’s Gotti. They’re both mafia movies, telling epic tales of masculinity and hubris. But find me a critic that mentions Robert de Niro and John Travolta’s performances in the same breath, and I’ll show you someone paid off by the mob. Great movie podcasts add to the conversation around a film and avoid mere self-indulgence — here’s a breakdown of the best.

If you’ve been mourning the end of the hugely popular Kermode on Film show, worry not. Britain’s “most loved film critic” has returned after a short hiatus to launch this new podcast with his long-time co-host, Simon Mayo. It all seems suspiciously similar: on-the-fly reviews, interviews with every A-List actor you can think of, and a slew of industry anecdotes. But it’s not all the same. They’re now talking about film-adjacent TV, too.

The jury’s still out on whether these two actually like each other. They bicker, interrupt and snipe, often hilariously. This argumentative format is all part of the experience, though. Don’t let the playful cynicism fool you; Kermode speaks eloquently about his love of cinema, and his honesty convinces.

How Did This Get Made?

What do the films Sharknado, Piranhaconda, and Zombeavers have in common? Besides starring water-based baddies, they’re all films we know are bad, but that we watch anyway because — eh, *shrugs* — sometimes you need reminding that you’re smarter than something. Cue How Did This Get Made?, the passion project of actors Paul Scheer, June Diane Raphael, and Jason Mantzoukas. The trio sit around a table twice a week to giggle at the plot holes, ludicrous dialogue, and dire acting in audience-picked “bad” movies. You’re probably best off watching the films first so you can gloat along. Chemistry and comic timing make this show a lot of fun.

You Must Remember This

Many movie podcasts re-live both the good and awful bits of the film you watched last night. Judging by the name, You Must Remember This might fool you into thinking it’s just that. But au contraire. Presented by Karina Longworth, this long-running podcast is a meticulously researched investigation into twentieth-century Hollywood, uncovering its “secret and/or forgotten histories.” Invariably, those shiny Hollywood images are not how you remembered them. Longworth is an author as well as a film critic, and these “podcast-essays” unfold like stories. She is currently embarking on a deep dive into Hollywood’s “Erotic Eighties,, an investigation into how the pornographic made its way into movie theatres. You Must Remember This is my pick for the most entertaining and informative film podcast.

What goes into directing a film? You need an artistic vision, the nous to coax incredible performances from actors, and the ability to deal with the onslaught of inevitable delays and disasters that are part and parcel of making a film. Want to find out more? Look no further than this podcast produced by the lofty Director’s Guild of America, wherein the industry’s most lauded auteurs give their insights into how today’s best films are being made. Expect mostly male perspectives and plenty of nepotism. Nevertheless, this is essential listening for aspiring directors and the generally film-obsessed.

Just because Hollywood abounds with morally questionable big-wigs and nefarious practices doesn’t mean film podcasts have just to accept that. Take The Bechdel Cast for instance. It casts a critical eye on popular movies, inquiring whether they hold up to feminist and intersectional scrutiny. Taking the Bechdel Test as its jumping-off point (Are there at least two women talking in this movie? Great! Now, do they talk about anything besides a man?), the show counters male-dominated Hollywood with astute, against-the-grain commentary, exploring the misogyny, homophobia, and racism that creep into a major director’s work.

You may know host Jamie Loftus from her brilliant Lolita Podcast, and this show delivers a similar cultural critique. It should be noted that the hosts can sometimes oversimplify a film or a director’s intentions (see the episode on Mulholland Drive). Nonetheless, this podcast will appeal to film enthusiasts sick of the patriarchy’s stranglehold over the film industry.

Have you ever looked at the comments section of an avant-garde film on MUBI? You’ll find, without fail, a glut of semi-coherent blathering. Think film-grads typing out grandiloquent monologues on the meaning of life, and how they glimpsed it in the film. Ultimately these comments demonstrate little more than the viewers’ ability to watch and enjoy a movie — a self-satisfied testament to their urbanity. Bravo, chap. Good for you. If you’re after seminal work, you might as well open an incognito browser and watch a completely different type of film.

Perhaps these film buffs are better off checking out Classic Movie Musts instead. Host Max Baril and his guests produce essayistic commentaries on classic films with appreciation very much in mind. The podcast offers a literary perspective, exploring the aesthetic and directorial decisions that make the classics brilliant. Expect interesting takes on the formal elements of camera work, set design, and narrative meaning.

Tired of film commentary whitewashing Black cinema and the slew of “Black” films engineered for white audiences, Black on Black Cinema began as a conversation by and for a Black audience. Films aren’t just a form of escapism, as hosts Terrence, Jay, Micah, and T’ara are well aware. For over seven years, this excellent podcast has been interspersing episodes focused on the issues of contemporary America with discussions of Black cinema. The show vibrates with the tensions that make cultural and political life in the United States seep into each other. But there’s no film jargon here and no doom and gloom despite it all. Each week, these hosts sit down for a casual but informed chat, throwing out opinions and laugh-out-loud jokes like they’re talking over a few beers.

It’s not unheard of for a film to be based on a podcast. Indeed, Lulu Wang’s The Farewell started as an episode of This American Life. The rollercoaster lives of the Hollywood stars chronicled on TMC’s The Plot Thickens could similarly be fodder for a biopic. Having previously explored the life of director Peter Bogdanovic and the (questionable) adaptation of Tom Wolfe’s The Bonfire of the Vanities, the latest season of this podcast is dedicated to Lucille Ball. Charting the up-and-down career of the much-loved actress, the series presents Hollywood as seen through the prism of the American Dream.

Now for some bargain basement fun. Sometimes, there’s nothing more enjoyable than a hypothetical. Like, “Which movie directors are on your Mount Rushmore?” The Rewatchables offers lighthearted film commentary frequently using another pillar of American culture as its reference point: sports. You might expect as much from a show hosted by much-loved sports analyst Bill Simmons, who brings on a revolving door of co-hosts associated with The Ringer. The show scores regularly, but its locker room banter can occasionally bore. Sometimes it’s a pleasure to be in the audience; other times you wonder why you’re sat in the nosebleeds with a soggy bowl of nachos.

Matthew Seaton is a writer based in Glasgow. His work has appeared in Erato Magazine and The Dillydoun Review and he is a founding editor of the event-zine chewgulpspit. He is currently completing a Master’s degree in Creative Writing. You can contact him at [email protected]