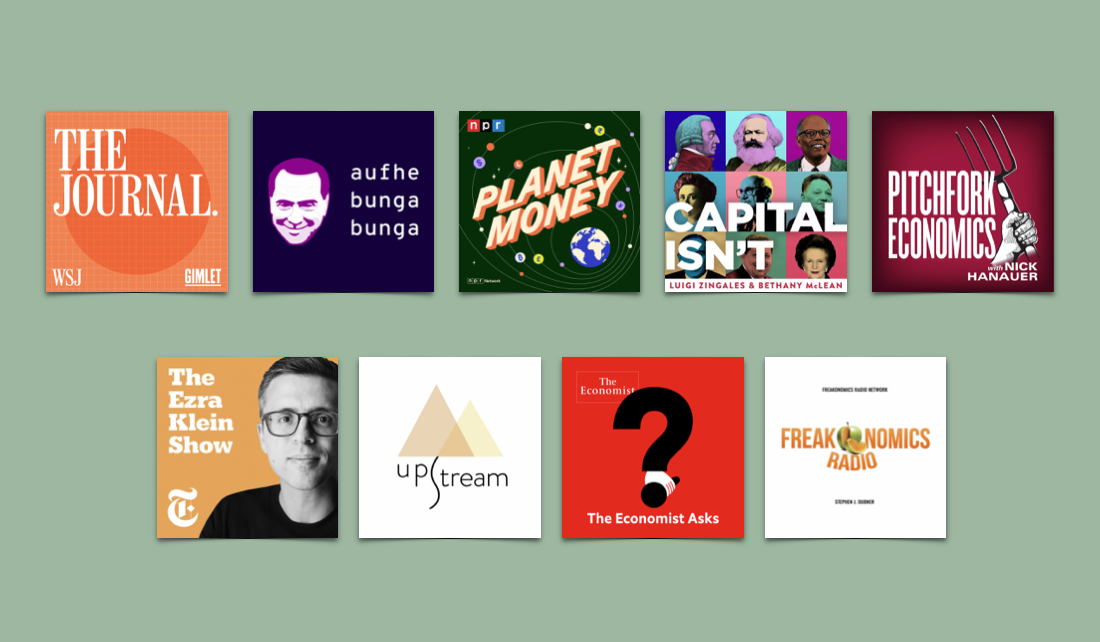 Whether you’ve attended business school or learned everything you know about mortgages from Animal Crossing, economics saturates almost every aspect of our lives — and this is reflected in the many podcasts dedicated to the subject. From lessons in investment to deep dives into central banking, what may on the surface seem like a boring field proves to be diverse and thought-provoking. And while some might scoff at the efficacy of learning everything you know about money from a podcast, well, at least it’s not an animated raccoon.

Unlike other podcast genres, it’s hard to say what immediately distinguishes a great economics podcast from a bad one. It’s more complicated than sorting fact from fiction, since economic discourse is invariably linked with politics. Assessing economic analysis, then, is less a question of right or wrong and more often a matter of opinion. What ultimately distinguishes each of these podcasts is their creative ways of delivering a narrative — and their ability to start conversations rather than shut them down.

Not everyone wants to sit around a bar talking about money, but if you’re a newbie to the world of economics, a good chinwag about inflation over a trendy craft beer is a great place to begin. In the absence of money-savvy friends, tune in to the hosts of Planet Money. Alex Blumberg and Adam Davidson created the podcast after the success of their episode “The Giant Pool of Money” on This American Life. Fans admired the podcast’s entertaining script and creative approach to economic discourse. Then came Planet Money, which started with a bang by covering the 2008 financial crisis. Now, over a decade later, the show remains wildly popular under its current team of hosts.

Covering topics spanning healthcare, investing, and financial fraud, the show’s hosts are consistent in making every topic easy to understand. If you’re feeling intimidated by its vast archive, our own Erik Jones rounded up the twenty best episodes of Planet Money after praising the podcast’s methodology, which he called “the antithesis to that of a dry economics textbook.”

Bungacast — also known as Aufhebunga Bunga — is a cult podcast that pays a nod (and a sneer) to Francis Fukuyama by calling itself “the global politics podcast from the end of the end of history.” Informed by Marxist economic theory, this is a left-wing podcast that isn’t shy about criticizing the absurdity and hypocrisy of modern politics. But first: a quick German lesson. Aufheben, or Aufhebung, is a German word with a few rather contradictory meanings, including “to lift up,” “abolish,” “preserve,” and “transcend.” With this in mind, you can appreciate the irony of marrying this revolutionary phrase with “bunga bunga,” notoriously the euphemism used to describe former Italian Prime Minister Silvio Berlusconi’s prostitution trial. Smart, satirical, and smug, the show does an excellent job diagnosing the problems of neoliberalism alongside the lack of tangible left-wing opposition. But don’t be intimidated by the Marxist vocabulary. If you can remember “derivatives,” you can learn “dialectical materialism.”

If you’re a fan of Pod Save America, this next show is for you. Pitchfork Economics not only echoes the tone and format of the popular political podcast, but also mirrors its thinking. The show is simple and effective, without gloss or sound effects. It favors roundtable discussion, headed by venture capitalist Nick Hanauer, who warns that too much economic disparity can lead to violence, instability, and even totalitarianism.

Hanauer is a solutions-based thinker. You can tell as much from his episode titles, like “We can redefine worker power” and “How to repair the housing crisis.” And although he doesn’t have answers for every question of our time, Hanauer and his guests make for compelling listening at the intersection of economics and politics.

Economics is about more than money, as every glib behavioral economics student will tell you. Even banal things, from the position of wastepaper baskets to the supply chain behind your morning coffee, are entangled with economic concerns. But rather than feel baffled by this wide scope, tune into Freakonomics Radio, a weekly podcast all about the “hidden side” of, well, everything. Packed with interviews and an inclusive approach, Freakonomics has a pleasingly old-school format. If you’ve heard of “cozy crime,” this is “cozy economics,” complete with an affable and informed host. Steven J. Dubner is the author of many smart-thinking books — including, of course, 2005’s Freakonomics — making him the perfect guide for easy-to-digest economics content.

Since moving from Vox to The New York Times, journalist Ezra Klein has pushed his award-winning podcast to new heights, featuring some of the most thought-provoking conversations of the moment. While the show covers more than economics, the extent to which Klein and his team research every topic is evident in the way they push complex debates in new directions. Klein is a thoughtful interviewer who approaches every guest with a blend of curiosity, empathy, and healthy skepticism. He’s so good, in fact, that we named his show one of the ten best podcasts of 2021. Tune in twice a week for discussions on modern workplace trends, climate change, and other important topics concerning how we live today.

Like any money-minded investor, The Economist has a diverse portfolio of podcasts encompassing everything current in mainstream economics, including topics like financial markets and geopolitics. The Economist Asks is one of the publication’s more accessible offerings. Hosted by Anne McElvoy, this chat show invites high-profile journalists and professionals to tackle a pressing question. Episodes are only around 20 minutes, but their analysis is rarely lacking. The show sets the blueprint for what other topical economics podcasts should seek to emulate.

Love it or hate it, people have a lot to say about capitalism. It’s hard to think of anything more ubiquitous yet controversial. Capitalisn’t is a podcast dedicated to asking the hard questions about where capitalism has got us and where it’s going, hosted by Vanity Fair contributing editor Bethany McLean and economics professor Luigi Zingales.

Capitalisn’t boasts an impressive roster of guests, including Thomas Piketty, Elon Musk, and Yanis Varoufakis. As with many popular podcasts, the show has evolved from a discussion between co-hosts into a “who’s who” of celebrity economists. And yet, Capitalisn’t remains a great example of how to ask difficult questions and provoke discourse among your audience members, even if they don’t always love your guests.

From The Wall Street Journal comes, you guessed it, The Journal, a daily podcast that delivers 20-minute minisodes on topics that could almost be accused of clickbait. “Is Disney too woke? Who is the Twitter whistleblower? Have you heard the one about the crypto pig butchering scam?” The Journal synthesizes the news of the day with accessible economics analysis, making it a great entry point for financial newcomers. Hosted by Kate Linebaugh and Ryan Knutson, the podcast is co-produced by Gimlet Media and The Wall Street Journal and claims to be about the “most important stories” in business. But for all its bombastic titles, The Journal proves itself to be well-produced and rather addictive.

Upstream is a multi-faceted podcast that manages to put out bi-weekly conversations and quarterly documentaries without ever getting muddled. The show’s premise is simple: it invites you to unlearn everything you thought you knew about economics. This translates to a committed dismantling of neoliberalism through the intersection of class, race, and history — a methodology supported by bi-weekly discussions with thinkers and speakers from the left.

Despite the economic woes we we’ve suffered in this century, Upstream is a show grounded in optimism. It makes this list because it successfully treads the line between storytelling and analysis, and on an ambitious scale.