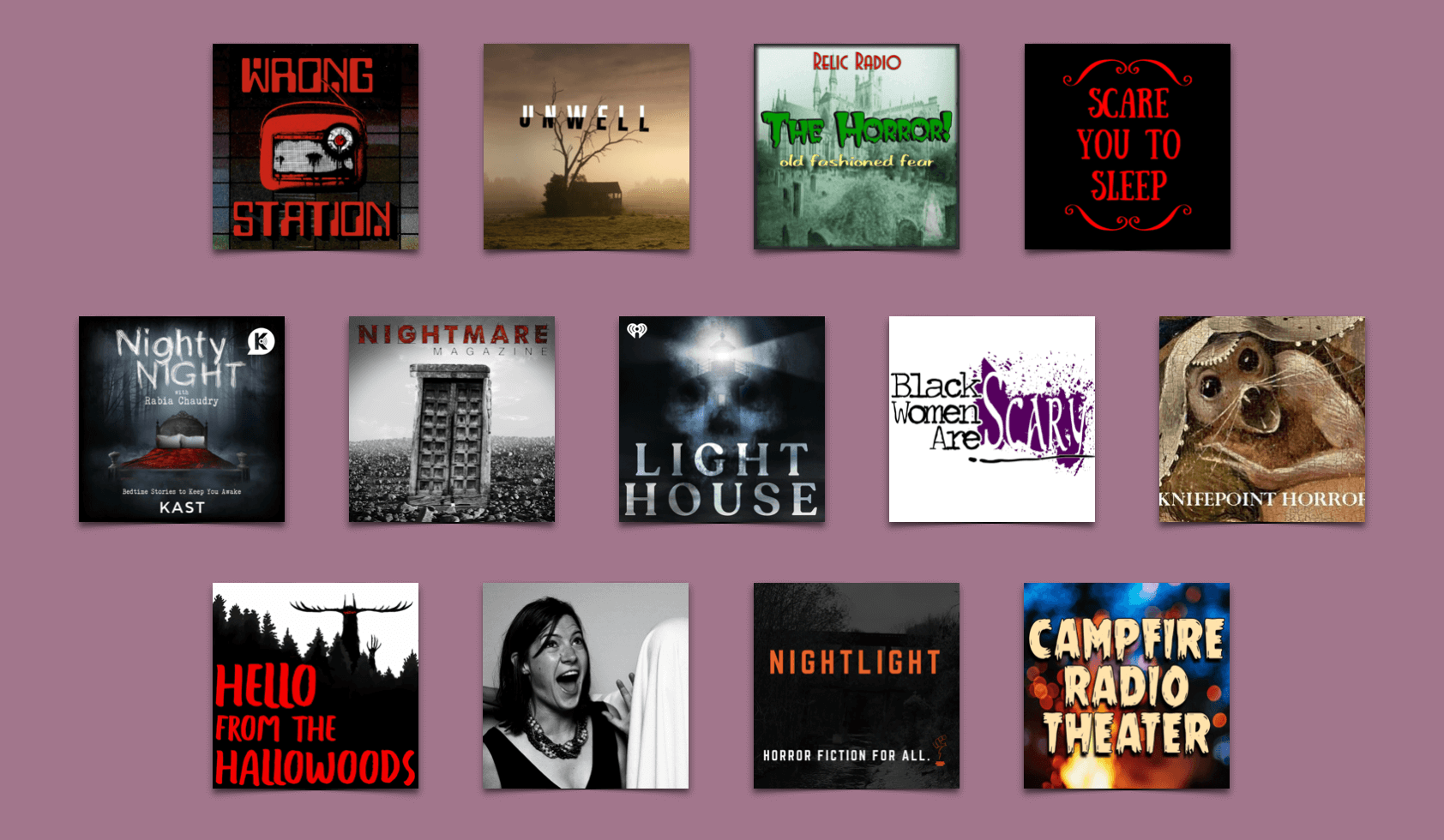 Horror has long been one of podcasting’s most popular genres. Indeed, it’s hard to imagine the podcast landscape without such classics as No Sleep, Pseudopod, Tales to Terrify, Welcome to Night Vale, Alice Isn’t Dead, and so many others. Yet even with so many well-known narrative horror and horror-adjacent podcasts in the world, there are still some excellent shows that fly under the radar. Here are some of the best lesser-known horror podcasts to keep you awake at night.

Though this podcast is now five seasons in, it just doesn’t get the credit it deserves. The series is curated by writer Tonia Ransom, who intended Nightlight to highlight Black authors telling Black stories, and in doing so the show is releasing some of the very best horror stories out there. Some tales veer into romance, some into sci-fi, and some are more standard horror fare, but each story is haunting and unforgettable. Genre faves like reluctant werewolves and murderous mermaids embrace tropes while turning them on their head to give us something new. Each episode runs about half an hour, making it a great lunchtime listen.

Though Campfire Radio Theater only debuts new episodes a few times a year, they’re always well worth the wait. The show boasts incredible audio engineering and is meticulously edited to make the audience feel like they’re right in the room while all these terrifying things are happening. Standard horror tropes like zombies and stalkers are given horrifying new life in these modern radio plays. For those who gravitate towards horror that quickens your pulse and gives plenty of jump scares, CRT is among the best in the game.

Black Women Are Scary kicks off with a statement of purpose, explaining that the series does not reinvent the wheel so much as it shines a light on the Black women horror writers that have always existed but have been by and far overlooked by mainstream horror media. Its output ranges from the psychological to no-holds-barred body horror. Throughout, the series shows a specific interest in creating a space for jaw-dropping but deeply felt pieces that tap into themes of existential horror. More than most any other narrative podcast anthology series, this one will have you lost in thought after its credits roll, lingering on imagery and scenes from its brilliantly selected output.

Scare You To Sleep

Host Shelby Scott initially started Scare You To Sleep as a vehicle to host her own horror stories, but soon expanded to including stories from many different authors. The podcast has a distinctive voice in that it generally tells character studies, but the show also has no issue dropping you right into a slasher story full of disembowelment and gore. Surprisingly brutal for its low-key tone, SYTS is one of the more entertaining horror shows since you really never know what you’re going to get from any one episode.

Knifepoint Horror has been around for a long time and is frequently featured on other horror podcast lists, but its insistently understated approach to horror is really something to admire. Often these tales are more like character studies than anything else, so by the time you make it to “the scary part,” it’s all the more effective as it comes as a complete surprise. For instance, the episode “Twelve Tiny Cabins” starts as a tale about recovering from hidden trauma, and only halfway through the episode do you realize that it also happens to be about terrifying killer dolls. That all the episodes are written by Soren Narnia gives the series a constant creative vision. Among horror podcasts, KPH is one of the most consistently unsettling.

Many narrative podcasts of today are inspired by classic horror radio programs like Lights Out and Suspense. Indeed, one of No Sleep Podcast’s recurring bonus series works as an ode to these shows while Campfire Radio often modernizes these iconic stories for retellings of their own. The Horror! is a series that tracks down and re-releases not just influential radio masterpieces like Suspense’s “The House in Cypress Canyon” and Quiet, Please’s “The Thing On The Fourble Board,” but also tracks down some fascinating forgotten hits from shows like The Hermit’s Cave and The Weird Circle that listeners might not otherwise get the chance to hear. This is part of the larger Relic Radio network, which collects and celebrates often forgotten thriller, sci-fi, and mystery radio plays.

As many fans of horror will know, Nightmare is among the best and most well-known modern anthologies. Currently close to clearing its one-hundredth issue, this series has been going since all the way back to 2012, and has featured stories from some of speculative fiction’s biggest names. You can read many of their back issues for free online, and in many cases still purchase hard copies. That Nightmare is an institution is indisputable, so it’s lucky for us that they’ve brought some of their very best stories to the realm of audio horror. Their archive is full of modern classics, so treat yourself and give them a listen.

Written and directed by Jeff Heimbuch, Light House is a single-story horror podcast that takes listeners through Tara Hollis’s troubled childhood and her attempts to flee familial abuse caused by the evil entities that inhabited the property long before her family moved there. The combination of old tapes and first-person narrative make for a chilling tale, and the show is one of iHeartRadio’s strongest fiction offerings to date.

Attorney and author Rabia Chaudry is likely best known as an influential voice in the true crime sphere, having been a major player in the first season of Serial back in 2014 and thus hooking countless listeners on the podcast medium. Nighty Night combines Chaudry’s knowledge of true crime paired with her fandom around the horror genre to release stories that often mix the two, inspired either by real life cases of days gone by or by classic literature like Oscar Wilde’s The Portrait of Dorian Gray or Shirley Jackson’s The Lottery. Creating tales that are both unique and familiar, this is an offbeat listen that also airs interviews with various true crime podcasters about cases that influenced Nighty Night’s repertoire.

If you’re a fan of the classic radio-style format of horror podcasts, this series is for you. Not only does Wrong Station feature audio engineering that makes you feel like you’re present alongside the story as it unfolds, it has several episodes that go in wildly different directions and as such guarantees something for every horror fan. Taking direct inspiration from beloved old series like Suspense and Lights Out (which has been remastered and re-released via The Horror! podcast) but with a mix of the Twilight Zone and even some ‘80s camp horror thrown in for good measure, this is a podcast that manages to feel new and old both at the same time.

This is another single-story podcast in the vein of Light House, Alice Isn’t Dead, or The Black Tapes. The story follows Lillian Harper, who returns to her Midwestern hometown to care for her ailing mother. Unfortunately, while it turns out you can go home again, you really shouldn’t, and Lillian discovers the thinly veiled mysteries and horrors from her youth given terrifying new context in her adulthood. For people that love a well-paced dive through the darkest corners of childhood, Unwell will grab you in its first few minutes. A perfect binge listen.

Headed up by gay and nonbinary author William A. Wellman, this horror podcast not only taps into the many already existing queer themes of the genre, but it tends to add a healthy dose of the absolutely weird to the mix to create something wholly original. Featuring cryptic intros from its narrator, the level of surrealism at play in each episode is a major part of the draw of the series. Leaning into the dreamy and unreal side of horror, Hallowoods thrives when it’s getting to the root of deeply buried issues of identity and acceptance. Often surprisingly kind at its heart, Hallowoods can be a surprisingly wholesome (if still terrifying) listen.

Ghosts in the Burbs

Based in Wellesley, Massachusetts, Ghosts in the Burbs focuses on stories told to schoolteacher Liz Sower by residents of this relatively inconspicuous suburban town. Some of these tales are funny, some of them are chilling, but they’re all ostensibly true…or at least true in the urban legend sense where enough people believe them that they’ve become part of our common lexicon. Out of all the podcasts on this list, Ghosts in the Burbs is perhaps the most endearing due to Liz’s genuine interest in her friends and neighbors, but that isn’t to sell short its scariness — the show’s tales of hauntings and mysterious figures in the night are sure to get your pulse pumping.

Sara is a writer of short stories, articles about comics and film, and many, many zines. She is an artist, comic creator, filmmaker, and podcaster. Find her work at www.saracentury.com