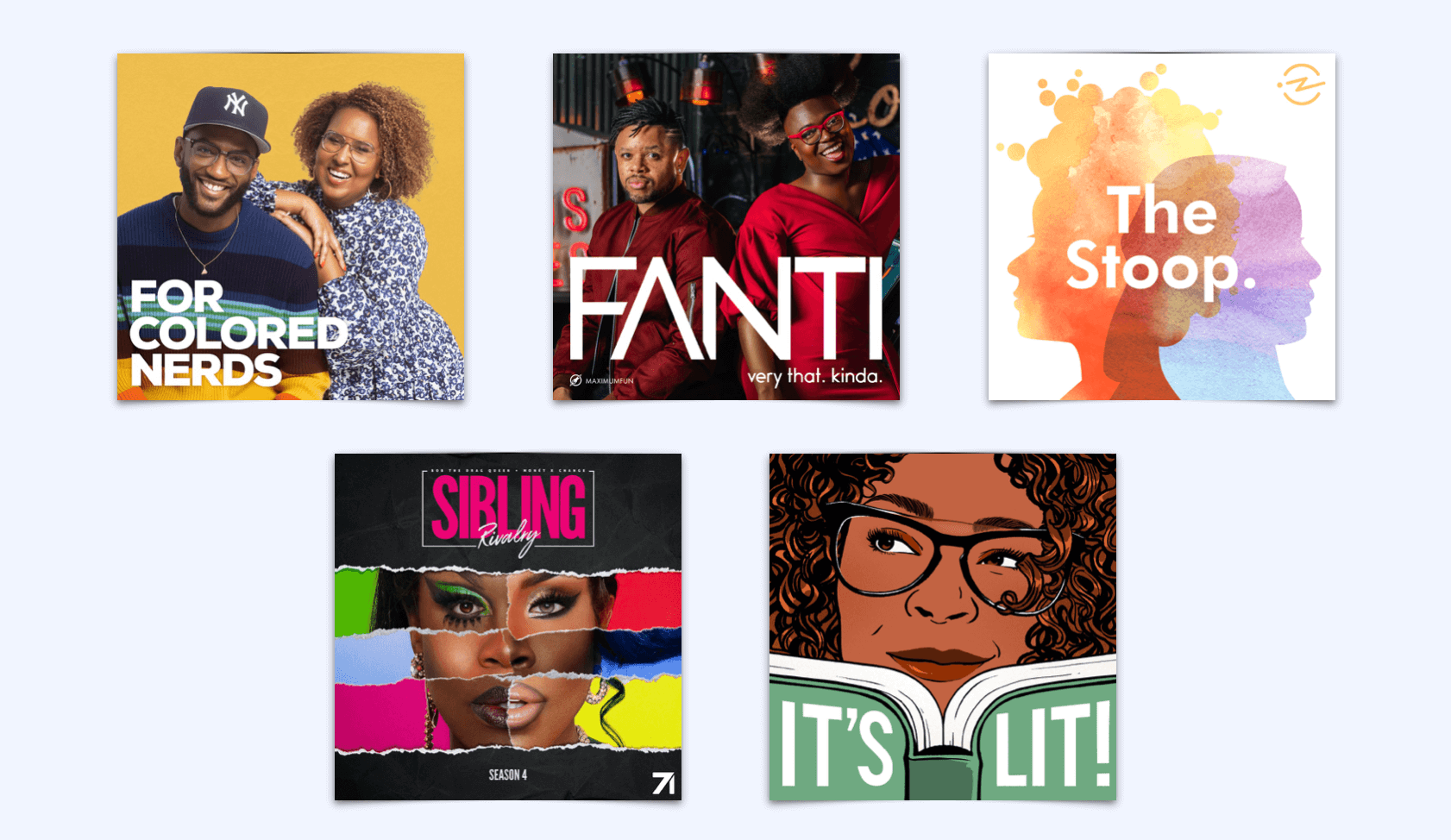 Since Summer 2020’s “racial reckoning,” article after article has recommended podcasts for white people to learn about Black people in order to help the country move forward on issues of race. There haven’t been nearly as many podcast recommendations for Black people to revel in being Black. No shade to those very necessary podcasts covering race and racism, but we could use a little levity in the midst of ceaseless police violence and a deadly pandemic that’s disproportionately affecting us.

Here are five podcasts for Black listeners who want to hear their own stories and laugh along with charismatic co-hosts who talk to us like we’re family. Each shares some DNA with The Read, hosted by Crissle and Kid Fury and still going strong today, and Another Round, which was hosted by Tracy Clayton and Heben Nigatu and ended unceremoniously in 2017. Neither podcast over-explained or code-switched for white people. If you’re looking for more podcasts in this vein, check out these shows covering Black culture, entertainment, experiences, and—most importantly—joy.

Staple Black news and culture site The Root recently ventured into the podcast arena with It’s Lit!, which centers Black literature. Each week, host Maiysha Kai talks with Black writers about their latest works. Guests so far have included literary juggernauts Nikole Hannah Jones, Stacey Abrams, and Ibram X. Kendi, and also less honored but much deserving faves like romance writer Tia Williams, actor-turned-author Karyn Parsons of The Fresh Prince of Bel Air, and cultural critic Hanif Abdurraqib. There is something for everyone in this podcast. Maiysha talks to authors in a variety of genres including YA, romance, memoir, politics, history, and fiction. Best of all, these talented writers get to talk about their craft and experiences in the publishing industry, topics they seldom get asked to discuss.

FANTI shares much with The Read. Both shows are hosted by two hilarious queer Black people—in the case of FANTI, journalists Tre’vell Anderson and Jarrett Hill. FANTI also features similar segments about current events, Black accomplishments, and live readings of listener letters. Where the shows diverge—and where FANTI shines—is its main segment, weighing the pros (or the “Fan” side) and cons (or the “Anti” side) of some aspect of Black culture. They add insightful discussion to debates happening elsewhere, from the antics of Dave Chappelle and Nicki Minaj to use of the N word, but also dissect issues rarely discussed, such as queerbaiting, trailblazer fatigue, and the importance of mediocre Black art. Tre’vell and Jarrett have these conversations without code-switching for non-Black people—or straight people, for that matter. It is a delight to hear two very accomplished journalists speak like they’re at home with family instead of at work.

The Stoop’s tag-line, “Stories from Across the Black Diaspora,” highlights the podcast’s best feature—stories about Black people beyond those in the U.S. I became hooked on The Stoop’s first episode in 2017 when hosts Hana Baba, who is Sudanese-American, and Leila Day, who was born in the U.S., discussed the thorny issue of whether U.S.-born Black people could be appropriators of African culture when they dress in African prints, headwraps, and dashikis. Cultural appropriation was and is a hot topic, but hadn’t been examined within the Black diaspora community. It was particularly relevant episode for me back when I, a Black Caribbean, was contemplating wearing African attire to a Nigerian wedding.

Hana and Leila “stoop it out” over other Black diaspora topics including praise and critique of the Coming to America movies and Beyoncé’s Black is King, colorism “from Compton to Sudan,” and leaving one’s home country to be a BlaxPat, or Black ex-patriot. There’s also plenty of episodes dedicated to issues that affect Black people around the globe, including Black hair, Black butts, and the Black tax.

Despite what the title suggests, For Colored Nerds is for all types of Black people. FCN ended in 2017 when hosts Brittany Luse and Eric Eddings left to create a new podcast, The Nod, on Gimlet Media. After a fallout with Gimlet and parent company Spotify that shed light on the lack of ownership and IP rights podcasters have over their own content, Brittany and Eric are bringing back FCN, and we are ecstatic.

FCN excelled at illuminating underappreciated Black art. The podcast made the case for Boomerang as a Top 5 Black film and Donnie Hathaway’s rightful place in the G.O.A.T. conversation. The hosts didn’t just gab about the entertainment they love; instead they examined how certain films, TV shows, and musicians became touchstones in our community. I hope some beloved segments from The Nod return to FCN, including “Six Degrees of Black Separation,” “Good for the Blacks”—where Brittany and Eric debate whether topics like the Shade Room and Drake are good or bad for Black people, and “Vindication Court”—where much maligned parts of Black culture, like snap music and T-Pain, are given a chance at redemption.

Listeners might expect Sibling Rivalry, hosted by RuPaul’s Drag Race winners Bob the Drag Queen and Monét X Change, to be about Drag Race or life as a drag queen. However, this podcast is so much more. Play-siblings Bob and Monét talk, and do their fair share of arguing, about every aspect of being Black, queer, entertainers, and human. Don’t worry: they also throw in tidbits about their time on Drag Race and other queens show up as guests.

Sibling Rivalry doesn’t filter for anyone—it is 100% for the fans. Case in point: Bob and Monét are famous enough now to keep their personal lives private. But they give back to the fans who made them famous with frank discussions of subjects usually off-topic for celebrities, such as drugs, sex, and porn. And as fun as it is to laugh and gossip with the queens, it’s just as easy to cry with them when they delve into some of the traumas Black people share. It’s cathartic to hear the queens talk about their upbringing—Bob by a single mother in the South and Monét by an extended West Indian family in Brooklyn. Bob’s tearful memory of having to loan their mother money as a child rang so true to me that I was also bought to tears. I know many, many listeners can relate.

Ofelia Brooks, a Black, first-generation writer and lawyer, has work appearing in Catapult, Cutleaf, and Drunk Monkeys, among others. She can be found on Twitter and Instagram @ofeliabrooksesq and at ofeliabrooksesq.com.