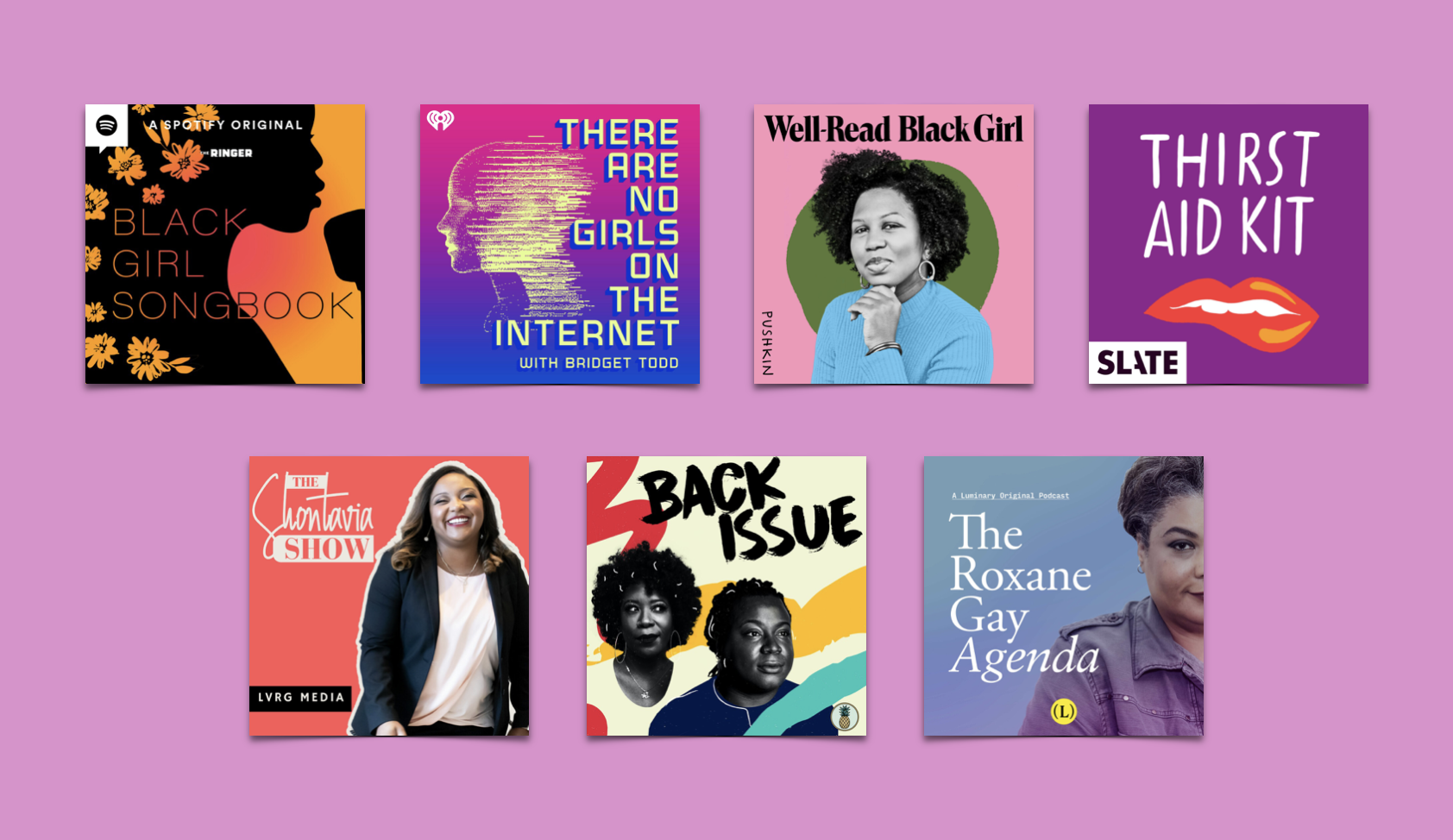 It’s no secret that Black women are driving the culture — look no further than the latest non-Black celebrity in trouble for appropriating Black women’s speech, music, or aesthetics. And yet, Malcolm X’s words in 1962 still resonate today: “The most neglected person in America is the black woman.” Black women are few and far between on the New York Times Best Sellers list and at the Oscars winners’ table but are overrepresented in joblessness, housing insecurity, and health disparities.

Fortunately, Black women podcasters are leading the charge in fixing this upsetting incongruence. Their podcasts not only offer reflections and insight into issues affecting Black women, but also make space for Black women’s joy. Check out these seven empowering and effervescent podcasts made by Black women. We should all be listening.

Spotify’s Black Girl Songbook is a singular treasure in music podcasting, a space dominated by male hosts interviewing primarily male artists, songwriters, and producers. The podcast, Black women-led and focused, succeeds in its mission to give Black women the credit they are due. Each episode is part history lesson on the contribution Black women have made go music, part confessional with glimpses into host Danyel Smith’s glamorous life as the first woman and Black editor-in-chief of Vibe and Billboard, and part jam session featuring a carefully curated duo or trio of songs played in their entirety.

I would highlight stand-out episodes, but to borrow from music parlance, there are no skips here. Listen to every episode — you’ll always learn something new, like the marvelous work of underappreciated legends Angela Bofill, Deniece Williams, and Karyn White, or something you didn’t know before about icons like Mariah, Rihanna, Aretha, and Whitney.

There Are No Girls on the Internet

Once upon a time, the internet wasn’t toxic. In the late 90s and early 2000s, the web was a bourgeoning space for marginalized creatives to make innovative content. It’s easy to forget those times and the many Black women who shaped them. Fortunately, Bridget Todd’s excellent podcast from iHeart Media, There Are No Girls On the Internet, is here to remind us. Todd amplifies the role of Black women in the digital realm by centering their experiences online. She interviews the women present at the internet’s beginnings, like Kimberly Foster discussing the start of YouTube, Shafiqah Hudson calling out trolls pretending to be Black women on Twitter, and Ashley Reese recounting the glory days of Tumblr. She also talks to the women currently trying to use the internet for good, like political pundit Danielle Moodie, archivist Sydette Harry, and writer Keah Brown.

To temper the sharp critiques of the internet’s abysmal state, there are also celebratory episodes, like ones paying homage to digital innovator Missy Elliott and saluting Kehlani’s takedown of an internet troll. TANGOTI shines in all respects, but I especially appreciate how the podcast asks its guests and listeners to imagine the internet’s future. After all, the internet isn’t going anywhere; it’s up to us to make it the revolutionary space it was created to be.

For the benefit of us all, Glory Edim has made her immensely popular Well-Read Black Girl book club and literary festival into a podcast with Pushkin Industries. In each episode, she talks craft with established and emerging Black women writers like Tayari Jones, Stacey Abrams, Nikole Hannah-Jones, Zeba Blay, Deesha Philyaw, and Jacqueline Woodson. We are in good hands with Glory’s warm, open interview style, making us feel like she and her esteemed guests are right next to us at the book club brunch. Bonus episodes are for talking shop about the publishing industry, from finding a book agent to overcoming writer’s block and putting together a book proposal. No matter the subject, each conversation is an in-depth and intimate celebration of Black women writers and the Black girl readers, like Glory, who love them.

In 2020, it seemed like every person in the world wanted to quit their lousy day job and pursue their passion. Shontavia Johnson not only did that — leaving corporate law to start her own business — but she now helps others make the same leap through her informative podcast, The Shontavia Show. In each episode, Shontavia guides Black women through the scary process of following their dreams. Some episodes are explainers like Copyright 101 and why you need a tax ID number, while others offer tips on how to find extra time to start your business and, better yet, how to build your brand for your new job while working at your old one. There are also interviews with other successful Black entrepreneurs providing plenty of motivation.

I want to consume everything Roxane Gay creates. I’ve devoured every book, essay, interview, and master class. I don’t even bother waiting for Roxane’s tweets to show up in my timeline — I go straight to her page to sit back and enjoy the show. For those like me who want even more Roxane, check out her fantastic podcast, The Roxane Gay Agenda.

Roxane brings all the humor, intelligence, and insight from her writing to this podcast while interviewing her favorite authors, celebrities, and thinkers. There isn’t a single conversation that doesn’t leave me with a deeper understanding of one of today’s pressing issues. And, for obsessives like me who won’t ever get to be Roxane’s BFF in real life, The Roxane Gay Agenda provides a satisfying glimpse into the host’s personal life. For example, in two episodes with actor and comedian Nicole Byer and filmmaker Numa Perrier, I learned Roxane dabbled as a phone sex operator, started writing in her late thirties, and doesn’t think you should ever underestimate a Haitian woman. I’m ready for The Roxane Gay Agenda TV show. Think about it, Roxane!

Tracy Clayton’s Twitter bio says she’s the Beyoncé of mood disorders, but as far as I’m concerned, she’s the Beyoncé of podcasts. Since ending the beloved Another Round podcast in 2017, Tracy has produced several podcasts, including Back Issue with Josh Gwynn, My 90s Playlist with Akoto Ofori-Atta, Strong Black Legends, and Going Through It. Tracy’s catalog is excellent, but Back Issue from Pineapple Street Studios is her Lemonade. That makes Josh, a producer and first-time co-host, Tracy’s The-Dream.

The creative duo’s retrospective analysis of pop culture’s most significant moments is a treat from start to finish. From episodes on Living Single, America’s Next Top Model, and In Living Color to ones about girl groups, blue-eyed soul, and Freaknik, Tracy and Josh interrogate how and why these moments changed our lives. Each episode’s structure is loose, featuring games testing which moments have stuck with us, interviews with experts who lived through the times, and a hilarious closing segment, “Learn Something from This,” with lessons from revisiting the past. Josh and Tracy’s deep friendship radiates through each episode, making each breezy conversation feel like your best friends walking with you down memory lane.

It was a sad day in 2020 when Thirst Aid Kit hosts Bim Adewummi and Nichole Perkins hung up their mics. The refreshing podcast from Slate focused on desire and enabled women, usually treated as objects, to do the objectifying. Thirst Aid Kit gifted us four impressive seasons of cultural analysis examining why we desire who we desire. In addition, we were blessed with stunning prose in the form of fan fic drabbles by the hosts. In later seasons as the show gained prominence and a loyal fanbase (Thirstbucks, where y’all at?!), Bim and Nichole interviewed lust royalty like Chris Evans, Jake Johnson, and Blair Underwood.

Alas, all things must end, and Nichole and Bim closed up shop for other podcast gigs. (Nichole hosts This is Good For You, while Bim is a producer on This American Life). Thankfully, they left us with a superb back catalog. My favorite episode is the first, which focused on the appeal of Andre 3000 and other Southern charmers like him. The show started at such a high level that it’s no surprise that when it ended, it was in the stratosphere.

Ofelia Brooks, a Black, first-generation writer and lawyer, has work appearing in Catapult, Cutleaf, and Drunk Monkeys, among other publications. She can be found on Twitter and Instagram @ofeliabrooksesq and at ofeliabrooksesq.com.