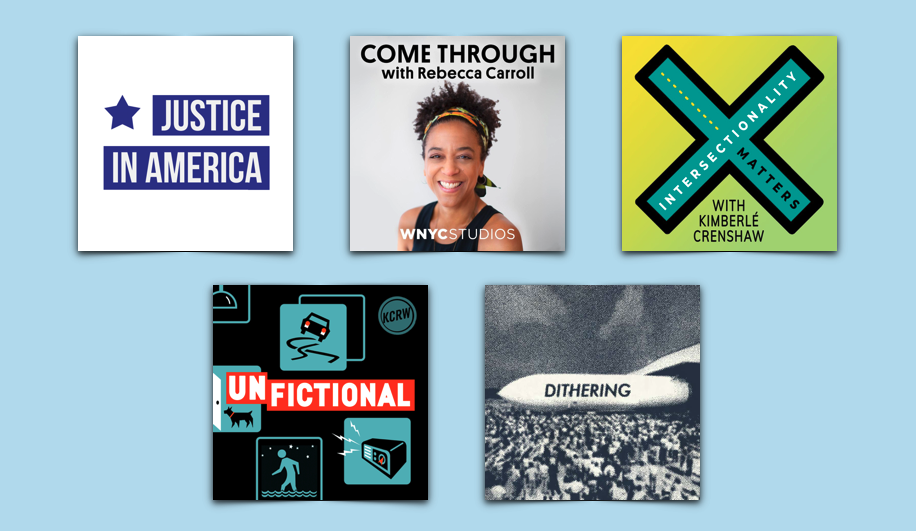 The Appeal’s podcast covering US criminal justice’s history and present finished its third season in April. This season, Josie Duffy Rice and several frequent collaborators covered a number of current horrors — police abuse, the death penalty, private prisons — before embarking on a four-episode series about education and incarceration. These four episodes take a necessarily-holistic approach to the topic, investigating both the school-to-prison pipeline as well as the incredible difficulties of pursuing a college degree while incarcerated. Justice in America is remarkable for its history and its curiosity, consistently reaching beyond reformist solutions to mass incarceration. The Season 2 episode featuring Mariame Kaba on prison abolition is an excellent listen, and a reminder that the rejecting of the current order and imagining of a new one is work done everyday.

On Dithering, the tech analysts Ben Thompson (Stratechery) and John Gruber (Daring Fireball) meet three times a week to discuss the news of the day. There are no shortage of podcasts that are both tech-focused and talk-heavy, but the show is an exciting, even addictive, listen for two reasons. First, the podcast has made it a rule that each episode will run exactly 15 minutes. It’s a simple guideline, and yet one that would certainly improve the quality of many other chat-casts. For Thompson and Gruber, this time limit seems to sharpen their conversations, consistently lending the show a sense of giddy urgency. The second fact that makes this show worthwhile is that the hosts don’t always agree on the issues they discuss. A recent episode featured the two writers debating whether social media companies should moderate President Trump’s posts. It was a respectful debate, but also one with enough conviction from both sides to inject some hearty vigor into your morning routine.

On Intersectionality Matters!, the law professor and civil rights advocate Kimberlé Crenshaw brings together activists, artists, and academics to discuss political history and current social movements. Crenshaw — who is best known for developing the theory of intersectionality — has hosted the show since February of last year, but the podcast has recently been highlighted on a number of anti-racist listening lists in light of the police killings of George Floyd and Breonna Taylor. The show is worth starting from the beginning. On its first episode, Crenshaw speaks with Rhanda Dormeus, the mother of Korryn Gaines, who was shot and killed by a Baltimore County police officer after a six-hour standoff stemming from a minor traffic violation. Dormeus reveals the harrowing truth about the events that led to her daughter’s unlawful murder, and speaks about becoming a leading voice of the Say Her Name movement. Later episodes cover this movement in greater detail, as well as the origins of #MeToo and the true legacy of the Stonewall Uprising. Now, since the start of April, the show has been releasing weekly episodes as part of a series called Under the Blacklight, focused on uncovering “the intersectional vulnerabilities that COVID lays bare.” A recent episode on how the pandemic is affecting those in prison is a particularly enlightening listen.

UnFictional began almost a decade ago as a radio show, so it seems fitting that the final episode of its latest season celebrates rock ’n roll radio from an insider’s perspective. Bob Carlson, the show’s host and producer, has worked in radio since he was a teenager. On “The Man Inside The Radio,” Carlson reminisces about what it was like growing up in the 1970s with rock radio as the soundtrack of his adolescence. UnFictional delves into stories that originate from the thoughts and lives of people “far away,” a near-uncategorizable medley of memories and semi-fictional narratives that are crafted to create an absorbing listening experience. The theme of this last season is ‘Stories of Fantasy,’ and its seven episodes include a musical memoir, the story of a woman escaping domestic slavery, and a two-part series about a Mexican television star abandoned in the desert. If you’re looking for a podcast with a deep and rewarding archive, consider UnFictional’s fantastically real storytelling.

Come Through with Rebecca Carroll

When Rebecca Carroll started planning her new podcast, Come Through, she could not have known it would be so timely. In the show’s introduction, which was released on the long-ago date of April 2nd, Carroll explained that the podcast would present “15 essential conversations about race in a pivotal year for America.” In referencing the current moment she meant, of course, this year’s presidential election. This has been a pivotal year for America, but not for that reason. The novel coronavirus and the movement for racial justice born from the police killing of George Floyd have both radically changed the country. Despite this unforeseen present, Carroll’s interviews are more relevant than ever. As she says, “Everything is about race.” And her interviews with public health experts, educators, activists and well-known Black voices are indeed essential in this moment of confronting racism in our society.