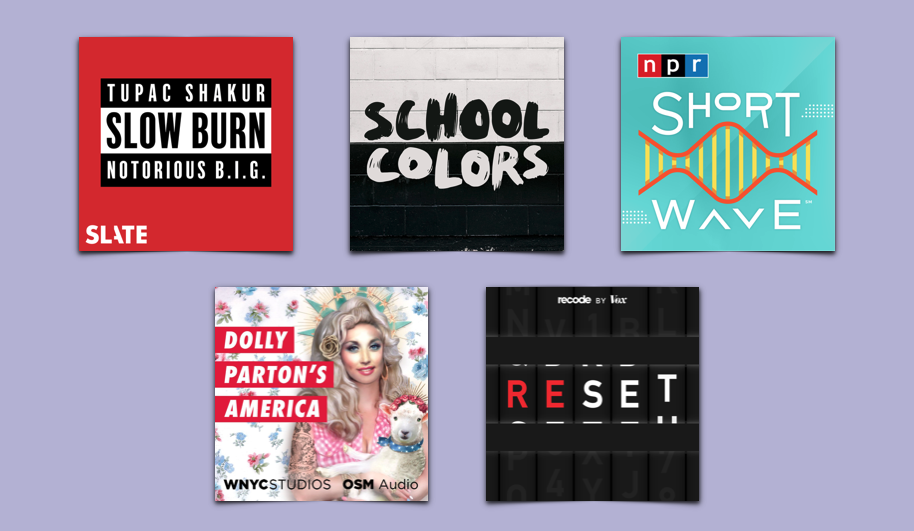 Slow Burn’s third season is a whole new world for the critically-acclaimed podcast. Following Leon Neyfakh’s defection to Luminary, Joel Anderson has taken over to investigate not an impeachment scandal but the lives and murders of Tupac Shakur and Biggie Smalls. The show has lost nothing of its breadth. Its first episode, which premiered last week, suggests that this season aims not just to untangle or solve the murders, but to provide the definitive profiles of Tupac and Biggie. Anderson, who’s done excellent work for Slate and Buzzfeed throughout the last decade, seems committed to expanding the Slow Burn universe of possible stories without sacrificing its reputation for exhaustive research.

Few celebrities can command an entire podcast about their life, but in Dolly Parton’s America, Parton proves to contain an unexpected depth of personality and history. Whether you’ve never listened to her music or you’re a longtime fan, the show, hosted by Radiolab’s Jad Abumrad, is a careful study of the complex life of an easy-to-overlook country music superstar. The show’s entry point into Parton’s world is through her comically larger than life persona, but it quickly narrows into a series of rabbit holes to reveal deeper truths about not only country music and the perils of the entertainment industry, but immigration, liberalism, and our ongoing quest as Americans to learn who we really are. Abumrad also does a fascinating job of weaving his own personal history into Parton’s life, showing how her music has more to offer us than we might think. If you only make one exception for country music in your life, make it this.

Reset, a new thrice-weekly podcast from Vox’s Recode, sets out to “explore why – and how – tech is changing everything.” Hosted by former Vice News Tonight correspondent Arielle Duhaime-Ross, the show has so far covered the dangers of facial recognition technology, the gene editing tool CRISPR, and Twitter’s recently announced ban on political advertising. The show is at its best when it moves beyond the news cycle, such as with a recent episode on AI essay grading. Duhaime-Ross talks to a frustrated parent who finds that the algorithm grading his son’s assignments seems to only give him a good score when he reaches a certain word count and uses obscure vocabulary. To anyone who went through school even five years ago, the idea of non-human grading sounds positively dystopian. We look forward to what else Reset uncovers about our society’s current uses of technology.

School Colors, a new podcast from Brooklyn Deep, seeks to answer a complex question: Why is school enrollment going down in Bedford-Stuyvesant? The neighborhood is a historic center of black culture in Brooklyn that, for a variety of reasons, has seen its proportion of black residents decrease and school enrollment plummet in recent years.

Narrated by Mark Winston Griffith, an activist and Brooklyn native, and Max Freedman, a teacher, audio producer and relative newcomer to the neighborhood, the podcast’s first episode explores the area’s educational history. Starting as far back as “Colored School No. 2,” a school set up in Weeksville, the free-black settlement that was established when New York City was still called New Amsterdam, the episode details the continual struggle of black residents for equal opportunity in their schools, and then ends with a great interview with Dr. Adelaide Sanford, a retired teacher and principal in the neighborhood, setting up the next episode to explore New York City’s school desegregation efforts during the 1960s. The podcast hits at the nexus between black history in New York and contemporary concerns around gentrification, education policy and finding equitable spaces for students of color in modern schools.

Short Wave is to science as The Indicator is to economics. The latest 10-minute podcast from NPR, described as a “brain snack” by host Maddie Sofia, offers both science news and lighthearted explainers, allowing the show to cover both the Trump administration’s leaving the Paris Accords and the question of why some people are thrill-seekers in the past week. Short Wave is curious and pleasant, and a low-risk entry into the vast world of science journalism. It’s designed to get listeners to think about science on a daily basis, and to acknowledge research and scientific policy as part of the news cycle.