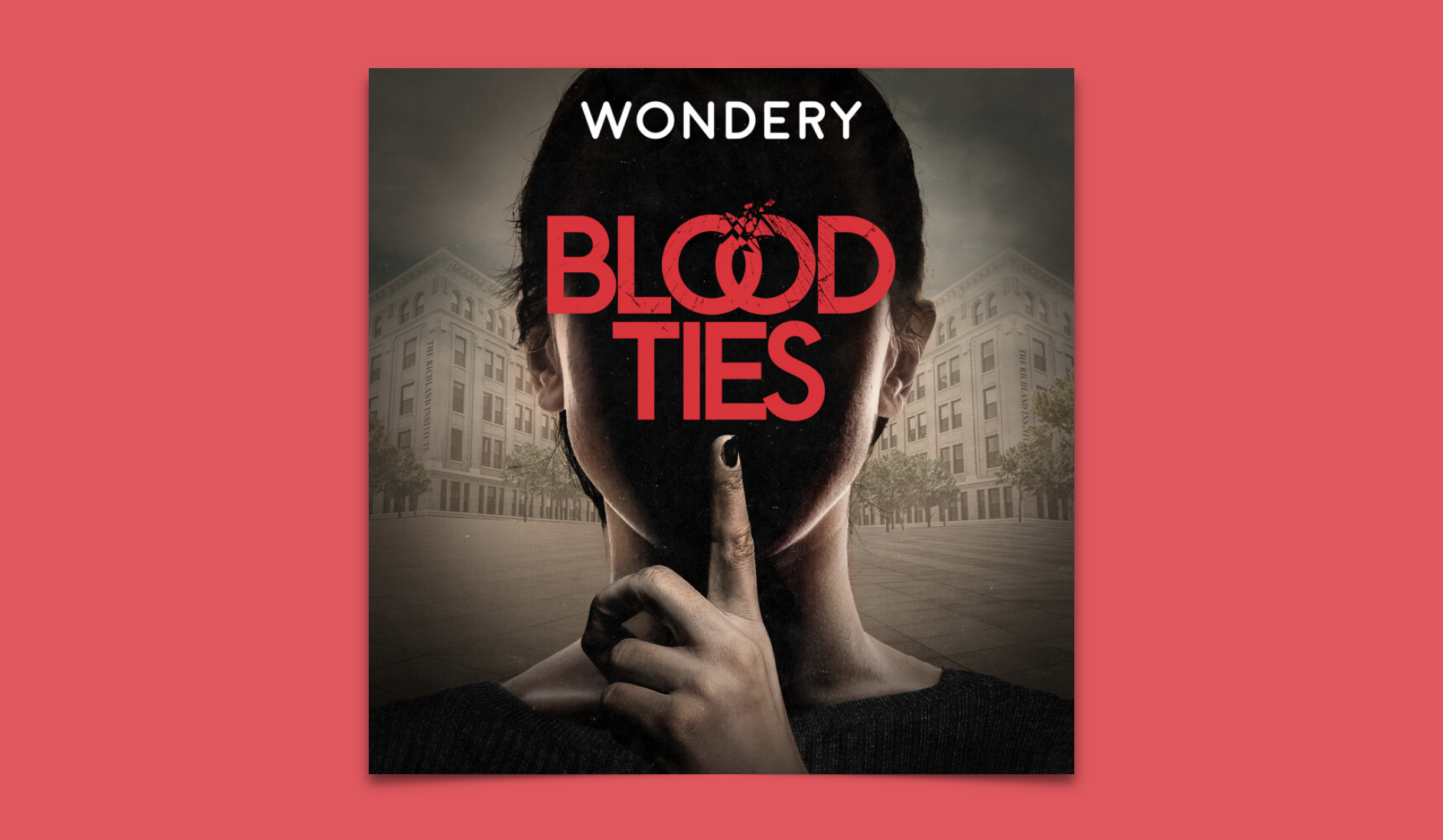 I am slightly adjacent to the target audience for every mystery/thriller podcast that tops the charts. Suckered in by cover art comprised of dark backgrounds and bright, typographically-dramatic titles, I only sometimes remember to check their brief and unilluminating descriptions. They’ve never given me a clue as to whether I’ll be able to make it through without grimacing, but hope springs eternal. I’m usually wrong.

It’s one of the most baffling and unsettling developments in podcasting: faux true crime that makes no effort in its marketing to identify itself as fiction, produced by creators who remain indifferent to the unethical and voyeuristic tactics of the true crime genre.

Blood Ties, the new fiction series from Wondery, is a prime example of this phenomenon, exploiting the voices of survivors for mass-market consumption. The plot goes as follows: Eleanore Richland (voiced by Gillian Jacobs) and her brother Michael (Josh Gad) are on their way to a family vacation when their parents’ two-seater plane crashes. Their father is Dr. Peter Richland, a world-renowned cardiologist and healthcare magnate loved and admired by all — or is he? The presumed deaths of both of their parents, as well as the mysterious phone call Eleanore receives from her mother just before her death, unleashes a flood of secrets and lies about what their father was really like.

If you think you’ve guessed the next three twists in this story, you likely have because Blood Ties is, at best, empty junk food and a cash grab. At worst, however, Blood Ties continues a long trend of using shock tactics and glossy audio to create a story with little care for what goes into it, ignoring the true strengths of podcasting as a medium.

In the pilot’s opening minutes, we are treated to the Richland children arriving on a Caribbean island, where they are greeted by a hotel porter and a children’s choir. After receiving the phone call notifying them of their parents’ fatal crash, Eleanore and Michael meet a police officer and the island’s governor to speak about moving their mother’s body to the mainland.

Nothing and no one on this island are given a proper name. In fact, they didn’t even name the island. And the choir is called “The Island Children’s Choir,” making for some of the laziest world-building I’ve ever heard. It’s then nothing short of grotesque that every Caribbean islander in the series is portrayed as a nameless form of “the help.” These characters’ entire purpose is to help the Richland family, often in extraordinary ways, including bending the law to get the siblings back on the US mainland more quickly, making each and every one of these characters a reductive and effectively racist caricature.

By the end of episode two, it’s clear that the show’s allusions to the #MeToo movement and the treatment of sexual assault survivors are just as poorly thought-out. When it is revealed that Dr. Richland was a serial rapist, Eleanore goes hell-bent after “the truth” about her father, not caring about anyone else’s feelings or wishes on the way there. Given Eleanore’s status as our protagonist, and without any other character providing empathetic alternatives, her every choice is portrayed as the moral one.

Late in the series we meet Nancy Reyes, a former employee of Dr. Richland’s who went on record about his abuse. We are expected to go along with Eleanore as she tracks down Nancy in Mexico, even though Nancy’s son had expressly stated that she no longer wished to speak to anyone involved. It’s then portrayed as helpful and supportive when Eleanore leverages Nancy’s son against her to come back to the States and face down the Richland Health organization. If you have a character who is a survivor of sexual assault, and they make choices because someone else pressures them to do so, that’s not empowerment. “Do it for your son” coming from Eleanore is not empathy; it’s emotional blackmail.

The inroads large companies with Hollywood-star connections have been making into podcasting has rocketed fiction podcasts into production — at least in quantity. But in quality, they have all suffered from being bland and predictable mirrors of work already done in television and movies. In Blood Ties, Eleanore and Michael have been written as archetypes of the Good and the Bad Rich White Person, playing out the story of children in the shadow of their father’s tarnished legacy with Nancy Reyes as window dressing to make Eleanore look like a hero and Michael look like a villain. The #MeToo movement is just a ghost in the background to put into headlines and doesn’t actually make any meaningful appearance in the show.

Audio provides us with an opportunity to tell stories that might be more expensive or less effective otherwise: intricate sci-fi or terrifying horror where the monsters loom in the listener’s imagination, or intimate romance and breathless thrillers where the heartbeat picks up in the moments of silence. I can’t help but wonder what it would have been like had Blood Ties elected to address the audience as Nancy and not Eleanore, and whether it would have still felt like the faux-true crime voyeurism lately rampant in the nonfiction sphere.

There’s a vast difference between honestly engaging with the topic of sexual assault and power and simply abusing movements like #MeToo for shock value. Unfortunately, Blood Ties chooses to do the latter. This isn’t to say that people like Michael, Eleanore, or Nancy don’t exist, but rather that too many like Michael and Eleanore are in the limelight instead of Nancy. Why are we giving them the microphone and the stage again, instead of the people who were silenced in the first place?

Elena Fernández Collins (@ShoMarq) is a podcast critic and linguist. You can find more of her work at The Bello Collective, The A.V. Club’s Podmass, and The Podcast Host.