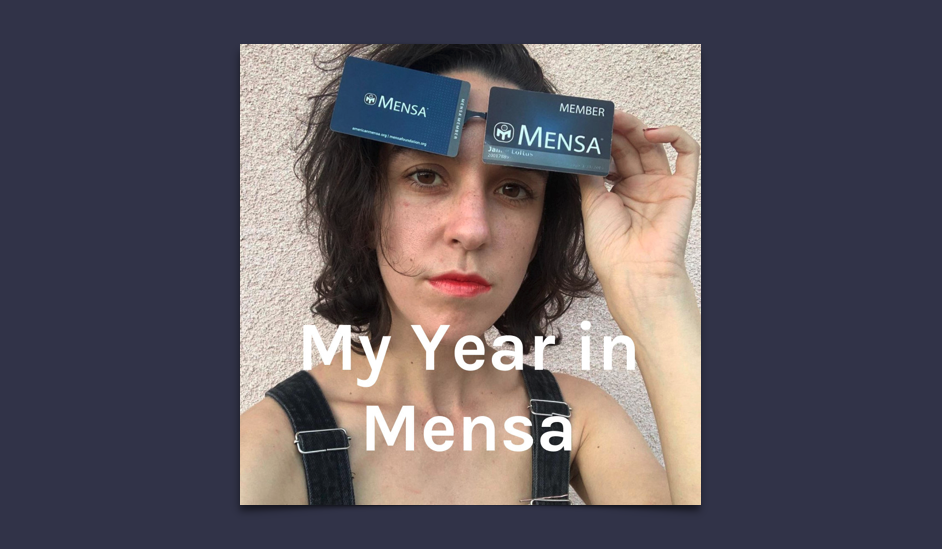 Like many young comedians working today, Jamie Loftus finds her greatest humor in the awkward moments of her own life. Famous for eating a copy of Infinite Jest page by page — both enacting and parodying the excoriation many women have felt at frequently being prescribed the book by obnoxious men — Loftus is adept at taking any situation to new, uncomfortable extremes.

In her latest work, the limited-series podcast My Year in Mensa, Loftus shares her more-than-uncomfortable experiences in Mensa, the world’s oldest high-IQ society. Stemming from her personal misadventures with Mensans, Loftus takes the organization to task for its hypocritical beginnings and more recent condoning of online harassment. For a group filled with people who have been bullied for their intelligence, Mensa, Loftus argues, has overcorrected in taking that inner pain and turning it outwardly against the world.

Loftus’s primary criticism of Mensa goes back to its founding in 1946, when two lawyers, Roland Berrill and Lancelot Ware, wanted a group that would foster apolitical debate and conversation between “highly intelligent” people. However, their marker for intelligence — scoring 132 or above on the Stanford-Binet IQ test — was inherently flawed, since that IQ test was never meant to prove a person’s definitive intelligence.

The test’s creators understood intelligence to not only develop over time but to potentially increase by means of study. Later research also showed that the test was skewed toward students from affluent white backgrounds, making it harder for students of color and poorer students to score highly on it. In fact, the creators of the test only intended it to be used to identify children who were not learning as quickly as their peers and needed extra attention from teachers. In other words, the IQ test was meant to help underperforming students rather than exclude them, which is exactly what Mensa does.

After detailing this history, Loftus tells her story of joining Mensa and attending their 2019 Annual Gathering, where about 2,500 Mensans spent five days attending talks, eating repetitive buffet food, and expressing their quirks in the one place where they all felt truly welcome. She uses her experiences there to demonstrate how Mensa fails to live up to its central goal of fostering meaningful intellectual growth.

But much of Loftus’s criticism of Mensa also comes from her online interactions with its members and the organization’s shortsighted persistence to defend Firehouse, Mensa’s most active and aggressive Facebook group. Firehouse is a place where members feel free to express Libertarian and Far-Right views, block users who question those views, and intimidate people like Loftus for making fun of them.

Loftus first entered Mensa to poke fun at the group in an online column. After scoring high enough for admittance, she wrote a follow-up post titled “Good News, They Let Dumb Sluts into Mensa Now,” which, despite its self-deprecating angle, understandably angered a number of members for describing the organization as a pointless meeting ground for friendless virgins and “rich assholes who think they’re smarter than everyone.”

In response, members from both the general Mensa population and the Firehouse Facebook group started sending Loftus harassing messages, which she would screenshot and share on Twitter, refueling a cycle of even more online harassment. This all culminated in a death threat, which underpins the fear and emotion Loftus feels as she takes listeners into the 2019 Mensa Annual Gathering to confront the very people she’d been kicking back and forth with online.

From a storytelling standpoint, My Year in Mensa gets a little garbled jumping around between its critical history of Mensa, Loftus’s verité reenactment of her increasingly discomforted run-ins at this conference, and the retelling of her online harassment. A climactic moment at a Mensa Firehouse party, where she’s finally face-to-face with her online aggressors and is pushed to tears when a paranoid member tries slapping her phone out of her hand, ends up falling flat for a lack of tension-building.

Loftus’s pauses for jokes and asides, punctuated by an ironic DJ airhorn, can also be a little distracting. But overall, they serve a greater purpose of satirizing Loftus’s own satire of a group she finds politically, morally, and practically disagreeable, and in some way, this satire of a satire comes off as honesty. For as much fun as Loftus has cracking wise at the Mensa Annual Gathering, she’s equally as thoughtful in her actual critiques.

The two points she keeps returning to are: 1) doing well on a test one time doesn’t make you a better person and 2) it’s off-putting and even offensive to pay $79 a year to tell yourself you’re smarter than other people. She makes a strong case in a fair, albeit one-sided account, but interestingly she doesn’t simplify her story into that of a changed heart.

Her in-person Mensa encounters depict a group with a clear superiority complex and no meaningful qualms with the effects of online harassment. Although members repeatedly promise their online personas are nothing like their true selves, there comes a point where that stops being true. Suggesting Mensa members might murder you is definitely past that point.

Loftus leaves the conference with a newfound empathy for those who come to Mensa primarily for friendship and mental stimulation, but an even more confident disapproval of the hurtful baggage that overpowers the group’s online presence. As she says, “If you can’t reconcile the person you are online with the person you are in real life, something in your community has gone wrong.”

My Year in Mensa is a story, felt in real-time, of how the internet and social media are so finely tuned as to transform a single joke into a saga of awfulness. What’s worse, when Loftus brought attention to the Facebook death threat by sharing it on Twitter, her account was suspended for posting a violent threat. That’s just the kind of techno-cosmic injustice podcasts were made to explore.