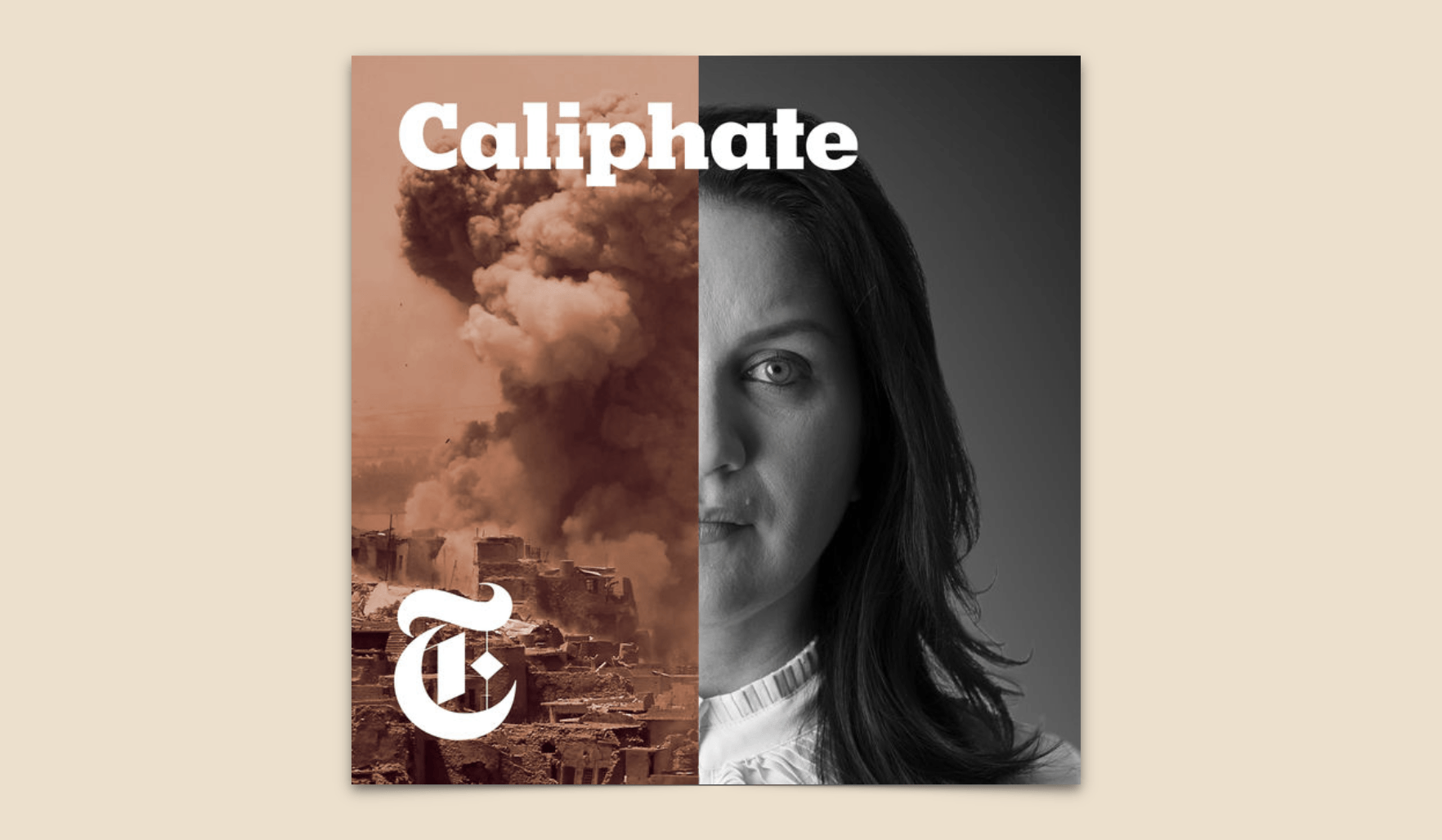 Rukmini Callimachi, a New York Times reporter who has covered the Islamic State since 2014, asks a single, seemingly simple question in the prologue to the ten-part podcast Caliphate: “Who are they?” She wants to understand what drives people, some who are or were citizens of western democracies, to join the Islamic State. She also wants to understand what they did after joining, while in Syria and Iraq, and how they feel about what they’ve done. Caliphate is the result of much of this labor, with reportage that aspires to a level of insight and nuance the “mainstream media,” as her co-host Andy Mills calls it, western governments, and the Islamic State itself rarely reach.

Callimachi and Mills establish that they will attempt to understand ISIS in two ways. First, they focus on a single recruit who refers to himself by a nom de guerre: Abu Huzayfah. Born in Pakistan and raised in Canada — the podcast intentionally withholds which province he comes from to protect his identity — Abu Huzayfah becomes the podcast’s point of entry into trying to understand who or what ISIS really is. At the very least, Huzayfah’s story can show what ISIS is to one western recruit who has now returned to live in Canada. But by extension, through Huzayfah’s recounting of his experiences, a greater understanding of ISIS should also emerge.

Second, Mills tracks Callimachi as a reporter, following and recording all of her conversations, phone calls, trips to Mosul, and ventures inside potentially booby-trapped buildings. Mills follows Callimachi and documents her research processes, ethical quandaries, her doubts and excitements. The journalistic process provides as much to marvel at here as the stories the journalists tell, and depicts a battle as compelling as the one they’re covering: the challenge of obtaining truthful, reliable, coherent information about a subject antithetical to these very concepts.

Early on, the two hosts establish a question and answer format, with Mills asking for basic clarifications and definitions. This is intended as a gentle way of guiding the listener, and of expanding Huzayfah’s narrative. (It becomes a little tiresome, however, when Mills interrupts Huzayfah’s interview to ask a question that is clearly designed to provide context but is masked as part of an ongoing dialogue. Or when there is willful ignorance: “C S I S?” Mills asks. “This is cee-sis,” Callimachi corrects him, “the Canadian intelligence branch.”)

For much of the first five episodes, Callimachi seems determined to establish Huzayfah’s credibility with such earnestness that his story can begin to seem suspicious and too good to be true. While Huzayfah tells his origin story, the podcast patches in clips of historical background and speeches from Presidents Bush and Obama and the Yemeni-American imam Anwar al Awlaki. This collage of information attempts to contextualize Huzayfah’s eventual path to radicalization, his recruitment into ISIS and convoluted journey to Syria, as well his time as a religious police officer. These are clips we have heard before: presidents claiming not to be at war with Islam, while clerics—and Abu Huzayfah, in this case—claim the exact opposite. During his interview, Huzayfah repeats ideology verbatim. He is well-trained and educated as a jihadist. And, most extraordinarily (especially to Callimachi), he is willing to recall and recount some of the punishments he meted out. In one episode, he describes the smell of blood lingering on his hands and clothes after stabbing someone in the heart several times as part of an execution. These details are extraordinary to anyone, and Callimachi makes it a point to explain how remarkable Huzayfah’s story is. His candor, she acknowledges, even in expressing his hesitation and how much he struggled to punish and kill, makes him a unique, special source for information about life in the Islamic State.

However, his guilt and calmness exist at odds with one another. Tone and content don’t align. And you begin to wonder why Callimachi doesn’t question how someone who feels so guilty they needed to escape, can also speak with such detachment about murder and justify his actions by claiming that what he did happened in a war zone.

Then, about halfway through the podcast, Callimachi reveals a discovery that casts a shadow of doubt across all the previous episodes. Stamps in Abu Huzayfah’s passport contradict the timeline of his story. Despite extended efforts and contacts deep within the U.S. and Canadian governments, Callimachi can’t answer or explain his inconsistencies. In a Reddit AMA (Ask Me Anything), she writes: 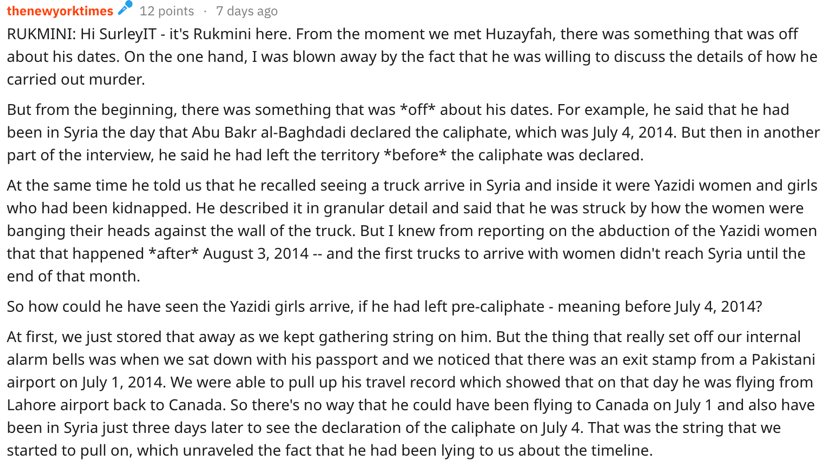 But Callimachi does try to understand why Huzayfah might lie, and in doing so reveals the level of empathy and kindness she brings to her journalistic process. She suggests that arriving pre-caliphate lends Huzayfah more naivety. He could have joined to fight against Bashar al-Assad, not to become a part of “the group we know it [ISIS] to be.” In the end, though, his story cannot represent the caliphate. Instead, it is one small—and possibly contrived—bead in a much larger, and still inscrutable, mosaic.

The podcast shows the challenges of verifying any story, however detailed and remarkable—and however much a story is exactly what a reporter might want to hear. Part of Callimachi’s process of reporting, then, is to engage the subject despite obvious inconsistencies. But the audience isn’t privy to these issues with Huzayfah’s story until the sixth episode, so there is a sense that the original question—“Who are they?”—is far more complex than one man’s dubious narrative.

This challenge leads the podcast away from Abu Huzayfah and into Mosul, as Iraqi forces are on the cusp of retaking the city from ISIS control. There, Callimachi and Mills are embedded with Iraqi soldiers who help them enter a building that ISIS once occupied. Informants verify the building and its location, and lead Callimachi through rubble to a prized discovery, one that she’s been hoping to find for years: a briefcase full of official ISIS documents. The contents of the briefcase eventually reveal, after much scrutiny, the depth of ISIS’s bureaucracy and how the organization operated from a perspective wholly different from Huzayfah’s. There is less ideology and more taxation. There is a government at work that, as Callimachi points out, is really good at governing.

This portion of the podcast showcases reportage more than it provides a close, humanistic portrayal of a former ISIS member or attempts to answer the question of “Who are they?” Even the two penultimate episodes — “Prisoners,” parts one and two, which examine the Islamic State’s enslavement of Yazidi girls — maintain a distance from their subjects. “Chapter 9 of our series,” Mills writes in the AMA, “[shows] that there is a tension between wanting to chase your curiosity as far as you can and not wanting to cause human beings any more pain than they are already in.” These young Yazidi girls, who were torn from their families and sold, often multiple times, were also prisoners of ISIS. Their lives are forever altered, in ways probably unspeakable, revealing the depth of ISIS’s reach and impact.

Caliphate’s final episode, “One Year Later,” returns to Abu Huzayfah in a way that further confounds his story and deceptions. Huzayfah has become more “adamant” in his ideology since fleeing from his ISIS post and returning to Canada, but claims that “you don’t have to worry about the violence part. That’s not gonna happen. Not ever. Unless I’m in the proper time and place for it — the battlefield.” His continued radicalism has raised concerns among Canadians, including members of Parliament. There are suggestions that Huzayfah has “gamed the system” because he lives in Canadian society as if he’d never traveled to Syria. So, what can be done? Without forensic evidence or data that can prove anything he did (or didn’t do) in Syria, it will be challenging, if not impossible, to convict him of any crimes. Huzayfah claims to be cooperating with law enforcement, but also now denies he ever committed the acts of violence he described in his interviews with Callimachi and Mills.

“Who are they?” is a question that, in the end, this podcast never fully answers. Perhaps the journalists take too much from Serial and feature themselves too prominently in a story about others. Nevertheless, Callimachi’s reporting brings us to closer to an answer, without judgement or bias. Conclusions, one assumes, are up to the audience.