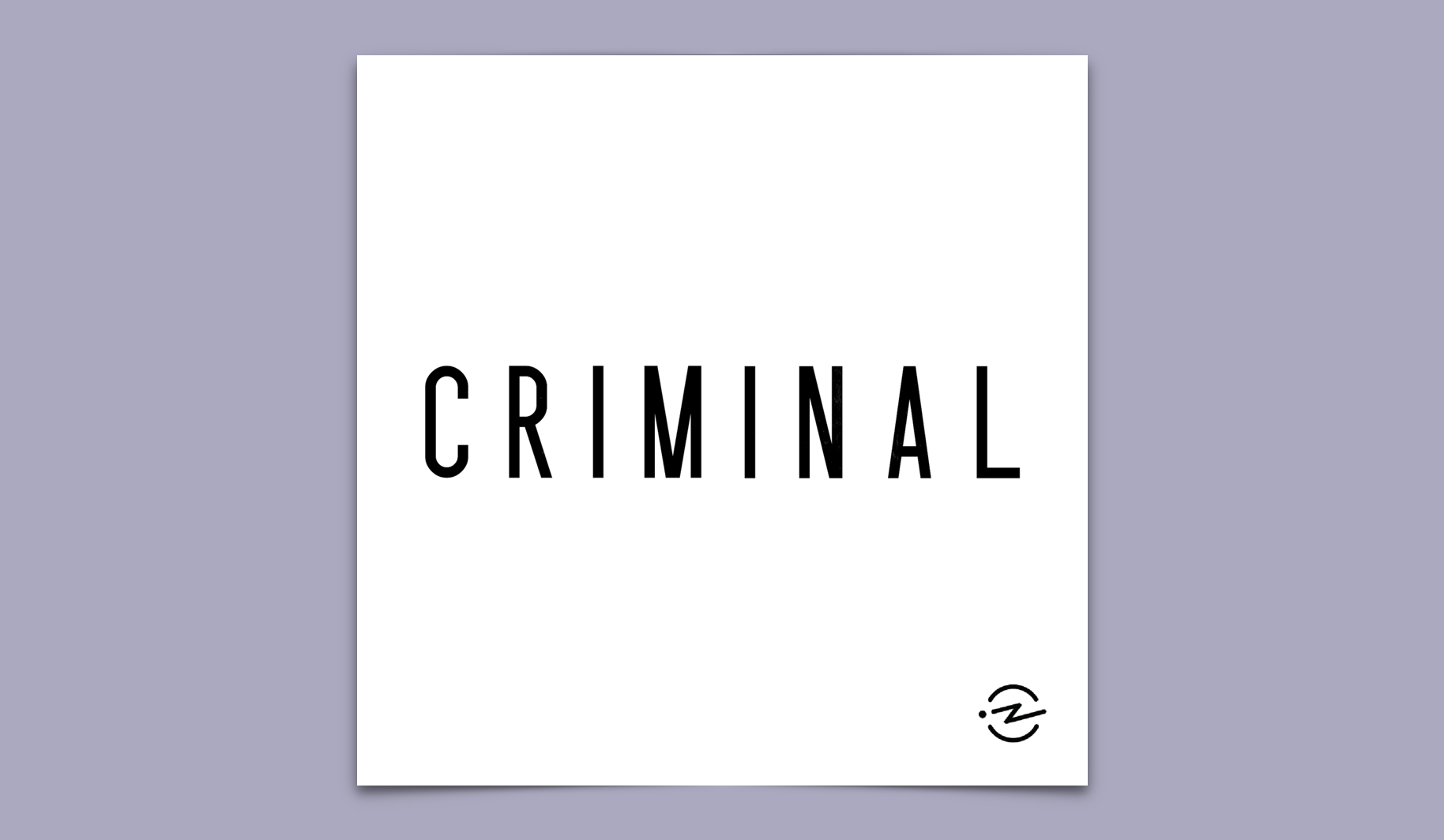 What happens when you find out that the person who stole your identity wasn’t a stranger but someone you’ve known all your life? How do you manage after having been locked in a classroom while an active shooter roams the corridors? How do you feel when you discover the man you’ve fallen in love with doesn’t exist? And what is it like growing up the daughter of an international marijuana kingpin? Criminal casts its net wide. It considers no crime too grievous, too trivial, too grisly, or too quirky: murder, counterfeiting, extortion, assault, hacking, hijacking, stalking, streaking, identity theft, book theft, plant theft. Everything is held up to the light. The podcast, which began in 2014 (before Serial), has found both a devoted following and wide acclaim. It continues to stand out in what has become (since Serial) an increasingly crowded field.

Criminal is happy to dwell in the details of minor crimes (the outfit one wears before streaking at the Super Bowl, the routine of a man who gives every police officer he sees the finger) but it also regularly tackles more serious issues, including immigration, police brutality, abortion, domestic abuse, paedophilia, hate crimes, the death penalty, to name only a few. The producers never forget that these are structural problems—deft narration sets specific crimes in their historical and social context—but the show is most interested in the individuals “who’ve done wrong, been wronged, or gotten caught somewhere in the middle.” Ultimately, this is a podcast about people. Why do we commit crimes? How do we respond when they are committed against us?

There is much that makes Criminal a reliable pleasure. Host Phoebe Judge is a gifted interviewer—adapting her style to suit the guest, prompting those who need it, and giving space to those that don’t. She has the rare ability to ask tough questions without judgment or confrontation. It helps, too, that she is armed with a terrific sense of humor. The writing is exemplary—elegant, dynamic, witty—and the show is sharply edited. It suffers from none of the bagginess that plagues many newcomers to the true-crime genre. Other shows unfold slowly, often repetitively, across multiple episodes and many hours. Criminal tells rich stories start-to-finish in single episodes that often run under 30 minutes.

The overall narrative polish can be attributed to the trio of female producers—Lauren Spohrer, Nadia Wilson, and Judge. Unlike the crowd of amateurs who are figuring out how to tell a story on the job, these women, trained as public radio journalists, are professionals. It shows. In their podcast, no sentence is superfluous, every minute is in the service of the story, and facts are checked with rigor. The team’s expertise also means that even though Criminal often focuses on long-solved crimes, they are able to present them without sacrificing suspense. Rob Byers, whose understated sound design complements the story without ever overwhelming it, also deserves much credit. And it is impossible not to mention Judge’s melodious voice, so mesmerizing that it even renders pleasurable the obligation of listening to her advertise mattresses and meal kits.

All of this, however, is secondary to what makes the show truly superlative: its ceaseless curiosity about human behavior, illicit and licit alike. The disparate episodes are united by an ethos of open-minded inquiry. This commitment to discovery means the show avoids preaching—Criminal prefers asking to telling—yet remains edifying. It achieves this by interviewing a wide range of people: victims, bystanders, lawyers, journalists, historians, conservationists, scientists, folklorists, coroners, policemen, and, significantly, the criminals themselves. Through these often impressively articulate people we learn about medical procedures, complex legal terms, the properties of plants, the gymnastics of making a phone call from Federal prison, all without the hint of a lecture. The show’s brand of curiosity is neither the whodunit kind that the genre thrives on, nor is it the morbid variety that fuels our endless consumption of fictional and factual crime. Instead, it is more exuberant and more profound—a compassionate curiosity.

This spirit is best on display in the off-the-cuff, unscripted portions of the interviews, when Judge attempts to formulate another question in response to a guest’s remarks. She displays a tremendous capacity to put herself in the shoes of her guest, and imagine out loud what she would have done or how she would have felt. These moments are marked by hesitation and repetition (and stand in sharp contrast to the rest of the tightly-scripted show) but it is precisely Judge’s fumbling for the right words that make clear the genuine curiosity that undergirds the show. She is fascinated by her guests and she wants to better understand them. You can hear her thinking in the pauses: how can I find out more about this singular person? Criminal wants to plumb the depths of its human subjects—to explore their motivations, their reasoning, their emotions, their lives. Practiced this way, curiosity is a virtue.

There are no mediocre episodes (an accomplishment considering there are now more than 100) but several are extraordinary. “No Place Like Home,” a heartbreaker, follows a white-collar criminal who finds himself imprisoned alongside a group of people who are no longer prisoners, never should have been, and yet have no place to go. In “Wildin” we hear from a boy, wise beyond his years, who fled violence in Honduras to seek refuge in America and instead found himself confined. His story renews rage at what happens to those who arrive at the border in desperation and with hope. It also serves as a necessary reminder that this violation of children’s rights preceded the current administration. “Walnut Grove” tells of unthinkable violence at a private prison for juveniles and then, remarkably, also investigates the people that depend on the eco-systems that emerge around these facilities. The heartwarming “He’s Neutral” introduces us to a regular guy from Oakland, who with a well-chosen statue accidentally created a place of worship in his desperate, but successful, attempt to reduce crime in his neighborhood. In “Pearl Bryan” we discover a lurid nineteenth-century murder immortalized in a ballad (“Back then a lot of popular music used what we now call a ripped-from-the-headlines formula. Think Law and Order: SVU, with a fiddle.”) and then are treated to a new rendition made especially for the show.

Perhaps the podcast’s greatest achievement is that the clearest articulation of its ethics come, unprompted, from its guests. Behind Criminal’s microphone, ordinary men and women, often recounting the most tragic or terrifying moments of their life, transform into philosophers of dignity, full of wisdom and insight about human behavior. They speak poetically on suffering, like the chief of police whose son was shot by an officer: “The pain was unbearable. The same kind of unyielding pain: it takes the breath away, it darkens the room, and it isolates you from your reality.” But also, when discussing people who have committed heinous crimes, the guests show themselves capable of remarkable compassion.

Take, for instance, the podcast host who mid-way through describing being relentlessly harassed for eight years, pauses to say about her stalker, “I can’t help but thinking that someone is failing this girl” or the lawyer who contemplates the solitary confinement of a notoriously violent juvenile offender (“We don’t ask ourselves what amount of ruin is acceptable for somebody we send to prison”) or the crime-solving ex-soccer pro who refuses to fully condemn the homeless man who murdered his partner, (“I think people are good and bad and I think he is one of those people”). This kind of thoughtfulness is not rare but regular in the show. It is by finding people like these that the show manages to steer clear of moralising without sacrificing a sharp sense of right and wrong. In this especially, Criminal offers a masterclass in how to think and talk about crime.

Tara K. Menon is a Junior Fellow at the Harvard Society of Fellows