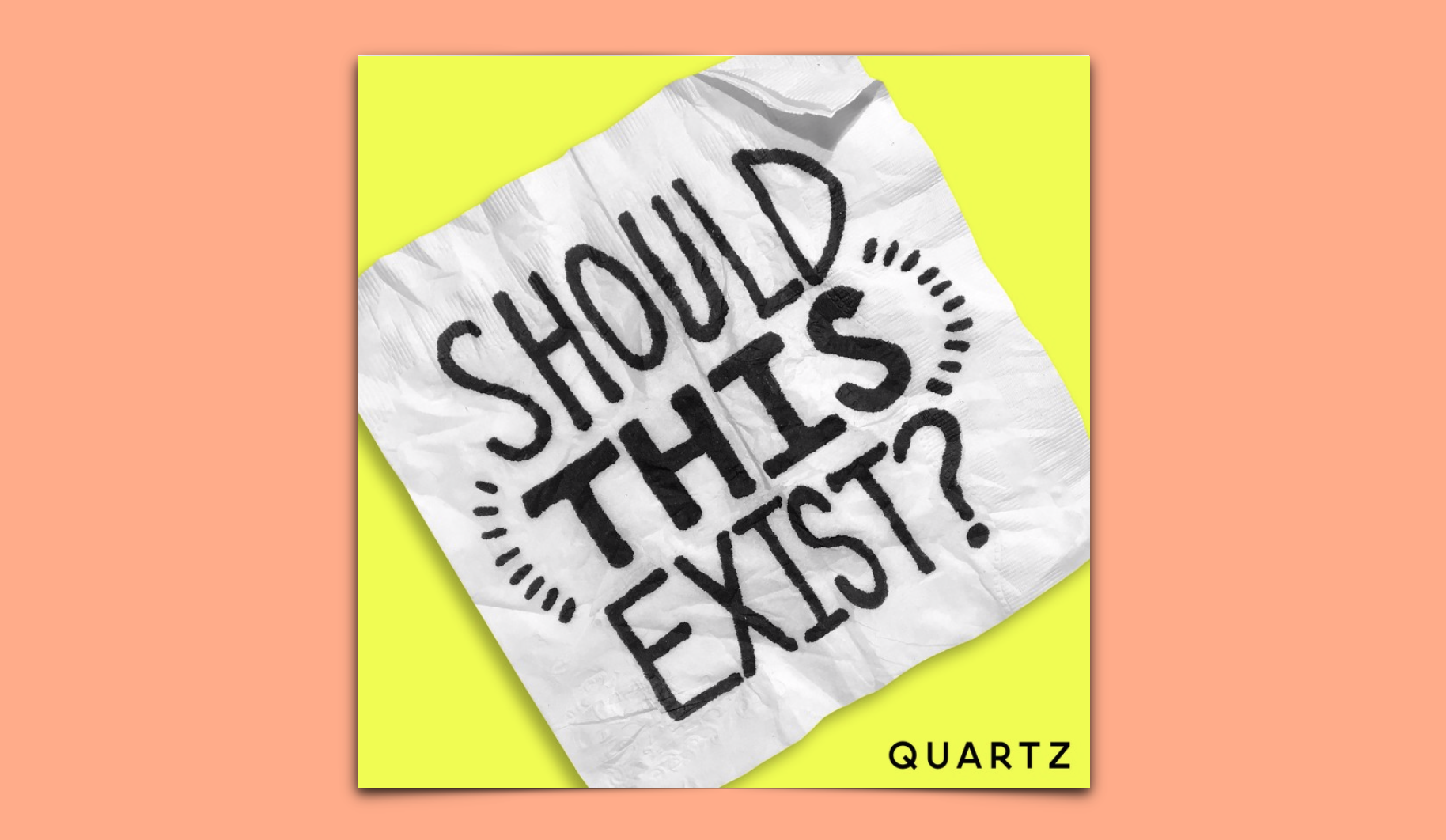 The first job of an entrepreneur is to find something to correct in his or her environment. Once fixated, the entrepreneur will determine how their problem can be corrected. There’s more to it, obviously – talk about areas of high yield and low yield, supply chain issues, and strategies to convince the self, shareholders, and the public of the necessity of one’s goal. But make no mistake: the first step in being an entrepreneur is to find something amiss. This noticing, or problematizing, is the creation story of the entrepreneur’s mythology. It is the thing which drives one to reroute a stream or tunnel into a mountain.

But who problematizes the problematizers? Enter Should This Exist?, a podcast hosted by entrepreneur and venture capitalist Caterina Fake, co-produced by the business and tech website Quartz and the Wait What network, a media startup founded by two ex-TED executives. The show promises to examine world-changing new inventions and their potential impacts – positive and negative.

Each episode of Should This Exist? begins with an introduction to the invention under consideration. Over the first six episodes, these are: a helmet that uses electrical stimulation to promote learning in adults; a therapeutic chatbot that responds to users with Cognitive Behavioral Therapy questions; computer software that analyzes facial movements to detect mood; a new Concord supersonic jet; and CRISPR, the MIT innovation that allows gene editing and was the center of several news articles about the eradication of malaria.

The researchers or entrepreneurs who saw the potential in these inventions explain their creations to Fake. All but one (Kevin Esvelt, CRISPR) are developing their technology for private business. They offer rosy depictions of a solution to a problem: a therapist on call 24/7, learning with the rapidity of a child again, a computer that can tell you when you’ve had enough internet for the day. Following their pitches, Should This Exist? convenes a panel, moderated by Fake, that considers the various ways that this technology could, in fact, harm humanity.

It’s like a real-life version of a scene from the film Donnie Darko, in which Donnie and his girlfriend present an invention to their science class. The science teacher asks a reasonable question, and then the burnouts at the back make grotesque, if technically reasonable, suggestions.

Would that Should This Exist? had the emotional weight of that minute-long fictionalization. The most disappointing aspect of this podcast, which has as its goal a very noble mission, is that it lacks any suspense. Not one of the inventors or entrepreneurs in the first six episodes has heard the panel’s objections and reconsidered the impact of their product, let alone said “My god, they’re right! What am I doing?”

Instead, there are only justifications and pivots back to the original vision, dodging questions and abdicating of responsibility in the process. The researcher behind the emotion-reading software avoids answering ‘How will marketing companies take advantage of this?’ while priding herself on not selling to foreign intelligence agencies. The man trying to bring back the Concord jet hand-waves good points about climate change with an answer that begins with “I like to believe…” and proceeds by ignoring the jet’s outsized carbon footprint.

“Belief” is at the heart of all things bought and sold, and in particular new inventions: belief that a therapist chatbot could relieve pressure in your real-life relationships; belief that we can trust people not to use our emotional states against us; belief that flying to London in 3.5 hours is at all necessary for the average person. Fake, to her credit, often isn’t buying it. Despite her wealth and her history, she is markedly skeptical of capital’s ability to behave in the best interests of everyone. She showcases some people who feel the same way.

Most notable of these is Kevin Esvelt, the MIT researcher behind the gene-editing CRISPR. The episode devoted to CRISPR  (“We can change the DNA of an entire species–– in the wild”) shows an academic who is largely skeptical of the outside world. At one point he says, “I don’t trust our current institutions to regulate this properly.” This in and of itself is a kind of myth, too, one that capital likes to tell itself: only the academics get to be moral.

In Esvelt’s case, this allowance results in a monologue so grandiose that one wonders how he gets away with it. As a call to action, it’s powerful only within the dichotomy between an ethical public sector and the any-means-necessary private one; but as an actual statement of belief it is still too humanistic, relying too much on man as the apex of evolution, and technology as tools waiting to solve humanity’s problems, a perspective that Fake herself claims she is beyond. The thing missing from Should This Exist? – in fact, the thing missing most from the whole umbrella of TED-esque media, is an application of moral philosophy at the same level of detail the hosts and guests go to with their technology. Often, all we get is Utilitarianism 101, the same tired questions asked even by the local news, that barometer of the lowest common denominator.

The problem is that we don’t really consider what it is that makes the use of a piece of technology moral or not. The real question that we ask when we ask “Should this exist?” is “Can we live with the consequences of our problematizations?” Based on the reactions of most of the entrepreneurs – returning to a narrow view that validates their ego in response to basic questions (and during a period when broad environmental consideration has become necessary for the survival of the human race) – one might think the answer is, “No.”