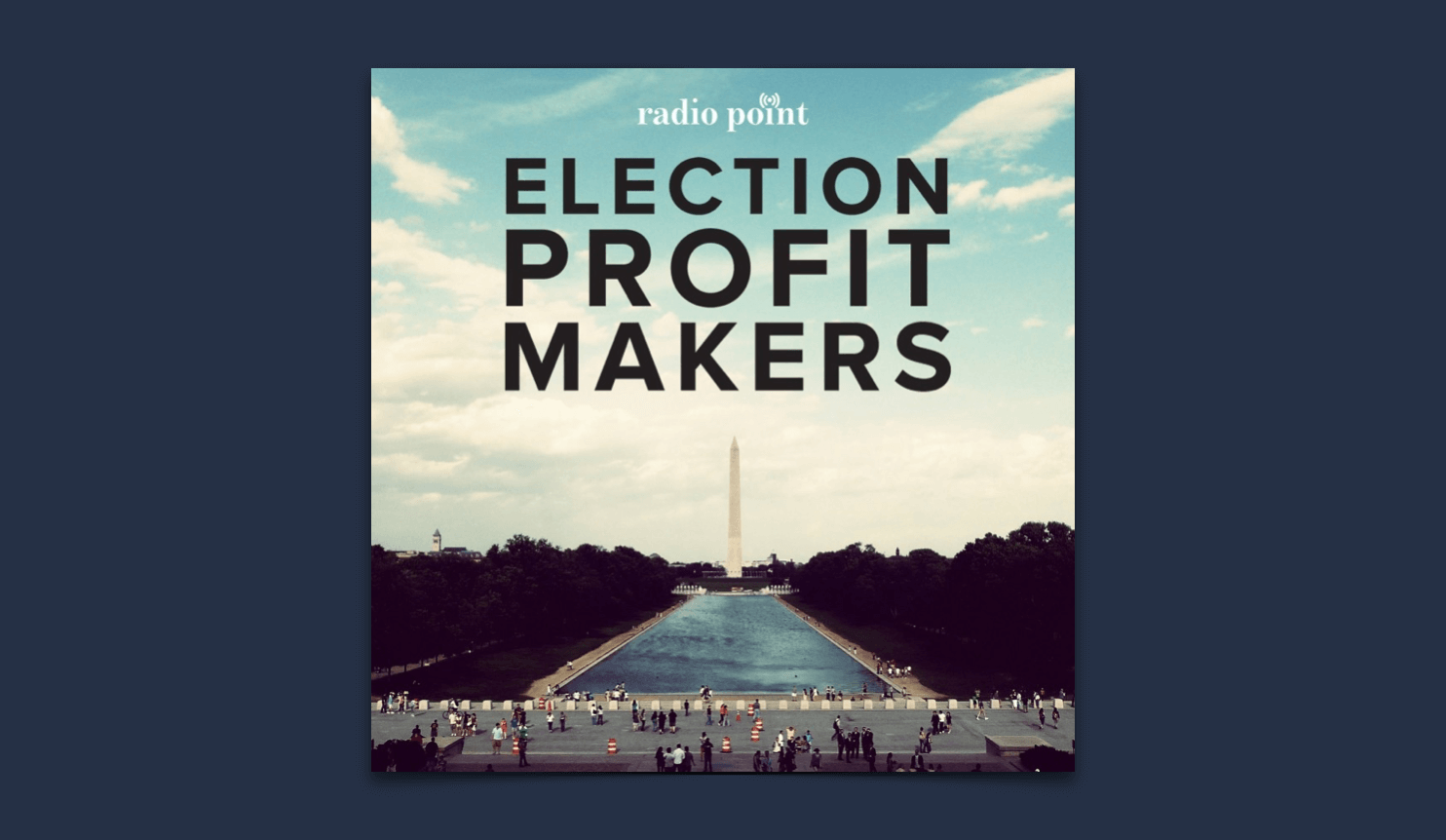 In 2016, the writer and cartoonist David Rees discovered that his childhood friend Jon Kimball was spending an awful lot of time, and making an awful lot of money, on a website Rees had never even heard of. The website was Predictit.org, based in New Zealand, which allows users to bet up to $850 on various American political outcomes like presidential and congressional races (because the site is operated “for academic purposes,” it has managed to avoid falling foul of US anti-gambling laws).

Rees thought this sounded like a good basis for a podcast, and so the two of them – joined later in the show’s run by producer Starlee Kine, known for her work on This American Life and Mystery Show – put out an episode every week until the day after the election, discussing their winnings and losses, whilst frequently veering off on delightful, often bizarre tangents.

It’s within these tangents that much of the joy of Election Profit Makers lies. Even in the 2016 season, which for the most part kept discussions political, the hosts would spend a significant amount of time on their arcane personal interests, like Kimball’s penchant for ranking city skylines. In 2020, with the addition of extra content for paying Patreon members, the Election Profit Makers universe has expanded exponentially.

There have been standalone episodes on internet domain name speculation (another Kimball obsession) and repairing tape recorders (one of Rees’s). An EPM Movie Club has sprung into being, which has so far boasted perhaps the most sincere and lovely ode to the Queen Latifah film Last Holiday in existence, as well as a passionate feud about whether or not the “technology” existed during the seventies to create the convincing fake mustaches sported by the villains in The Taking Of Pelham One Two Three. Recently, listeners have been treated to the “Ban Wars,” which – for donations to voting rights organizations that ended up totaling over $20,000 – allowed anyone to ban anyone else from the show (some of the banned: God, Jeff Goldblum, and Rees’s pronunciation of “Oregon”).

As you may have surmised from that deluge of esoterica, there’s a rich vein of absurdism that runs through Election Profit Makers, which is only fitting: we do, after all, live in absurd times. While there’s an obvious educational value to the better-known podcasts that cover similar topics – Pod Save America, The Daily, Slate Political Gabfest – none of them quite soothe the soul in the same way as one of Rees’s spiraling, musical, riotous rants. Election Profit Makers is pitched directly at the crazy tenor of our current reality.

The hosts – all Democrats, though Kimball is often lovingly mocked for his comparative centrism to Rees and Kine – are all very honest about the toll the constant stream of awful news takes on their mental health. The final edition of the 2016 run was awash with tears – even now it’s a difficult episode to hear. Listening to the podcast every week offers a similar comfort to meeting up with old friends, and in an era where that has become a difficult thing to do, Election Profit Makers feels all the more precious.

Another of the podcast’s many appeals is that the hosts all clearly enjoy each other’s company. Kimball and Rees first met during their school days in North Carolina, and they have the easy chemistry you’d expect from such a long friendship (Rees, Kimball and Kine are all in their forties now). And Kine slips in so well you’d think she went to school with them. Their different styles – Rees’s exuberance, Kimball’s mellowness, Kine’s ardency – gel nicely. They all listen to one another. They never interrupt. When Rees starts off on one of his Dadaist riffs, Kimball and Kine are right there with him. It’s a pleasure to hear the three of them discuss matters both serious and silly.

If you’re anxious about the state of politics right now – and how could you not be? – Election Profit Makers offers an entertaining way of processing the barrage of insanity with hosts who are just as bemused and exasperated as you are. Happily, this year, in anticipation of a bumpy post-election period, the podcast is intended to run at least up until Inauguration Day. They’ll be there as long as we need them. Thank goodness for that.