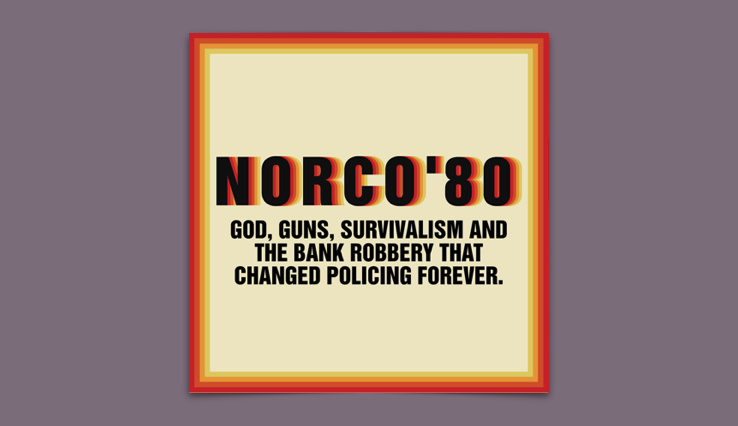 Norco 80, a new eight-episode series from LAist studios, chronicles a deadly bank heist that changed the fabric of a small town while influencing an entire generation of law enforcement to adopt military-style policing tactics that employ automatic weapons, helicopters, and leverage advanced tactical training. Produced and hosted by Antonia Cereijido, the podcast is based on the namesake 2020 book by Peter Houlahan.

Episode one opens with a gripping timeline of the events that took place in Norco, California, a town with fewer than twenty-thousand residents. Tucked in the northwestern corner of Riverside County, Norco backed up against rural countryside and was known as a sleepy horse community. Yet, on May 9, 1980, after carjacking a van and kidnapping its driver, five men stormed the Security Pacific Bank, fueled by their religious belief that the end of the world was near, emboldened by their possession of heavy artillery and IEDs, and motivated by their bleak job prospects to try something radical. In the ensuring chase, three of them were killed, as was a police officer, Jim Evans.

This was a watershed moment for law enforcement, who were increasingly finding themselves under-resourced to deal with a public who had legal access to assault rifles. The widow of Jim Evans, as well as several other surviving officers who were present at the scene, recount how their department-issue pistols were no match for the weaponry of the Norco robbers. Forty years later, the frustration of not being listened to by higher ups about increasingly being outgunned is palpable in Cereijido’s interviews. Evans had mentioned his worries about this imbalance to his wife and had planned for his own demise, which he correctly predicted was inevitable as the violence between police and citizens continued to escalate. Compounding the problem was that cops also had wanted better communication systems; Riverside and Corona city officers, while in joint pursuit at Norco, had no way to speak directly to one another and were not able to operate in a cohesive way, adding to the chaos.

All of this is further contextualized in Cereijido’s reporting by putting the Norco robbery and shootout against the backdrop of 1980s America. The economy was in a deep recession caused in large part by policies from the Federal Reserve, fueling anti-government sentiments. In addition, late stage Cold War tensions were high. Earlier in the year, President Carter had announced a boycott of the summer Olympics in Moscow to protest the Soviet Union’s invasion of Afghanistan, renewing hostility between the two superpowers and triggering people like George Wayne Smith, the alleged mastermind of the Norco robbery, to remember the terrifying duck and cover drills of his 1960s childhood.

Running in parallel was that the US at large and Southern California in particular were entering an era of rising bank heists. The peak would not come until 1992, when there were 2,641 robberies and attempted robberies in the state — or one every forty-five minutes of each banking day, as noted by Houlahan’s book. In part what led to this spree was the continued development of the Southern California freeway system, which offered efficient getaway routes compared to local surface streets.

As the episodes of Norco 80 build, Cereijido chronicles how the forces of infrastructure, international politics, and national economic worries coalesced alongside Smith’s increasing religious fervor. Cereijido pinpoints how Smith and his crew of four other men were motivated in the first place to try and rob a bank, and how deeply they believed they were both going to get away with it and were justified in doing so. Before that, Smith, a Vietnam veteran, and his housemate Christopher Harven worked for the Parks Department and grew marijuana to supplement their incomes.

Cereijido effectively argues that events like Norco engendered a radical overcorrection in terms of arming police. In the absence of meaningful gun control legislation, this has created a situation that is not unlike the concept of nuclear parity during the Cold War.

From a production standpoint, Norco 80 suffers, in a minor way, from the same thing that many podcasts do: unneeded repetition. There’s so much that is clear and compelling in the dispatch calls and interrogation tapes. It’s remarkable that these recordings have survived four decades, and the immediacy doesn’t need further explanation. However, Cereijido’s hosting is overall extraordinary. It is under her direction that Norco 80 transcends a cops/robbers or good guys/bad guys binary, and instead leaves listeners asking their own questions. Especially considering our contemporary era of police brutality, she challenges the audience to consider how we got here in the first place.