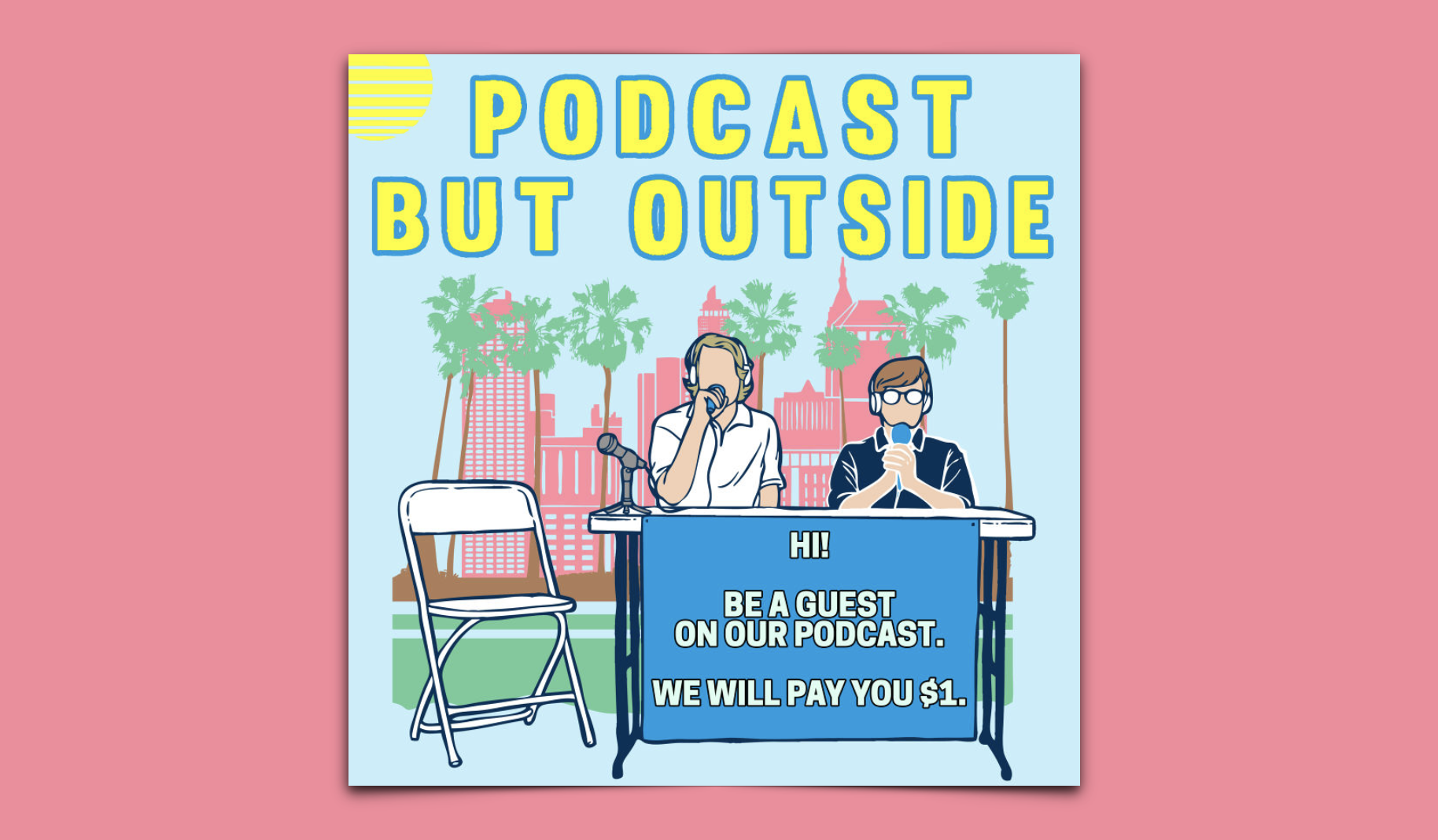 (Credit: Podcast But Outside)

Never has there been a more aptly-titled podcast than Podcast But Outside, a show where two comedians interview strangers on the streets of L.A. Each word conveys crucial information about the show’s thesis: “Podcast” evokes a pair of Millennials getting on a couple of mics and just going where the vibes lead. “Outside” tells you the recording location—outside—where the hosts interview whatever passers-by are willing to sit with them for a few minutes. Even the “but” is doing work: it’s a dog whistle for those steeped in internet culture and humor. Each piece could work independently as a podcast concept. But together, they make a fascinating experiment that is sometimes greater and sometimes less than the sum of its parts.

Podcast But Outside contains the elements of the archetypal podcast: interesting people conversing. The medium is one of the purest vehicles for personality, and these hosts are in no short supply. Andrew Michaan, who functions as the play-by-play guy, has a background in stand-up. Cole Hersch, who does color commentary, was a viral Viner, accumulating over 40 million loops during the life of the app. Their charisma and strong comedic chemistry means they could probably just shoot the bull in a dorm room and make it a listenable podcast (and maybe it would be called Podcast).

But there’s a bit more to it. Take the “But” part of the title, which indicates the humor of the show. For those who may not be Very Online, allow me to explain: in meme culture, “but” is the king of conjunctions. Many of the most popular memes follow the template “[source material] but [subversive concept].” (Pop “All-Star but” or “Steamed Hams but” into your search bar and you’ll see what I mean.) Given that, the title sets you up for the irony and subversion typical of modern internet humor, and Podcast But Outside delivers.

For example, Michaan and Hersch head off the tired cliche about white men making podcasts by taking it head on. Who better to satirize white guys making podcasts than a couple of white guys making a podcast? To that end, Michaan and Hersch lean in hard on the tropes. You want low-budget? The set-up (visible on the video recordings of the show, which are released on YouTube) has all the professionalism of a nine-year-old’s lemonade stand: card tables, science-fair posters with sharpie, etc. You want self-indulgent? The hosts go in and out of character as narcissistic, oblivious Content Creator-wannabes with delusions of grandeur. The show rides a fine line, no doubt about it. In response to a potential interviewee declining to be on the podcast, Michaan says, “Interesting—a white guy who doesn’t want to be on a podcast. That’s a first.” “He had glasses, too, which is more baffling” adds the bespectacled Hersch. Hilarious, or a self-indictment? And is the cheap and lazy production an incisive send-up, or just…well, cheap and lazy? It’s a Gestalt Switch.

Now we come to the last, and by far most striking ingredient of the podcast: Outside. Michaan and Hersch spend most of each episode performing unedited, outdoors interviews of any random stranger that wants to sit down with them. The results are all over the map. The typical interview has the air of a mild prank show, with people reacting to the hosts’ characters and bits. Sometimes they play along, but often they aren’t in on the joke. Either way, it’s funny and entertaining. 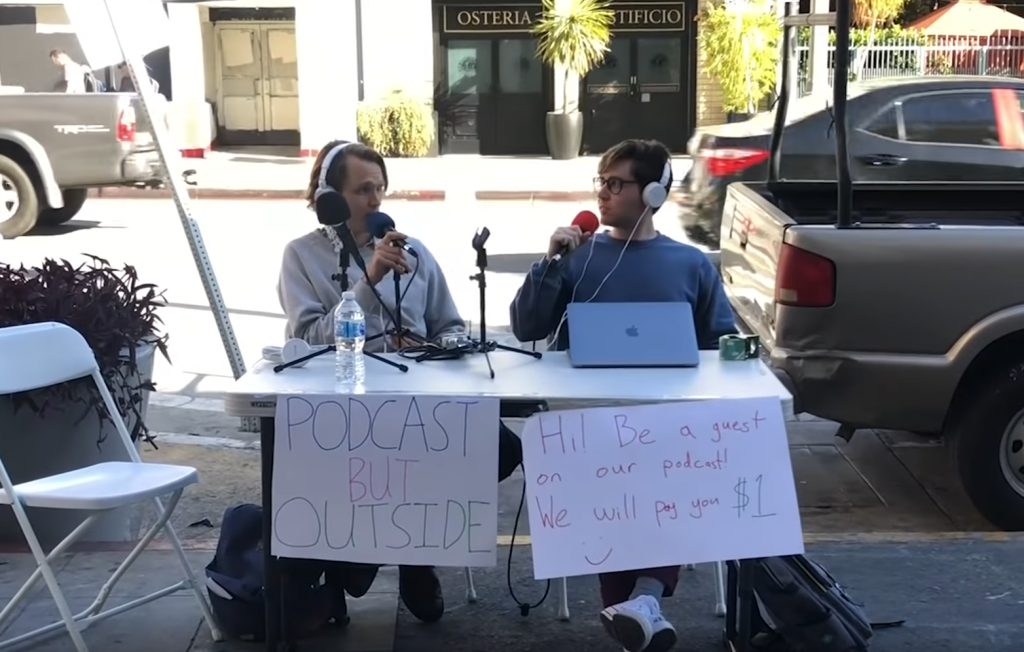 Michaan and Hersch awaiting their next guest

Other times, fascinating guests make humor a forgotten priority. Take Yin, a gay young Chinese man, who talks about being out in the U.S. but closeted in China. He says he’ll never come out to his parents, who are at an age where “new things aren’t good for them.” Another guest was an oversharing Jewish woman named Marilyn whose second husband, an older man and well-to-do “science guy on TV,” succumbed to a crack addiction that he developed late in life. It’s a very “Humans of New York” vibe, and it makes for some of the podcast’s most captivating content.

Even so, the show’s constant flirtation with chaos sometimes backfires. There are segments of episodes that are borderline unwatchable because things are too out of hand to be either interesting or funny. An aggressive person on the street threatens to punch Michaan. Hordes of drunk clubbers scream nonsense into their mics. Long stretches of time will go by where no one wants to sit down with them, making for twenty minutes of nothing but “would you like to be on our podcast?” and “it’s okay, you can walk in front of the camera.” It’s funny in an avant-garde way—but it’s not exactly enjoyable.

So if Podcast But Outside has three major ingredients—two interesting personalities, an online-humor sensibility, and the very randomness of the universe itself—how do they work together? Well, when they manage to sing in harmony, it’s content perfection. For instance, Michaan solemnly asks Marilyn how her husband got addicted to crack, to which she responds, “he started smoking it.” Or take one of my favorites of their recurring bits, the “debrief”: at the end of most episodes, the hosts ask a new guest what they thought of the episode. For some reason, almost everyone voices an opinion, despite having only happened upon the show no more than 3 seconds previously. Then they ask, “What do you think we could do better next time?” The ensuing bluff is funny every time.

That said, for a show with such a tight thesis, the podcast doesn’t always know exactly what it wants to be. The elements sometimes clash: general disorder ruins the bits, or the bits dilute an otherwise intriguing human portrait, or the desire to find a guest prevents Hersch and Michaan from just letting their personalities carry the momentum forward. It can be hard to know whether I’m in the mood for it, because in any given episode, it’s hard to know what “it” is.

But that’s how chaos works. The solution might be editing—but that might also come at the cost of a substantial part of the show’s identity. Short of that, you take it all as it comes. Just know that if you’re willing to endure some low points, you will be rewarded with some awfully compelling entertainment—but outside.

Jordan Call is a writer based in the D.C. area. You can see his other work and contact him at jordan-call.com.