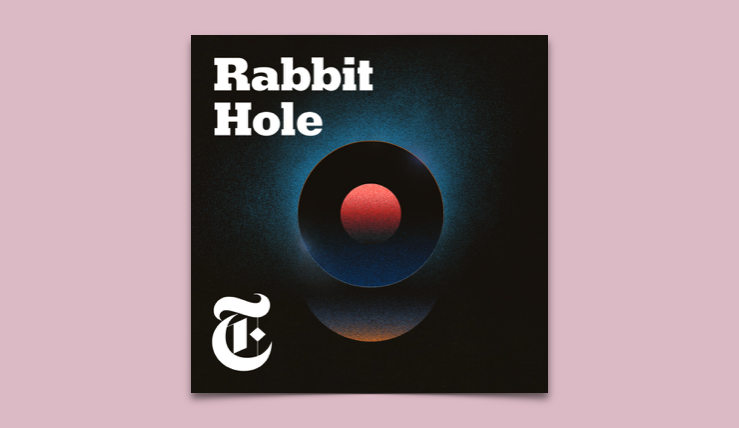 In the prologue to Rabbit Hole, the new podcast from the New York Times, we hear a story about a man who can’t tell the difference between his own views and the ones he’s seen expressed on the internet. The story is unsettling, but not because it’s unexpected. It’s unsettling, rather, because of how normal this phenomenon has become. We live in a world where so many of our thoughts are dictated by the colors on our screens. Our minds are plugged into computers like characters in The Matrix (another work replete with Lewis Carroll-inspired imagery, and also one that has influenced the digital lingo of the alt-right), but without the ability to leave. Since COVID-19 forced many of us to move almost all of our contact with other people online, we are now, more than ever, subject to the whims of algorithmic life.

According to Rabbit Hole, the internet is “profoundly changing who we are.” Using YouTube as a case study, the podcast works to reveal how some of the changes work on us. The first three episodes are about a young man named Caleb Cain who was radicalized by conservative internet videos. As reported on in a multimedia New York Times article by Rabbit Hole’s host, Kevin Roose, Cain gave the Times access to four years of his YouTube watch history so they could trace his journey from mild Obama supporter to believer in racist far-right conspiracies.

One of the major forces responsible for Cain’s radicalization, Rabbit Hole argues, is the way YouTube’s recommendation algorithm works, doing its best to keep people on their site as long as possible. We hear from YouTube CEO Susan Wojcicki about how the company is trying to stop the spread of misinformation, and we also hear a former engineer for the site who realized one day that the algorithm he helped develop had unintended consequences. In addition to making us more knowledgeable consumers of digital media, their stories remind us that even the people who built YouTube cannot fully control what it does, nor can they predict how their algorithms will change people’s lives.

But as informative as the show can be, at times Rabbit Hole progresses unevenly. The stories offered in the series won’t surprise every listener, and the tape they choose can feel flat. The show likes to slot in moments of raw reportage, like the idle chitchat before an interview, and those inclusions don’t always add to the narrative.

When episodes are well-trimmed, Rabbit Hole uses its entertaining subject matter to keep listeners engaged while telling the kind of stories that more people in the 21st century need to hear. Online culture moves fast and major events can be hard to follow. One of the strengths of Rabbit Hole is that it breaks down some of that digital history. Moments in the podcast like a crash course on Gamergate offer a new cultural literacy to those who aren’t “very online.” And on episode five, the best of the series thus far, Roose traces the rise of PewDiePie, the so-called emperor of YouTube, and all the controversies that accompanied his ascension. The Rabbit Hole team adheres to a journalistic neutrality for much of the episode, and avoids heavy-handed editorializing. The result is a complex portrait of a man who wields digital power through shock-value, and who doesn’t quite know how to handle that power because no one else has wielded it before.

Another strength of Rabbit Hole is its music and sound design. We hear dreamlike snippets of old YouTube videos, and episodes that open with clips from a 90’s educational video for kids about the internet. Those sound bites add to the Wonderland atmosphere of the show, allowing us to jadedly remember the awe of discovering the worldwide web for the first time.

Like the internet itself, the podcast frequently induces an unmoored feeling of floating through an endless sea. Besides sound design, one way this feeling is created is through the show’s unusual lack of a structured introduction. We are only introduced to our host and the rest of the team via recordings of their conversations with each other. There is no intro sequence, no “I am your host, Kevin Roose, this is Rabbit Hole.” While the decision to give the show this drifting quality seems intentional, and has a unique effect, it also makes it harder to connect with the Rabbit Hole team, and at times it is hard to keep track of who is who.

That lack of connection spills into the interviews too, many of which were also used for print stories. The interview with PewDiePie, for example, is echoey and doesn’t reach an emotional tenor that justifies having a whole episode of buildup. There are few moments of intimacy in the show, and they don’t come from the words of the interviewees themselves. They come instead from listening to what the interviewees have posted and watched online. The New York Times team expresses how intrusive it feels, for instance, when they find songs from Frozen in Cain’s YouTube history. It’s not the normal, soul-baring intimacy that we are accustomed to hearing in a podcast. It’s intimacy of a colder, more detached variety.

And maybe that’s what we should expect from Rabbit Hole. It is, after all, the only kind of intimacy that a computer screen can offer. The pixels and sound waves are there to represent a real person, but the image is flattened and the voice distorted. You get a sense that something is missing, but you can’t quite put your finger on what.