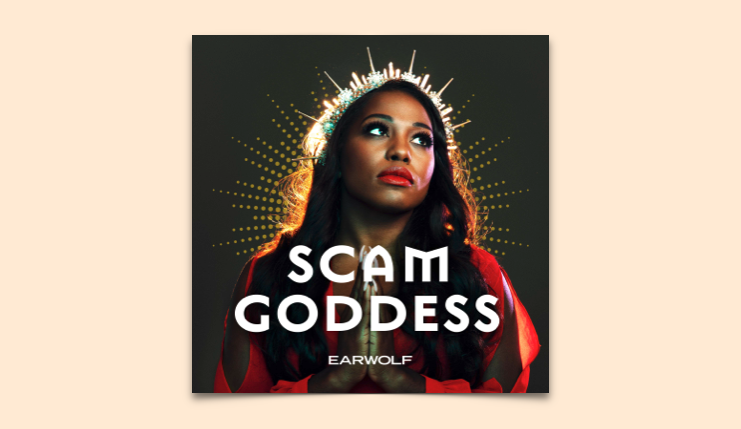 “I was raised from adolescence to this fragile, frantic, unstable adulthood on a relentless demonstration that scamming pays,” writes Jia Tolentino in “The Story of a Generation in Seven Scams.” The essay, a standout from her 2019 collection Trick Mirror, is a sober examination of how cons and con artists impact and are impacted by American culture. It doesn’t try to provide solutions or include many jokes, so it may come as a surprise that Tolentino’s essay shares more than a few strands of DNA with Scam Goddess, one of the newest additions to Earwolf’s lineup of comedy podcasts.

Hosted by actress Laci Mosley and a weekly guest, Scam Goddess won its way into my heart with its breezy, irreverent tone and gleeful cynicism. Mosley, the titular goddess, is fascinated by the frauds and fraudsters she covers each week, but it would be a mistake to say Scam Goddess celebrates swindlers. Looked at from a certain angle, the podcast operates from a perspective nearly as grim as Tolentino’s. Again and again, the episodes show that in a society built on classism, racism, and bureaucracy, scamming is a viable and legitimate way to transform your life, gain acceptance, or just get by.

In the cases Scam Goddess features, Ocean’s Eleven-style antics and sympathetic motivations don’t feature nearly as much as quotidian pettiness and greed. There’s not much to admire in these men and women, unless it’s their dogged determination to scrape together some form of legitimacy in a broken system. In “The Fruitcake Funneler,” covering Sandy Jenkins’s embezzlement of the Texas-based Collin Street Bakery, Mosley and her guests pinpoint the overweening aspirations and frankly impressive chutzpah that allowed Jenkins to succeed in stealing millions of dollars from his employers and living the luxurious life he craved — at least for a while.

Working in the small but intensely class-conscious town of Corsicana, Texas, Jenkins is a “regular, degular, schemgular” man who “needs something” beyond the middle-class respectability his position as accountant at the bakery provides him. He longs for the finer things in life and to be accepted by Corsicana “high society,” which, in Mosley’s telling, consists almost entirely of back-stabbing gossip and country club snobbery. By spending millions of dollars of the bakery’s money on office décor, luxury cars, and horsehair mattresses, among other essentials, Jenkins is able to win a place for himself and his wife in Corsicana high society, until it all comes unceremoniously crashing down, ending in Jenkins lugging trash bags filled with jewels and gold bars to a public lake for disposal.

Mosley transforms Jenkins’s pretensions and conniving into a quest for identity that sees him briefly succeed in wooing Corsicana society and creating the life he desires. By surrounding himself and his family with status symbols, he inadvertently exposes the hollowness of that society and its prestige. To quote Tolentino again, Jenkins is a scammer who discovers that “the path to stability might be a personal brand,” regardless of whether the funds backing that brand are legitimate or stolen. Mockery of both scammers and those they scam runs throughout Scam Goddess, demonstrating that, while embezzlers and con men are far from glamorous, the systems they defraud are hardly innocent victims.

In this climate of distrust and greed, it may be better to be part of the Con-gregation, as Mosley dubs her fans — to be acutely aware of the unscrupulousness of society and to mask it with humor. Despite its light touch, Scam Goddess demonstrates that cons are built into the fabric of modern life and that everyone, to one extent or another, has been scammed. Laughter is one way to deal with a state of affairs that can otherwise unsettle, as demonstrated in “The Ukrainian Adoption Switcheroo.”

The funniest and darkest of the podcast’s lineup, this episode discusses the ongoing case of Natalia Grace Barnett, an orphan with dwarfism whose adoptive parents claim she is, in fact, a mentally-disturbed adult masquerading as a child. Under the quips about Natalia demanding to have Big Little Lies and Sharp Objects for bedtime stories, listeners can sense a real anxiety about the dubious nature of the Barnett’s claims. “So either the parents are fucked up and left this child,” says Mosely, before trailing off. Jacquis Neal, her guest, is blunter: “These people are terrible.”

It may be easier to deal with these unpleasant possibilities through humor, but Scam Goddess is not an escapist show. Mosley is not interested in preserving the reputations of anyone involved in the frauds she covers. We want to believe that we live in a fair society that values hard work and punishes the dishonest. Being able to laugh at the missteps this blind faith leads to brings us one step closer to realizing that nothing could be further from the truth.