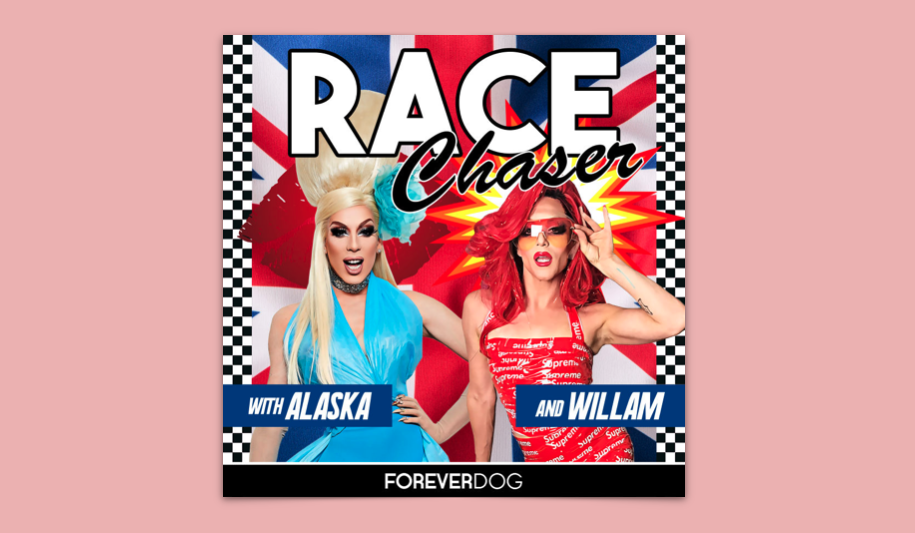 Race Chaser chronicles the herstory of Rupaul’s Drag Race. Hosted by Alaska Thunderfuck and Willam Belli, the podcast features the two former contestants of the influential reality TV show as they react to Rupaul on an episode-by-episode basis, spilling insider tea, roasting questionable fashion choices, and requesting dick pics in their Instagram DMs. As true Ru girls, both Alaska and Willam have released music, and Alaska entrepreneurially uses one of her own songs for the podcast’s opening music, the aptly titled “Race Chaser” from her Poundcake album.

What even is a race chaser? The title cheekily references drag queen fetishization, specifically when that fetish is mixed with the celebrity worship directed at some of the contestants on Rupaul’s Drag Race. (While a diverse group of queens are represented on TV show, the most rabid idolizing often seems to be aimed at thin queens and white queens.)

In the podcast’s premiere episode, Alaska says, “This podcast is a celebration…of the phenomenon that is Rupaul’s Drag Race.” Willam adds, “It’s a love letter.” The podcast has already covered season 1, 2, 3, 11, and All Stars 4. Currently, Alaska and Willam are reacting to the brand-new Rupaul’s Drag Race UK franchise, which features queens with names like Baga Chipz, Cheryl Hole, and Vinegar Strokes.

As a podcast created with Drag Race fanatics in mind, Race Chaser brings in fan-favorite contestants, like Tammie Brown and Tatianna, for “tidbit” segments that sometimes help contextualize iconic Drag Race moments. For example, Tatianna provides context for the scandalous moment in season 2 when she called Tyra Sanchez, the eventual winner of that season, “a complete bitch” during a tense runway interview. Tatianna says, “I think me saying that had a little bit more to do with…some stuff that wasn’t in the workroom, some stuff that was going on at the hotel. The night before, there was that whole ‘almost’ physical altercation between her and I. It was based on me telling her to not sing ‘Halo’ [by Beyoncé] anymore.”

Following the trend of podcasts searching for revenue streams beyond advertising, Alaska and Willam have performed multiple Race Chaser live events. From a marketing perspective, the live shows are a brilliant idea. These experiential episodes provide entertainment value to the listeners who are able to attend, while boosting positive brand perception and selling lucrative merchandise to excited fans.

Willam, who is open about doing sex work in the past and has butt chugged champagne on stage, and Alaska, who once performed a lip-sync to Whitney Houston’s “I Will Always Love You” where two male dancers in pig masks released streams of piss onto her face during the climax, may not be the most likely pair to host a podcast selling commercial spots for online counseling, natural deodorant, and meal delivery services. Rupaul’s queer capitalist vision for drag, with her mastery of marketing and ardent self-branding, transformed contemporary, American drag from an underground subculture to an advertising vehicle for brands like McDonalds and Starbucks to increase their clout with LGBTQ consumers. Mother Ru views drag empowerment as a series of carefully curated self-branding moves that enable crafty queens to capitalize on and grow their fan base.

While I am thoroughly entertained by Alaska and William’s breezy chemistry and podcasting skills, I wonder at times while listening to the show if the marriage between drag and self-branding will be a permanent matrimony, officiated by Rupaul. If a person dons drag and passes through the gendered abyss, can they emerge without coupling their fluid identity to a monetization plan?