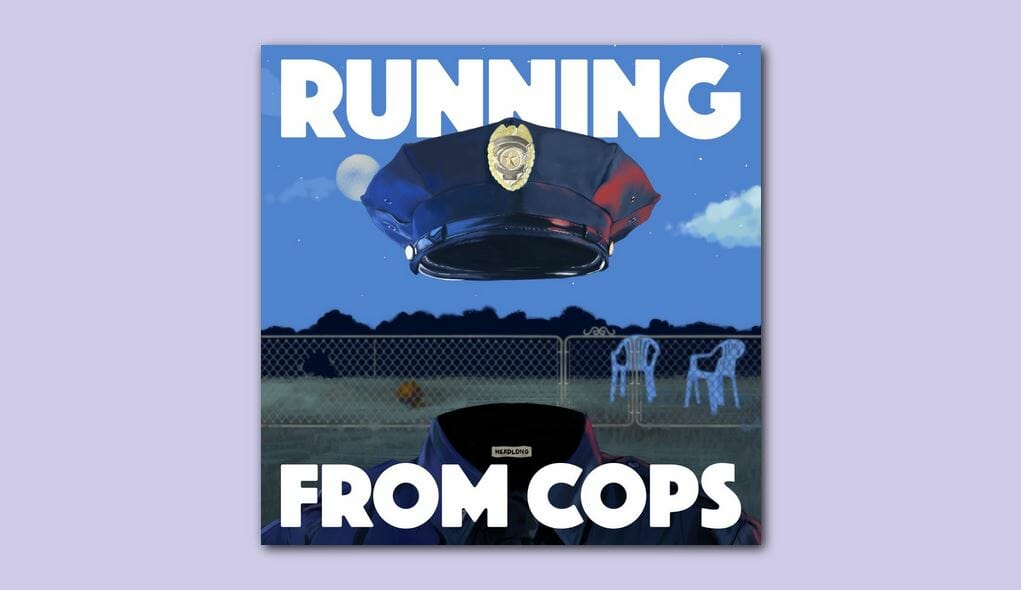 On an unfortunate night in 2013, a teenage couple stood outside their parked car in an empty lot as officer Paul Tremblay finagled with something in the trunk of his cruiser. The scene was being recorded for the TV show Cops, and as the officer came around his car he showed the cameraman a little plastic packet, the inside of which had turned pink. “And that would be cocaine,” he said, before arresting the young and very confused couple for drug possession, a crime they adamantly denied committing.

This clip, along with thousands of others like it, form the content for Cops, the reality show that follows police officers all over the country and documents their interactions with ordinary people.

In his podcast Running From Cops, Dan Taberski examines the rise of what has become the longest-running reality TV show, talking with its creators, officers who appeared on the show, and media critics to understand where it came from and why its stuck around for so long. He also attempts to unveil just how real the televised interactions are by talking with people who had been arrested on the show. Like his previous shows in the Headlong series, about the fitness guru Richard Simmons and the Y2K panic, Running From Cops aims to break down a piece of popular history to reveal what really is and isn’t behind it.

For anyone not familiar with Cops, the show’s premise is to document the everyday work of beat cops out on patrol. That’s how its creator, John Langley, describes it to Taberski: as a form of documentary television. However, by choosing only to air the most exciting and dangerous moments of the job — drug busts, high-speed chases, and domestic disputes — the show presents a selective and possibly misleading version of police work.

The main issue Taberski takes with Cops is one common to just about all reality TV: that it’s an exaggeration but won’t admit it. But Taberski is also a fan of the show. Before starting on this podcast, for which he and his producers collectively watched over 800 episodes and jotted down some 60,000 data points, Taberski estimates he’d already seen hundreds of episodes. So his entry point for digging beneath the brutal montages of stand offs, arrests, and cuss-laden pursuits is to understand, as both a moral human and someone who has enjoyed watching the show, everything that goes on when Cops is filming.

As Taberski discovers, the presence of a film crew and the opportunity to appear on national TV can change both how police officers process citizens and who they decide to investigate.

Each Cops episode consists of three segments, and to keep viewers entertained, the show doesn’t include any mundane policing duties like guiding traffic, sitting through court hearings, or waiting through a night shift. Instead, they’re packed with teenagers getting busted with drugs, drunk people screaming outside their houses, and anything to give a cop a reason to yell, “Freeze!”

The likelihood of seeing an arrest in any given Cops segment has risen over the years, from 61% in 1990 to 95% in 2018. For Taberski, the choice to air almost exclusively confrontational arrest footage means distorting the worldviews of young, susceptible viewers. He brilliantly codifies this predicament by sharing audio clips of young children playing Cops on YouTube. The internalized power dynamics and casual aggression are unsettling even to pessimistic listeners, and would seem to be damming PR for any police department.

The racial demographics of officers and their arrestees were also for a time heavily skewed to a stereotypical white versus black dichotomy, leading the NAACP to file a complaint with the Fox network. Although producers responded by telling camera crews to find more white suspects, which sounds like substituting one problem for another, other biases remain. The show overwhelmingly targets low-income areas and low-level drug offenders. Today, about 44% of arrests are for low-level drug offenses, presenting a world in which these cases are, if not the most imminent danger to society, at least the most common.

When Taberski speculates with New York Times critic Wesley Morris about what the intended impact might be of police departments working together with Cops to hammer in such a narrow, oversimplified view of police work, they essentially boil it down to fearmongering. Morris, who is black, remembers watching black people get arrested by white officers on Cops as a kid and says, “I just saw this show and was like, I don’t want the police anywhere near me.”

The effects of being arrested on national television also never really leave a person. In interviews with people who had gone through this experience on Cops, Taberski hears how these appearances follow people around for years, long after any punishments they may have served for their crimes. What would have otherwise been one bad night to put behind themselves becomes a syndicated TV clip that the world and often their neighbors permanently views them through.

But for Taberski, the more dire problem worth addressing with Cops is whether the televised nature places trashy entertainment above due process. Or as he posits, whether “Cops and the police they follow are creating the reality that they say they’re documenting.”

Before anyone arrested on Cops can legally appear on the show, they must sign a release, agreeing to let their misfortune become someone’s entertainment. It doesn’t seem like something anyone would agree to, but most times they do. And in listening to stories from people who have appeared on the show, Taberski learns that the officers and producers often work together to pressure people into signing, in some cases suggesting that the criminal processing will go more smoothly if suspects play along.

At the end of the show, Taberski reveals the Holy Grail for reality TV debunking: an original, unedited tape of an arrest before it appeared on Cops. It’s of the segment at the beginning of this review, and it shows a longer and much different story than the pithy version that aired, proving not only that the show doesn’t always present police interactions exactly as they happen, but more importantly that the presence of camera crews can compromise how officers decide to do their jobs.

The question that bobs to the surface throughout Running From Cops is what the cops get out of being on the show. They aren’t paid, and although they have full discretion over what makes it to air, they either rarely exercise that option or more alarmingly, they do, but choose to show their world as one in which nearly every interaction ends in an arrest and poor people are constantly being targeted by officers who are eager to put on a good show for the citizens at home.

The one tangible benefit Cops has brought to some police departments is improved recruitment. But at what cost and to what end? Heightening the drama of police altercations doesn’t help anyone better understand life in either the front or back seat of a cop car.

Yes, Cops is just one lens to view the front lines of the U.S. law enforcement system through, but for Taberski, it’s one that’s cruel and sad. That the show has been on TV for 30 years and inspired imitators along the way — one of which, Live PD, consistently pulls in high ratings in 2019 — is itself a sorry reflection of what’s valued as entertainment.