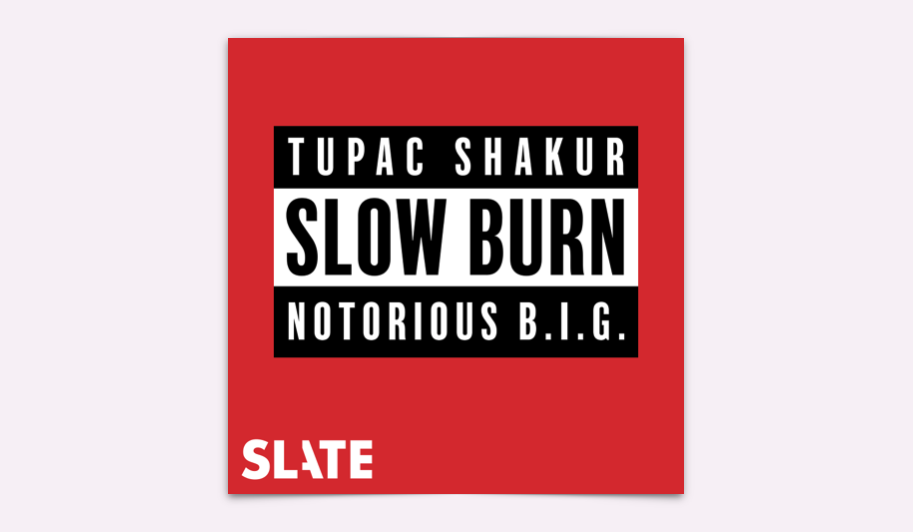 The departure of Slow Burn’s original team left Slate with some decisions to make. The podcast’s back-to-back retellings of the Nixon and Clinton impeachments, hosted by Leon Neyfakh and produced by Andrew Parsons and Madeline Kaplan, turned the show into a critically-admired hit. Ahead of Season 3, not only was Slow Burn in need of a new leading voice, but it was quickly running out of presidential ousting-attempts. Slate ultimately chose Buzzfeed and ESPN veteran Joel Anderson as its captain, and steered the show away from political scandal and toward the murders of Tupac Shakur and Biggie Smalls, still unsolved two decades after the fact.

The show remains good. Its central mission is still the untangling of history, and more specifically the separation of fact from dominant narrative. The dominant narrative in this case is the East Coast vs. West Coast rap feud, which has become the baseline cultural explanation for why Tupac and Biggie were both murdered. Anderson takes us through the ‘90s rather linearly, pointing out the disputes between Tupac and Biggie, Suge and Puffy, Death Row and Bad Boy that all get conflated in the collective imagination into a simple rivalry between Los Angeles and New York. Slow Burn does not seek to solve the killings or identify a central motivation, but to rediscover the threads that made the stardoms of Tupac and Biggie so tumultuous.

The moment is ripe for a definitive history of the Tupac-Biggie beef. Two decades later, the many incidents that preceded the killings have largely escaped popular memory. Slow Burn’s great advantage is having the time and space to evaluate each of the escalations in Tupac and Biggie’s relationship, rather than pick a single turning point.

Popular music is a different canvas than politics. In political histories, there’s an expectation that the facts be frontloaded, and that any analysis the author wishes to insert should live on the margins. In this story, where arts and criminal reporting intersect, it’s as important to contextualize the music of Tupac and Biggie as it is to set up the basic facts of the case. And given the animosity between the two men and the unsolved nature of their deaths, separating their art and star power from their murders is impossible. Anderson knows this, and spends much of the podcast world-building, finding the characters, publications, and news items that gave such weight to Tupac and Biggie’s every move.

The 1990s were a time when people were eager to give rap lyrics a massive amount of social responsibility. Anderson dedicates an episode to the ugly history of gangster rap lyrics being used as a criminal defense in murder trials, and another to C. Dolores Tucker, the civil rights activist who spent the decade denouncing gangster rap as a plot to destroy young black people. Lyrics weren’t just used as a weapon of socially-conservative ill-will, but also regularly as escalators of animosity between rappers themselves. Though Tupac and Biggie did explicitly provoke each other in their lyrics, the general tension between the two coasts allowed nearly any of their writing to be read as a threat. Tupac and Biggie were working in an environment where any move could be interpreted as an attack.

Slow Burn devotes more time to Tupac than Biggie. The show doesn’t have a choice: Tupac is the one who survived a shooting, became the focal point of the national conversation on “violent lyrics,” went to prison for sexual assault, and accused Biggie of being involved in the shooting. Wisely, the podcast chooses not to rationalize Tupac’s actions, but to present the good beside the bad, and give a sense of the variety of troubles Tupac encountered in the years before his death.

That decision is key to the success of Slow Burn’s third season — it keeps some distance from its protagonists. We hear from close friends, we hear archived interviews of both men explaining themselves, and we hear the music, but the show is not a profile of Tupac and Biggie. The question here is what exactly happened to hip hop’s two biggest stars over the course of a couple years in the mid-90s to lead to tragedy. In this way it’s spiritually aligned with Karina Longworth’s excellent movie history podcast, You Must Remember This, which offers entire cultural histories without trying to draw conclusions about the personalities and motivations of people long dead.

The work Slow Burn does to clearly document the Tupac-Biggie relationship makes for an admirable piece of reporting. Season 3 proves that the Slow Burn method, of using the distance of a couple decades to reconsider and reorganize recent history, is amenable, and capable of much more than revisiting the White House.

Editor’s note: An earlier version of this review suggested that Slow Burn’s production team, aside from host Leon Neyfakh, remained intact between seasons 2 and 3. After Season 2, executive producer Andrew Parsons and producer Madeline Kaplan left the show as well.