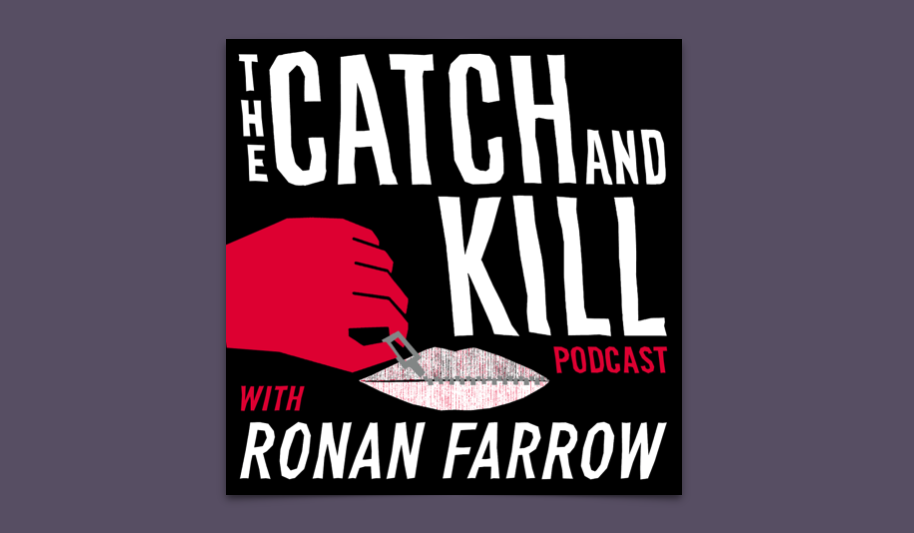 For the past two years, the Pulitzer Prize-winning journalist Ronan Farrow has been following a trail of clues from his investigation of Harvey Weinstein to other blockbuster stories about the systems that protect powerful men accused of terrible crimes in Hollywood, Washington, and beyond.

Of course, he didn’t bring that information to light on his own. A compelling cast of sources — from brave whistleblowers to undercover operatives — decided the fate of these investigations, sometimes (and often) risking everything in the process. The new Catch and Kill podcast — the companion to Farrow’s bestselling book of the same name — brings us their stories, in their own words, for the first time.

Farrow recently told The Guardian that the idea for the podcast came early in the reporting process when he and then-NBC News producer Rich McHugh were working on the Weinstein story for the network. “We recorded hours of our conversations in real time as the story was getting killed by our network executives,” Farrow said. “And you can hear the real moments about reacting to those pieces of news and how we reacted in the moment.” (For their part, NBC has released a lengthy rebuttal.)

From the first moments of Catch and Kill’s first episode, Farrow’s talent for the medium is clear. It doesn’t hurt that in addition to his sharp reporting skills, he’s just as handsome on tape as he is in person. Farrow also voiced the audio version of his book, so listeners might already be keen on an opportunity to hear more directly from the source — and he delivers with what amounts to a play-by-play of some of the critical tests of both his own faith in himself and that of others.

But while Farrow’s discussion with Igor Ostrovskiy — a private investigator contracted to surveil him on behalf of Weinstein in 2017 — left me both deeply disturbed and in awe of a single individual’s incredible resolve to say “enough,” it’s on the second episode that the Catch and Kill podcast finds its rhythm and its voice.

The episode sheds light on an oft-forgotten element of sexual harassment in the workplace, or any kind of discrimination for that matter, gender or otherwise: the importance of bystanders speaking up. As he tries to understand how the veteran television news producer was willing to leave NBC News over what Farrow calls “corporate cowardice,” he asks McHugh: “What makes you different? Why did you feel it was your responsibility to do the right thing?”

His answer? “The women.”

“From the moment I heard [Rose McGowan] tell her story to us, there was a tremendous responsibility we shared to move the ball forward,” McHugh explained, “because they risked a hell of a lot.”

By the next episode, we get to hear the voice of Ambra Guttierez, the model who, at 22-years-old, helped blow the Weinstein case wide open in 2015. She agreed to participate in a police sting operation at a Tribeca bar that was designed to extract a confession from the movie executive. Guttierez was unwavering in her courage to confront the person who she said just a day before had assaulted her. What followed was a multi-year saga that pitted her against powerful interests in Hollywood and law enforcement that seemed to want her evidence buried. It’s 38 powerful minutes of podcasting that puts into perspective how precarious these acts were and continue to be.

Since the Weinstein story first broke in October 2017 — in a powerful report by Jodi Kantor and Megan Twohey in The New York Times, which earned them the Pulitzer Prize alongside Farrow — a reported 87 women have come forward with allegations of sexual harassment or sexual assault. Weinstein has denied that any sexual contact was nonconsensual.

“I come away from both the book and the podcast feeling that the fight for the free flow of information about these topics is only just beginning,” Farrow told The Guardian, adding, “but also feeling very galvanized and optimistic because these sources that you will get to know if you listen to this podcast, show absolutely no signs of backing down or shutting up.”

Ironically, it’s perhaps the intimacy of the medium — whether real or imagined — that makes it hard to ignore. That means the possibilities today are endless for other investigative reporters, survivors, and advocates to have a voice. Let’s use it wisely. Let’s use it bravely — as Farrow and those around him have fought to do on behalf of all of us.

Kristin Marguerite Doidge is a writer and lecturer at Loyola Marymount University whose work has appeared in Fortune, Marie Claire, The Atlantic, and on NPR. Her forthcoming book, Nora Ephron: A Life, will be published by Chicago Review Press in Spring 2021. She holds a master’s degree from the University of Southern California’s Annenberg School of Journalism and she was a 2018/2019 LARB/USC Publishing Workshop & Incubator Fellow. Connect with her on Twitter @KMarguerite_USC.