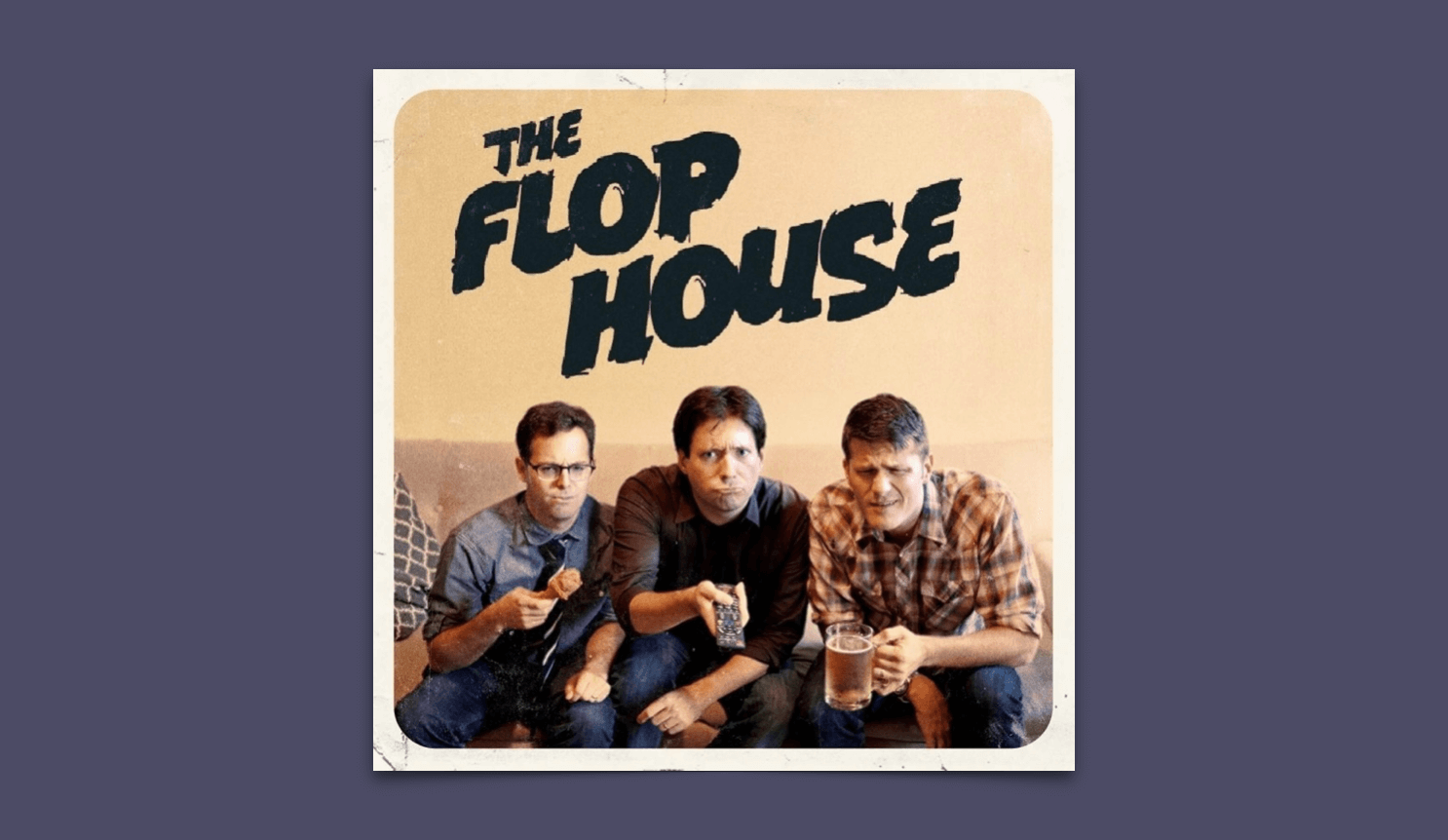 Before Serial, before WTF with Marc Maron, and before Stuff You Should Know, there was one podcast that dared to…be created before those shows made podcasting a big deal.

The Flop House, the original “bad movie” podcast, has been around since 2007, long before podcasting’s full potential had been realized, and as such, began humbly as a chat-cast with a loose format and little pomp. Hosted by three friends — Dan McCoy (The Daily Show), Elliott Kalan (Mystery Science Theatre 3000), and Stuart Wellington (owner of NYC’s Hinterlands Bar) — it’s the show that watches bad films so you don’t have to.

The every-other-week podcast always follows the same format: a lengthy description of the film under review (one that was either critically-panned or a box office flop), a final judgement (“good-bad,” “bad-bad,” or “actually kind of liked it”), a “Letters from Listeners” segment, and finally, recommendations on movies to check out instead of the one they watched (or, on rare occasions, alongside the one they watched). The show is checkered by irregular bits, such as Elliott’s improvisational Letters songs, Stuart’s not understanding the ending of 2008’s Mirrors, or Dan’s mispronouncing words.

The three hosts are hilarious and share great chemistry. Stuart is cool and easygoing; Elliott is high-energy; Dan is self-deprecating and oft-beleaguered by his co-hosts. Across their 300+ episodes, they’ve invited guests like Jamelle Bouie, Gillian Flynn, Zhubin Parang, and Hallie Haglund to help them cover bad movies, often lending a bit of outside experience or simply to inject a breath of fresh air. Lately, they’ve added a bonus episode for their off-weeks, either inviting a guest host back to speak on a specific topic or devoting it to an extended bit, like Elliott’s impression of Tom Brokaw giving his thoughts on Frank Herbert’s Dune.

The Flop House’s hosts are, more than anything, enthusiasts. They are driven to make this podcast because they love bad movies, and love discussing what makes them awful. At times, they can get philosophical about what is so misguided about the movie (their episode on Bright is a great example of this), or they can make joke after joke about the film’s many ridiculous special effects, casting choices, and pacing (their Cats episode covers all of that).

And although the show is led by three white guys, each makes time to check his own privilege, and they invite guest hosts to add needed voices into their reviews. Their recommendations at the end of each episode, as well, often reach outside of the mainstream, outside of typical listener’s tastes, and range from rare gems to endorsements of blockbusters that movie buffs may have dismissed at first glance. McCoy, Kalan, and Wellington tend to have very distinct tastes, as well, so listeners can align themselves with their recommendations week-to-week (a devoted fan even made a Wiki to catalog their recommendations).

The Flop House is set apart from its competition — podcasts like How Did This Get Made? and We Hate Movies — by acknowledging that to rag on crappy movies is a bit played out. By allowing themselves to enjoy the movies they watch, they move past pretension and accept mediocrity for what it is: a way to kill 90 minutes. Most importantly, they always leave the door open to re-evaluating and liking the movies they review. One man’s trash is another man’s treasure, and every bad movie has at least some redeeming value.