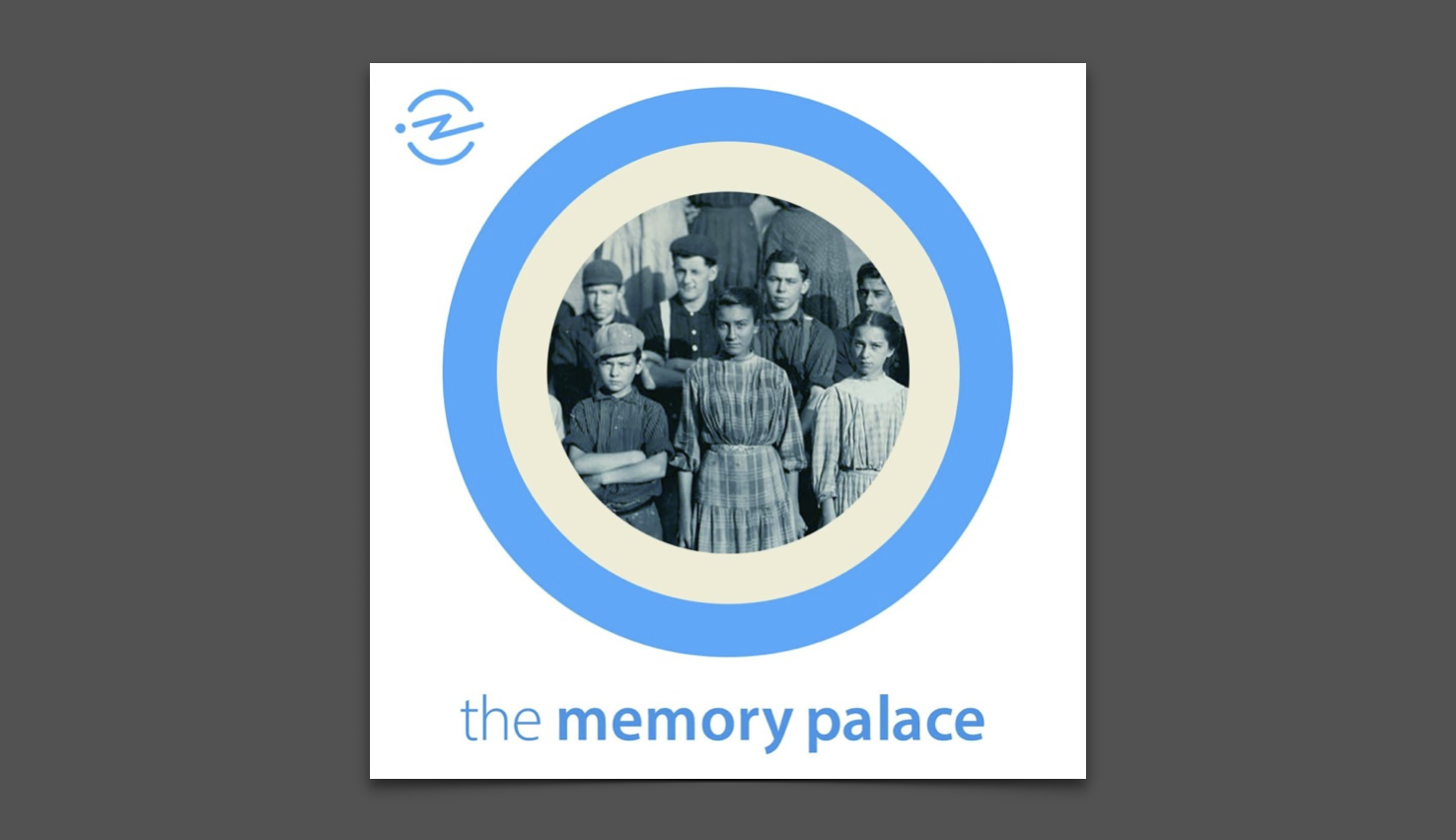 While historical discourse often lands on the “why” of watershed moments, The Memory Palace is more concerned with the “who, what, when, and where” of lesser-known histories. In remarkably concise episodes, ranging from about 5 to 20 minutes (with a handful even hovering near the 1-minute mark), the show gets at the heart of what makes history interesting: at its core, it is a collection of intertwining stories, passed down and kept alive by the people those stories shaped, and who will in turn shape the lives of those who follow. Favoring an emotional over a cerebral mode of storytelling, The Memory Palace steers clear of scholarly interpretation to instead make room for a sensory understanding of history that momentarily transports listeners into the past.

Unlike podcasts that develop a single story over the course of a season, Nate DiMeo’s The Memory Palace is a collection of stories each contained within one episode, leaving the option to stream them in whatever order you please. In fact, the podcast’s website greets visitors with a friendly, conversational disclaimer that actively encourages new listeners to “start wherever you’d like,” while just beneath is a button that reads “Play a Random Episode.” This setup suggests that history need not always be engaged with chronologically to be meaningful and illuminating.

Each episode of the podcast is first situated within a narrative framework before a historical one. For DiMeo, the sensory precedes the factual. In episode 139, titled “1,347 Birds,” he recounts how two researchers in recent years studied bird specimens dating back to the late-19th century as an indicator of atmospheric black carbon levels in the United States. Before explaining any of that, though, DiMeo begins with a gloomy description of the specimens in question: “1,347 birds in drawers in boxes, dead and labeled with paper ID tags tied to their thin ankles.” The research article that inspired this episode is a far cry from DiMeo’s philosophical interpretation of it. When I read the article myself, out of curiosity, I realized that DiMeo’s observations are largely driven by the images he saw there. While the article does indicate concern for current environmental conditions, the tone of it is measured, and though DiMeo is similarly thoughtful in his telling of the birds and their sooty plumage, his version is rather effusive, instead driven by the immediacy of the images. “The radiant yellow of a male Lark,” he says of one specimen, is “now hidden by black carbon particles produced during one particular year by the incomplete combustion of the coal that fueled the American industrial economy during its dramatic rise in a relative handful of short decades.” Having read the article, I know how much detail DiMeo trimmed from his story. On the other hand, having listened to this episode, I was immediately able to register the emotional urgency the research article was missing.

Within the world of The Memory Palace, the importance of the past often lies in the humanity of the people who lived it. Each story told becomes legible through the mundane, bodily experiences of its participants. In episode 81, “Below, from Above,” DiMeo recounts the monumental construction of the Brooklyn Bridge, and of what it was like for the men who built it. We learn that the workers needed to be acclimated before descending into the unnatural, punishing conditions of the caisson, the watertight, pressurized chamber that allowed for underwater construction and the excavation of the bridge’s foundation. At this point in the episode, the music pivots, crescendoing in a shriek of anxious strings as DiMeo begins to describe the agonizing, claustrophobic experience of the acclimation chamber:

“In would rush the pressurized air, up from a hole in the floor, and with it the pain. This pressure, this pushing, deep in your ears. Starting fast and pushing hard. It would be excruciating. And then it would slowly release. Though sometimes it wouldn’t, and you would be stuck all day with it in your head.”

In descriptions like this one, DiMeo foregrounds the story he is most interested in telling about the Brooklyn Bridge: not about the marvels of engineering that were required to complete it, but about the grinding, quotidian demands it made of the laborers for 14 years, gradually wearing their bodies down as they built it up. “Think of a man who dug,” DiMeo urges us, when you admire the bridge or walk across it. “Think of those shoulders, and arms, and joints within. Of bursitis and microtears. Fraying tendons, rotator cuffs. No treatment, no insurance.” He asks us to consider not just the logistical feats of completing the bridge, but also the feats of human endurance that it took to withstand those bizarre conditions.

Taken at face value, many episodes of The Memory Palace are eloquent, compelling, and impressively compact accounts of history’s more unexplored moments. They give us a unique opportunity to think deeply about what it was like to be someone else, somewhere else, at some other time, perhaps long before ours. But in his loyal attention to the trees –– so often overlooked –– DiMeo sometimes misses the forest. Drawing conclusions about historical events can be a messy affair, one that entails nuanced and often competing interpretations. It can be maddeningly difficult, and more often than not, there is no single right answer. With such tight time constraints, though, DiMeo can only achieve so much in his conclusions. In episode 173, “10, 9, 8, 7, 6, 5, 4, 3, 2, 1,” DiMeo claims that Thomas Edison, in his dogged efforts to invent the light bulb, “would never rest trying to ensure that we never could.” This comment is pretty, but artificially so; it assigns dubious intention where we don’t know it existed, and so it ultimately registers as pat and a bit melodramatic. Of the episodes I listened to, there were a few remarks like this one that felt too neat, more aesthetic than they were thorough or insightful. Still, the trick of light that creates the sometimes unconvincing illusion of a story’s natural end is the same one that conjures a shimmering, incandescent image of the past, bridging the distance between now and then, and briefly immersing us there.

In the end, The Memory Palace is not history as told in your high-school textbook, nor as told in a peer-reviewed journal, and it would not work if it resembled either. The episodes are informative, yes, but perhaps more important is the artful way in which they are delivered. The stories DiMeo tells are detailed and thoroughly researched, but above all they are beautifully told, which moves us and makes us want to keep listening. This is history as told around a fireplace, or at bedtime. It is the kind of story we don’t want to end, the kind of story that makes us want to learn more, and that is what it does best.