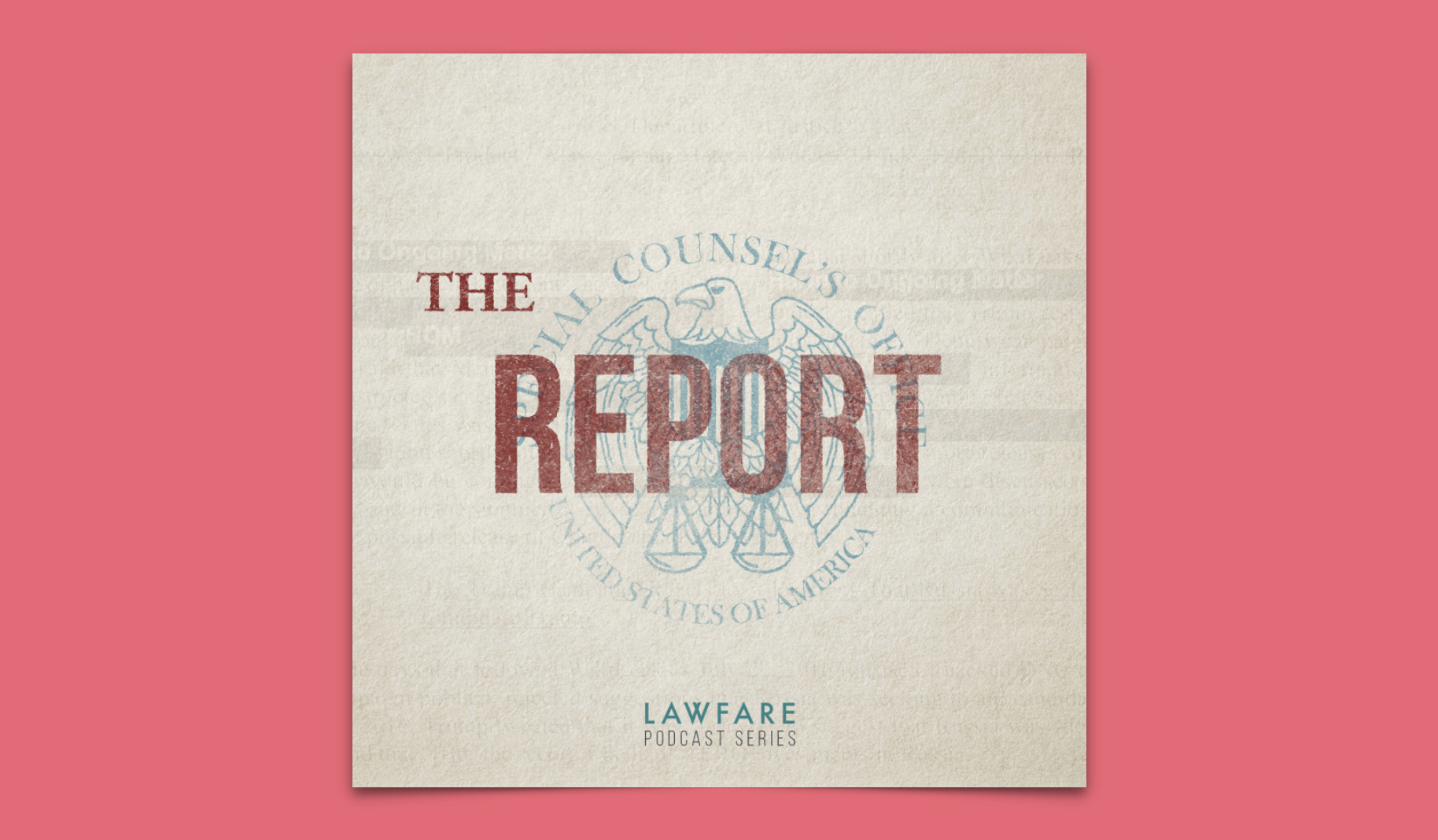 Volume I of The Report attempts one of the most daunting tasks in law, politics, and journalism: to make the Mueller Report digestible, and even interesting. While dry at times, the first seven episodes come as close as they can to meeting that goal.

Susan Hennessey, Lawfare’s Executive Editor, serves as host and narrator throughout the podcast, and Benjamin Wittes, Lawfare’s Editor-in-Chief, reads and paraphrases the report. In the first episode, Hennessey explains that the podcast “tells the story that Mueller does, but in a format that’s a little more manageable.” While not a dramatic reading, the series isn’t a commentary, either—Hennessey warns us that “there won’t be hot takes or political commentary.”

The Report excels in making the storyline of Russian interference and contact with the Trump campaign legible. Hennessey, Wittes, and their guests walk through Russian social media campaigns and hacking of Democratic emails, interactions between the Trump campaign and the Russians, and the particular stories of Trump aides Carter Page, Paul Manafort, and George Papadopoulos. Most episodes follow a loose chronology. Hennessey acts as our guide while experts explain the necessary context and, to a limited degree, the significance of Mueller’s findings.

The Report handles uncertainty especially well, whether it comes from redactions or questions Mueller simply couldn’t answer. In episode 3, which runs into numerous redactions involving hacked emails, The Report uses a scratchy, muffled sound to represent the redactions punctuating Wittes’s readings. After Wittes reads a heavily redacted section, Hennessey captures the frustration by adding, “The whole section is like this—tantalizing details suggesting maybe the next sentence finally tells us, explicitly, what the Trump campaign knew…and then, you run smack into a redaction.” Rather than speculate on what happened, Wittes and Hennessey accept that Mueller has withheld certain information and move on.

The Report is honest, too, when they encounter speculative or unanswered questions. When Hennessey poses the question of how much Trump knew about Russian activity, she says, “The answer is…mostly redacted.” On the subject of Russian social media campaigns, she says, “”Did any of this change the outcome of the US election? We don’t know,” before adding that the effects are impossible to measure. Hennessey’s commitment to admitting—rather than trying to resolve—uncertainty is The Report‘s greatest strength. It demonstrates an academic commitment to presenting the report’s facts and nothing more. This commitment makes The Report a sharp break from nearly all mainstream news coverage of the Mueller investigation.

Hennessey remarks that behind the legalese of Mueller’s report is “one hell of a story”, and she isn’t wrong. The intersection of internet security, illegal and questionably legal conduct by the Trump campaign and the Russians, and Mueller’s fact-finding mission make for a riveting and messy tale. But at times, The Report grows dry, particularly early in the series when it focuses almost entirely on Russian disinformation and hacking efforts. While relevant to the future of American Democracy, these episodes lack the suspense of the episodes focused on Trump and his associates. This isn’t Lawfare’s fault—internet security simply isn’t all that suspenseful—and may be a product of my own preference for stories about Trump’s misdeeds. But the broader issue stems from what The Report tries to do. The best nonfiction podcasts tell stories we don’t already know and successfully dramatize the ones we do. The latter is what Leon Nayfakh did so well in both Slow Burn and Fiasco. The Report is produced by some of the most brilliant legal minds at a leading legal blog housed in one of the world’s most prestigious think tanks. It is an academic endeavor that aims to make a legal document legible, not tell the most dramatic story.

Perhaps as a result of my own political interests and biases, I most appreciated episode 7, which explores Mueller’s charging decisions. It is the only episode with a clear left-of-center bias. Hennessey breaks the potential charges down into five categories, the fifth being the “massive number of lies about everything,” a choice of words much less favorable to Trump than “perjury.” On the question of whether to charge Donald Trump, Jr. with campaign finance crimes, Bob Bauer, President Obama’s former White House Counsel, is the only guest commentator. Bauer suggests that Mueller went too easy on Trump Jr., and his singularity in this part of the episode finally gives the show a leftward tilt.

Hennessey frames episode 7 as an attempt to evaluate Attorney General William Barr’s claim that the report meant “no collusion.” While Hennessey never explicitly answers the question, she takes care to explain that “collusion” is not a legal term, and Mueller investigated only “conspiracy.” The episode ends with Hennessey’s addition, “No one in the Trump campaign engaged in behavior that met the legal standards for a prosecutable crime of conspiracy. Is that really the same as no collusion?” Hennessey lets both Trump and Democrats answer the question. However, after less than 30 seconds of clips of Trump, Pence, and Sarah Huckabee Sanders claiming exoneration, the episode ends with over a minute of Democratic Congressman Adam Schiff’s remarks during Mueller’s Congressional Testimony. So while Hennessey does not specifically address the question of “collusion,” it feels like no accident that she lets Schiff have the final, longer, and more compelling word.

Schiff tells us that Trump, while perhaps not charged, engaged in ridiculous and severe misconduct. Hennessey does not disagree, and after producing the previous seven episodes, how could she? This editorial decision is not kind to Trump, but I am not complaining. (That shouldn’t surprise you—I’m a Democratic strategist myself.) And listeners to a podcast put on by Lawfare, a wing of the Brookings Institution, about the Mueller Report, which Republicans tend to believe is a bunch of rubbish anyways, probably don’t mind either.

For the most part, The Report does simply present the facts and decisions of Mueller’s first volume (Lawfare will begin releasing Volume II of The Report, which explores whether Trump obstructed justice, later in September). It is a tremendous legal podcast, making a litany of dense legal issues understandable to listeners who didn’t suffer through law school. Its clarity and commitment to truth are impressive, yet I worry it will remain stuck in the liberal cocoon of academic podcasting and deep journalistic coverage of the Mueller report. Those who need to hear the hard facts of Mueller’s report—those who believe Trump’s claims of “no collusion” and “exoneration,” claims amplified by the right-wing media—probably won’t listen to The Report. I worry that even outside the right-wing media ecosystem, The Report‘s lack of traditional drama means it will function as little more than an audio reference document. And that problem, combined with the show’s frequently dry approach, means The Report may fail to serve its broader purpose of educating the public on what Mueller found.

Martin Page lives in Jersey City, where he is a digital strategist for a political communications firm.