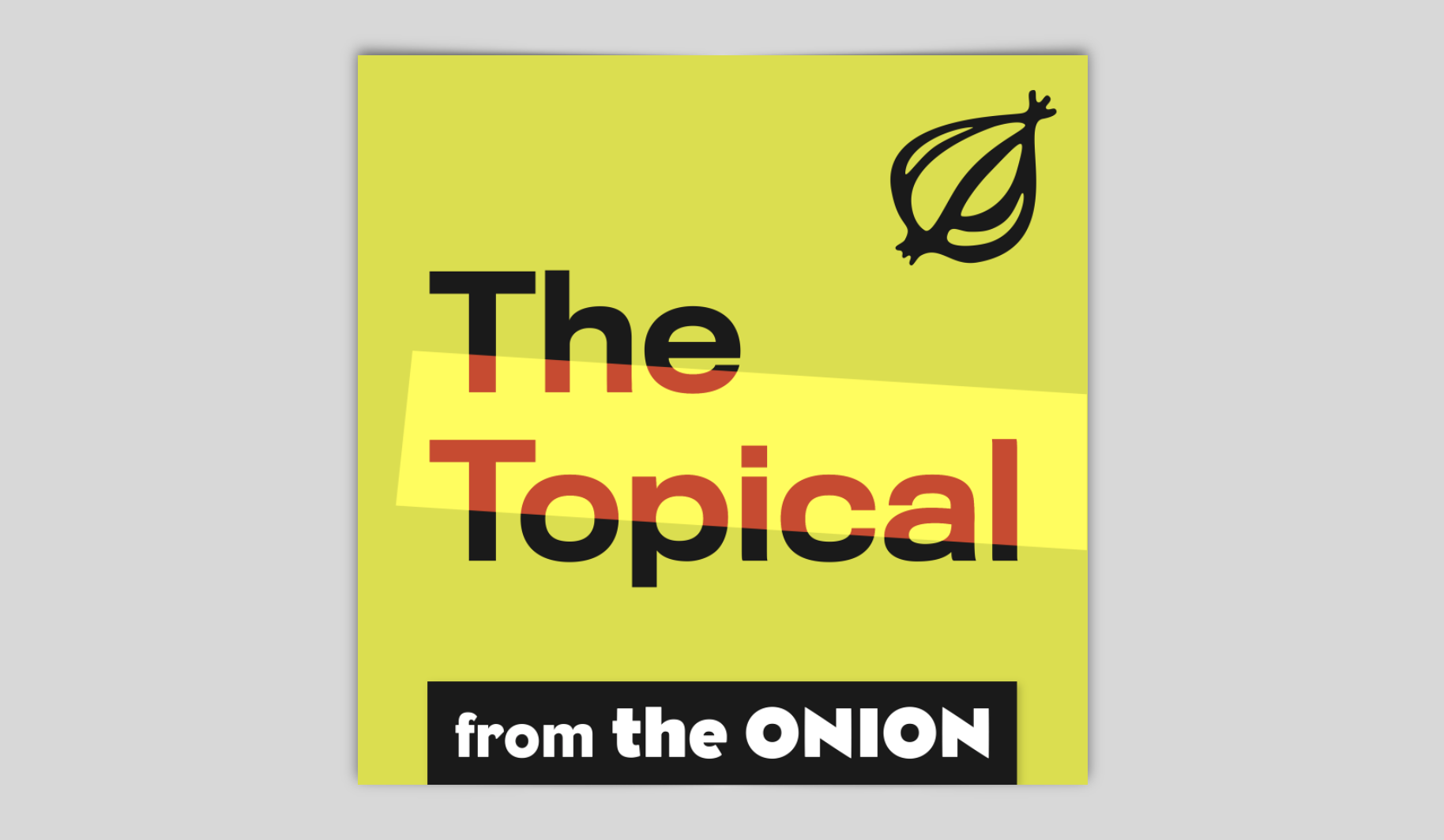 Jokes about taking a break from the news are by now a tired cliché. Up there with jokes about screen time, diet-based personalities, and mansplaining, our collective feeling of defeat upon looking at our news feeds is not exactly novel to make fun of anymore.

But what if you really do want to a break from the news, if only for a few minutes? The Onion has the answer with their new podcast, The Topical. By feeding their signature satirical headlines into a format similar to that of The Daily, The Onion has created a daily comedy podcast that always feels fresh and exciting, no matter how many episodes you listen to.

I wouldn’t recommend replacing your regular news podcasts with The Topical, although there are moments when the show feels uncannily real. Rather, the show works best when you have approximately eight minutes to kill and want to fill it with something funny. Like a snarky Twitter thread or an unexpectedly entertaining YouTube recommendation, The Topical offers brief injections of humor to help you disconnect or just share a smile.

The podcast’s fake stories are separate from those featured on The Onion’s website and social media channels, giving you another lane of satire to consume if you’re a big fan. In its best moments, the show’s headlines hit even harder with a spoken delivery and supporting sound bites, such as in the episode where Tyson Foods tells Trump he can no longer use audio of their animals being slaughtered as background music at his rallies.

And the bliss from hearing the host’s Brian Williams-esque deadpan deliveries of lines like “Join us tomorrow and every day after that until all the news is over and I’m dead,” or “Don’t forget to rate and subscribe…otherwise we’re gonna come to your house and beat the shit out of you,” is unrivaled among today’s comedy podcasts.

With the proliferation of daily news podcasts, I’m surprised a show like The Topical hadn’t come along sooner. A longer daily satire show existed for a few months at the end of 2017, but The Onion seems to be the first outlet taking this idea and running full-steam with it, and I’m glad they are. Experimentation and comedy are hard to execute in the podcast realm. Attempts to do so can easily become too confusing to listen through or too similar to every other triad of close friends cackling away at their own inside jokes, so The Topical is a surprising success.

One other way the show stands out is its creative ad integration. With questionable and occasionally explicit material, there’s often a jarring disconnect between a show’s content and its advertisements. Comedians pausing from making raunchy sex jokes or hosts transitioning from gruesome murder stories to sell you organic mattresses is inherently odd. The Topical deals with this dilemma in a brilliant way: by finding advertisers who are on board with satirical ads. So when the host promotes a sponsor by saying, “If you can’t figure out what Cash App does just by the name, then you’re probably too stupid to use it,” it doesn’t feel out of place with his overall absurd remarks. That the show finds ways to promote other real daily news podcasts — such as Vox’s Today, Explained — by mocking them, is truly laudable.

Whether you want to pause the news or avoid it all together, The Topical is a refreshing delight.